The ACAP Seabird Bycatch Identification Guide is primarily intended for use at sea by fisheries observers to assist in the identification of albatrosses and some commonly caught petrels and shearwaters brought aboard after being killed in longline operations.  Where possible, species identification is based on those characteristics that are most likely to be preserved in dead birds that may have been underwater for long periods of time.  In most cases, these are primarily bill size and colour.  Because dead birds may look quite different to live birds, where possible, the photos included in the ID guide are of dead birds.  In some cases it will not be possible to identify a bird to a single species, but it should be possible in most cases to narrow the identification down to two or three possibilities.  For species with a restricted range, distribution maps have been added to eliminate them from the possible options. 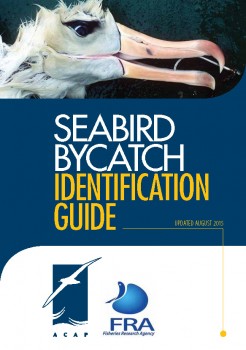 The guide covers 37 procellariiform species, including 30 of the 31 listed within the Agreement.  The ACAP-listed Balearic Shearwater Puffinus mauretanicus is not currently covered.  French, Spanish (both ACAP official languages) and Mandarin versions will be available next month, and Japanese, Korean, Portuguese and Chinese Taipei versions are expected to become available in October.  The ACAP Secretariat can be contacted for commercial print-quality files, in any of these languages, to print for users’ local needs. 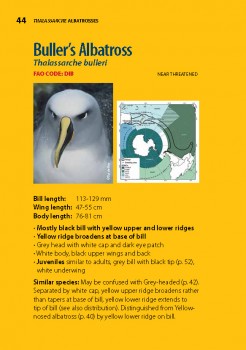 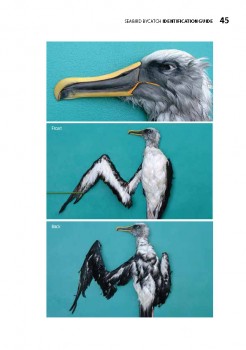 Text, map and identification photographs for Buller's Albatross Thalassarche bulleri from the guide

The Seabird Bycatch Identification Guide has been printed on glossy water-resistant card with a ring binding that allows it to lie flat, although individual users are encouraged to print and use it in the format that best suits their needs.  It has been produced and published (under a Creative Commons license) in collaboration with Japan’s National Research Institute of Far Seas Fisheries.  It is planned to produce an interactive, electronic version that could be used on mobile devices.

Top (10.6 ha) and Bottom (5.7 ha) Islands lie close together near the entrance to Port William in East Falkland in the Falkland Islands (Islas Malvinas)*, three quarters of a kilometre off the Cape Pembroke coastline.  Both islands are covered in Tussac Grass Parodiochloa flabellata. 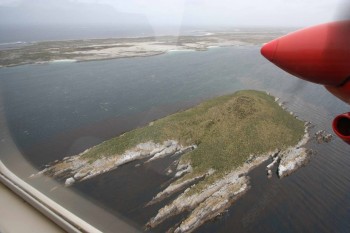 Top Island from the air, photograph by Nick Rendell 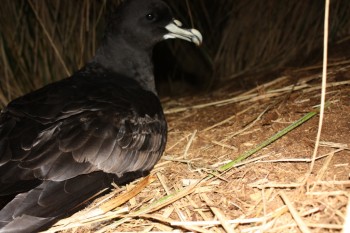 Visits under permit were made in October 2012 to both islands to survey for burrowing petrels.  White-chinned Petrels were found to be breeding on both islands, with the total breeding population likely to be of the order of tens rather than hundreds of pairs on Top but perhaps more on Bottom.  More accurate estimates were not feasible due to the difficulties encountered separating White-chin burrows from those of Magellanic Penguins Spheniscus magellanicus without the use of playback or burrowscope in the breeding season.

Sooty Shearwaters Puffinus griseus were first reported breeding on Top and Bottom Islands in 2001.  In 2012 it was estimated there were 8300 burrows of this species on Bottom Island and c. 18 000 on Top Island.  Grey-backed Storm Petrels Garrodia nereis may breed on Top Island based on a few small burrows found in 2012.

In September 2001 Norway or Brown Rats Rattus norvegicus were eradicated from Top and Bottom Islands by ground baiting.  Confirmation they had remained rat free came in 2009 and 2012 following site visits, with some evidence that the numbers of burrowing shearwaters had increased by 2012 as a consequence.

The two islands are Crown Land and have been proposed for inclusion in the National Nature Reserve (and the Important Bird Area – IBA) of Kidney and Cochon Islands.  A management plan for Kidney Island, Cochon Island and Top and Bottom Islands is currently under review.

White-chinned Petrels are known to breed at only two other localities in the Falkland Islands (Islas Malvinas)*: Kidney and New Islands.

With thanks to Clare Cockwell, Nick Rendell and Kalinka Rexer-Huber for information and photographs. 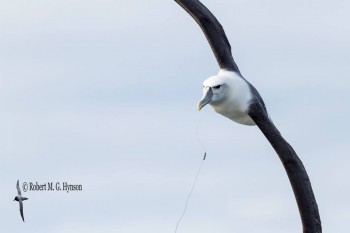 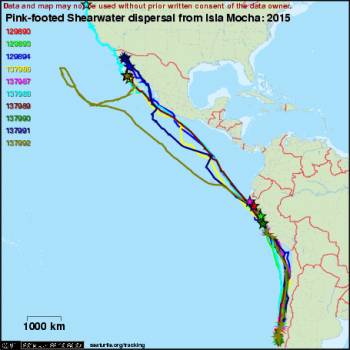 Protecting Seabirds in the Mediterranean: Advancing the Marine Protected Area Network Workshop to be held in Malta

“Within the Mediterranean seabirds face threats both on land and at sea, such as overfishing, by-catch, invasive predators, habitat destruction from poor planning and marine pollution. However only 4% of the Mediterranean is currently protected through the EU Natura 2000 network in Europe and the Barcelona Convention’s Specially Protected Areas of Mediterranean Importance.  At a regional scale there are still many important gaps to fill in the protected area network for seabirds, particularly for sites at sea. The meeting will enable scientists, nature conservationists and policy makers to further coordinate efforts for seabird protection at a regional scale through capacity building and the sharing of specialist knowledge.

The meeting will start with the presentation of a draft inventory of Marine Important Bird Areas for seabirds in Maltese and international waters identified under the LIFE+ Malta Seabird Project.  This will be followed by sessions on knowledge sharing and gap analysis for the entire Mediterranean region, identifying sites within and beyond national jurisdiction, priority areas and policy mechanisms from across the Mediterranean.”

Click here to read more about the workshop, including the meeting agenda and registration details.