“Since 2004 there has been mounting evidence of the severe impact of introduced house mice (Mus musculus L.) killing chicks of burrow-nesting petrels at Gough Island.  We monitored seven species of burrow-nesting petrels in 2014 using a combination of infra-red video cameras augmented by burrowscope nest inspections.  All seven camera-monitored Atlantic petrel (Pterodroma incerta Schlegel) chicks were killed by mice within hours of hatching (average 7.2±4.0 hours) with an 87% chick failure rate (n=83 hatchlings).  Several grey petrel (Procellaria cinerea Gmelin) chicks were found with mouse wounds and 60% of chicks failed (n=35 hatchlings).  Video surveillance revealed one (of seven nests filmed) fatal attack on a great shearwater (Puffinus gravis O’Reilly) chick and two (of nine) on soft-plumaged petrel (Pterodroma mollis Gould) chicks.  Mice killed the chicks of the recently discovered summer-breeding MacGillivray’s prion (Pachyptila macgillivrayi Mathews), with a chick mortality rate of 82% in 2013/14 and 100% in 2014/15.  The closely-related broad-billed prion (P. vittata Forster) breeds in late winter and also had a chick mortality rate of 100% in 2014.  The results provide further evidence of the dire situation for seabirds nesting on Gough Island and the urgent need for mouse eradication.” 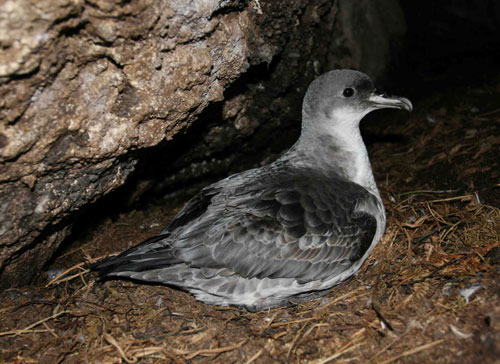 A one-minute video of an Atlantic Petrel chick being attacked by a mouse accompanies the publication.

With thanks to Alex Bond.

Can Wedge-tailed Shearwaters sniff out rats?

“Seabirds are particularly vulnerable to introduced alien mammalian predators, especially invasive rats, which are the main contributors to seabird extinction and endangerment in many places worldwide.  However, this appears context-dependent because, paradoxically, cases of apparent long-term coexistence between rats and some species of seabird have been reported for centuries, in various locations.  Among seabirds, procellariiforms are known to have developed a range of olfactory-driven behaviours, such as partner recognition and homing.  Olfaction could be an effective means of recognizing and thereafter avoiding invasive predators.  However, the role of olfaction in predation risk assessment has not yet been examined in any procellariiform.  Here, we investigated, through a Y-maze experiment, whether the wedge-tailed shearwater (Puffinus pacificus) avoided the odour of one of the most damaging alien predators on islands, the ship rat (Rattus rattus).  The experiment was conducted in different ecological contexts on three neighbouring islets off New Caledonia having different communities of invasive rats.  Contrary to our expectations, the wedge-tailed shearwater either did not detect or did not avoid the odour of the ship rat, despite about 175 years of coexistence between rats and shearwaters in New Caledonia.  These findings highlight the need for further investigations (across species, across sites) into the factors underpinning the paradox between high vulnerability and the surprising long-term coexistence between procellariid seabirds and alien invasive rats.”

Short-finned Squid in the diets of South Atlantic albatrosses 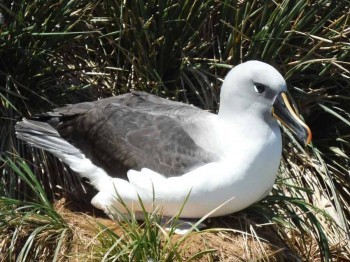 David Costantini (Department of Biology, University of Antwerp, Belgium) and Giacomo Dell'Omo have published in the on-line and open-access journal Conservation Physiology on assessing the health of Scopoli’s Shearwaters Calonectris diomedea by using biomarkers.

A major challenge in conservation physiology is to find out biomarkers that reliably reflect individual variation in wear and tear.  Recent work has suggested that biomarkers of oxidative stress may provide an additional tool to assess the health state of individuals and to predict fitness perspectives.  In this study, we assessed whether three biomarkers of plasma oxidative status predicted the following factors: (i) the resight probability as breeder in the next seasons; and (ii) the cumulative reproductive output over multiple years in Scopoli’s shearwaters (Calonectris diomedea) using a 7 year individual-based data set.  Our results show that shearwaters having higher levels of a marker of oxidative damage (reactive oxygen metabolites) in 2008 had a lower resight probability in the next years and a lower number of chicks raised from 2008 to 2014.  In contrast, two biomarkers of antioxidant defences (non-enzymatic antioxidant capacity of plasma and thiols) did not have any predictive value.  Increased concentrations of plasma reactive oxygen metabolites, together with the significant individual repeatability over time in this metric of oxidative stress found in numerous studies, suggest that this metric might serve as a blood-derived biomarker for health and fitness perspectives in birds and, possibly, also in other taxa.” 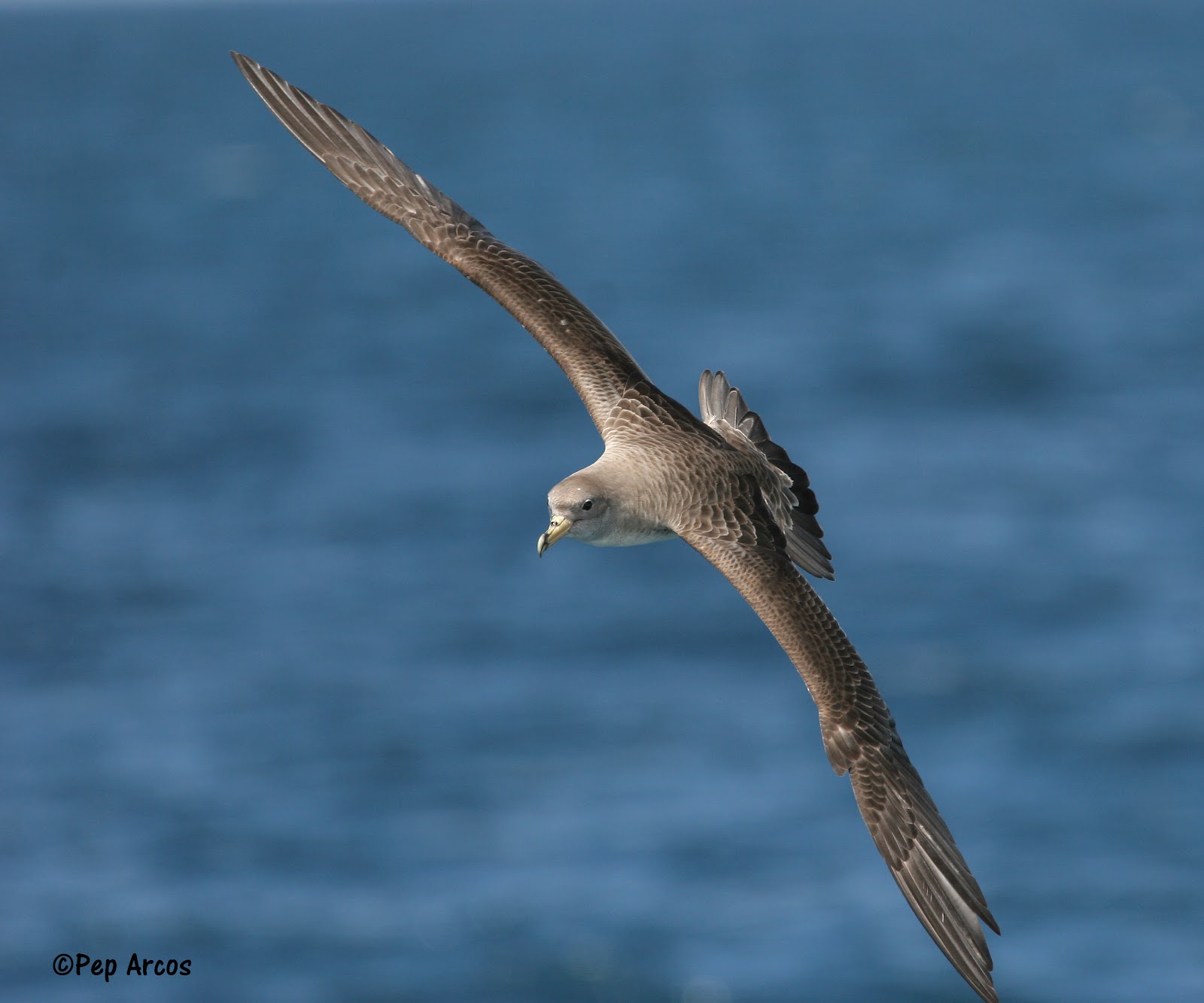 “The impacts of climate change on marine species are often compounded by other stressors that make direct attribution and prediction difficult.  Shy albatrosses (Thalassarche cauta) breeding on Albatross Island, Tasmania, show an unusually restricted foraging range, allowing easier discrimination between the influence of non-climate stressors (fisheries bycatch) and environmental variation.  Local environmental conditions (rainfall, air temperature, and sea-surface height, an indicator of upwelling) during the vulnerable chick-rearing stage, have been correlated with breeding success of shy albatrosses.  We use an age-, stage- and sex-structured population model to explore potential relationships between local environmental factors and albatross breeding success while accounting for fisheries bycatch by trawl and longline fisheries.  The model uses time-series of observed breeding population counts, breeding success, adult and juvenile survival rates and a bycatch mortality observation for trawl fishing to estimate fisheries catchability, environmental influence, natural mortality rate, density dependence, and productivity.  Observed at-sea distributions for adult and juvenile birds were coupled with reported fishing effort to estimate vulnerability to incidental bycatch.  The inclusion of rainfall, temperature and sea-surface height as explanatory variables for annual chick mortality rate was statistically significant.  Global climate models predict little change in future local average rainfall, however, increases are forecast in both temperatures and upwelling, which are predicted to have detrimental and beneficial effects, respectively, on breeding success.  The model shows that mitigation of at least 50% of present bycatch is required to offset losses due to future temperature changes, even if upwelling increases substantially.  Our results highlight the benefits of using an integrated modeling approach, which uses available demographic as well as environmental data within a single estimation framework, to provide future predictions.  Such predictions inform the development of management options in the face of climate change.”