Information for interested persons, students, scholars, and children on aspects of the biology and conservation of albatrosses, petrels and shearwaters. 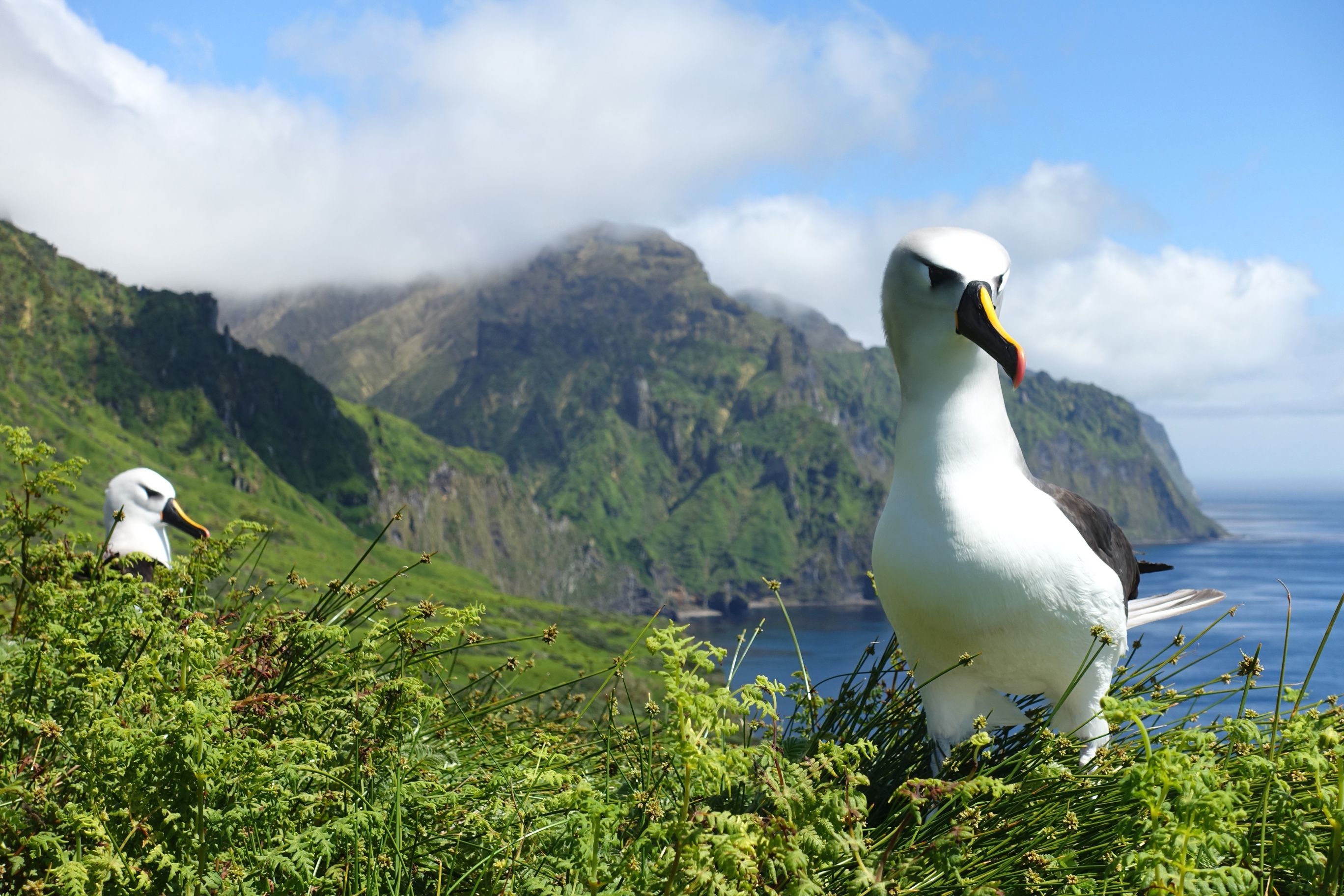 'Seabird' is a general term used to describe collectively any bird species which spends a substantial part of its life foraging and breeding in the marine environment.  Birds considered to be seabirds include  albatrosses, petrels, shearwaters, penguins, cormorants, gannets, boobies, frigate birds, tropic birds, some pelicans, auks and allies, skuas, gulls and terns. Some species of ducks and grebes also forage at sea but are not generally considered to be seabirds.

Here we consider those seabirds that are known to be at risk of extinction through the influences of human activities, principally commercial fishing. The species most at risk from this threat are birds of the avian taxonomic Order Procellariiformes. Birds in this order are collectively known as ‘tubenoses', because all of its members, grouped into four families, possess tubular nostrils.

Albatrosses, petrels and shearwaters are procellariiform seabirds which mainly breed on remote offshore islands and forage over the open sea. They can travel enormous distances across oceans during foraging flights and migratory journeys.  Albatrosses and petrels are perhaps the most threatened group of birds in the world. Of the world's 22 species of albatrosses, 15 are considered Critically Endangered, Endangered or Vulnerable according to the IUCN's 'Red-List' criteria (click here).

For some albatross and petrel populations, such as of the Tristan Albatross Diomedea dabbenena of the UK's Inaccessible Island, the Wandering Albatross D. exulans of Australia's Macquarie Island, the Amsterdam Albatross D. amsterdamensis of France's Amsterdam Island and the Short-tailed Albatross Phoebastria albatrus on the USA's Midway Atoll, numbers are so low (less than 50 breeding pairs each year; sometimes as few as just one or two) that they remain threatened with imminent extinction. Although individual nations are taking measures to protect albatrosses and their kin, these birds are susceptible to threats operating throughout their range. It is unlikely that conservation action by one nation will be effective in conserving highly migratory species such as albatrosses and petrels, and so clearly international action is required.  ACAP currently covers all of the World's 22 albatross species along with nine species of petrels and shearwaters: a total of 31 species.

Procellariiform seabirds spend much of their lives roaming the oceans in search of prey.   Most species tend to forage on their own, though large feeding flocks will gather at rich or passing food sources, both natural and artificial.  Squid, fish and krill are common sources of food.  Many species will follow fishing vessels, aggressively competing with each other for discarded fish, offal and baits.

Many seabirds, such as albatrosses and petrels, have long life spans with a few individuals known to live for more than 60 years. They have low rates of natural mortality. Albatrosses and petrels achieve sexual maturity at 5-12 years of age and breed in colonies on remote islands, with the pair bond being reinforced by elaborate courtship displays. Most species attempt to breed annually, although the larger albatrosses breed successfully only every second year (biennially).

Parental duties are shared by both sexes. Petrels and shearwaters may variously nest in simple scrapes on the ground, on cliff ledges, in a burrow or in a rocky crevice. Albatrosses and giant petrels Macronectes spp. breed on the surface and, where nest material is available, build large bowl-shaped nests of grass and mud. A single, large (relative to body size), white egg is laid with both parents sharing incubation for 35-85 days in alternating shifts. After hatching, chicks are brooded by their parents for a short period until they are able to regulate their own body temperature. After this period the chick is generally left alone, with parents returning to provide food at intervals. Both parents feed the chick until it fledges (departs to sea) at 110-304 days, depending on the species.

Procellariiforms occur widely across the world's oceans.  Nineteen of the world's 22 albatross species occur in the Southern Hemisphere.  Many species, such as Grey-headed Albatrosses Thalassarche chrysostoma, are extremely dispersive, spending most of their time over the surface waters of the high seas. In contrast, others, such as adult Shy Albatrosses T. cauta, tend to be more sedentary, regularly foraging over coastal waters throughout their adult lives.

Conservation of highly migratory species such as albatrosses and their kin cannot be achieved by one country acting independently of other nations which share the same species' populations. Because of this, in recent years countries which share populations of threatened seabirds have sought to take actions on an international level to complement policy and actions taken within their own jurisdictions.  The Agreement allows Parties to work together implement action plans to protect critical habitat, control non-native species detrimental to albatrosses and petrels, introduce measures to reduce the incidental catch of seabirds in fisheries, and support research into the effective conservation of albatrosses, petrels and shearwaters.

Past threats to procellariiform seabirds include being killed for their meat, eggs and feathers.  Modification of breeding habitats and introduced predators, especially feral cats, pigs and rodents (rats and mice), have impacted considerably on some populations. More recently, the global expansion of longline fisheries has posed one of the greatest overall threat to procellariiform seabirds, although trawling and gillnetting contunue to lead to the death of many albatrosses and petrels. 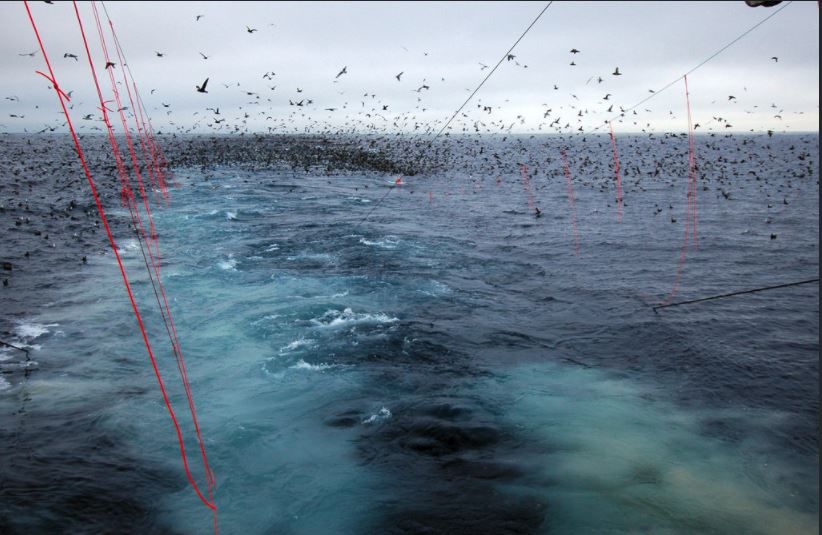 Twin bird-scaring lines with dangling streamers can keep seabirds away from both baited longlines and trawl warps, photograph by Amanda Gladics

Longline fishing is a method used to target finfish and shark species.  A longline consists of a main line with numerous baited hooks attached to branch lines. The line can be set relatively close to the sea surface (pelagic) or on the seabed (demersal). The number and type of hooks and the length of the branch lines depend on the target species.  Pelagic longlines can be up to 100 km long and carry a few thousand hooks. In contrast demersal longlines, although shorter in length, can hold more than 20 000 hooks. Each year thousands of seabirds are accidentally killed when birds ingest baited hooks during the setting or hauling of the line.  Birds hooked during setting are subsequently pulled under the water by the weight of the longline and drown. The level of mortality that occurs in longline fisheries poses risks of extinction for many populations of seabirds.

However, this threat can be greatly minimised by modifying fishing practice and adopting mitigation measures. These include the use of bird-scaring lines, weighted lines to reduce the amount of time baits are available to birds at or near the surface, setting lines only at night and seasonal closures of fisheries to avoid fishing when birds are more susceptible to being caught, such as around colonies during the breeding season.  Adoption of these measures promoted as "best practice" by ACAP has now virtually eliminated seabird bycatch in some (but by no means all) fisheries.

More recently, mortality in trawl fisheries has also been shown to be a serious problem for albatrosses and petrels, and mitigation measures are being adopted to reduce this threat. Seabird interactions with trawl vessels fall into two broad categories: those focused on the trawl warps (the thick cables that link the net to the vessel) with which birds collide when flying or which strike birds when they are feeding on fish waste in the water behind a vessel, and those focused around trawl nets that surface during hauling in which birds can become entangled when trying to access fish in the net. For reducing seabird strikes on trawl warps, the use of bird-scaring lines has proven to be the most effective mitigation method. However, the retention or strategic management of fish waste (offal and discards), which discourages birds from attending fishing vessels, is recommended as the most effective primary measure for bycatch reduction in trawl fisheries.

Gillnets have killed many of the smaller petrels and shearwaters by drowning birds when they become entangled. There have been relatively few studies of mortality of seabirds by gillnet fisheries, and development of mitigation measures for this gear type is still in its infancy.  Mitigation measures have been tested in only a few gillnet fisheries, and this work needs to be expanded to other areas where interactions with seabirds occur.