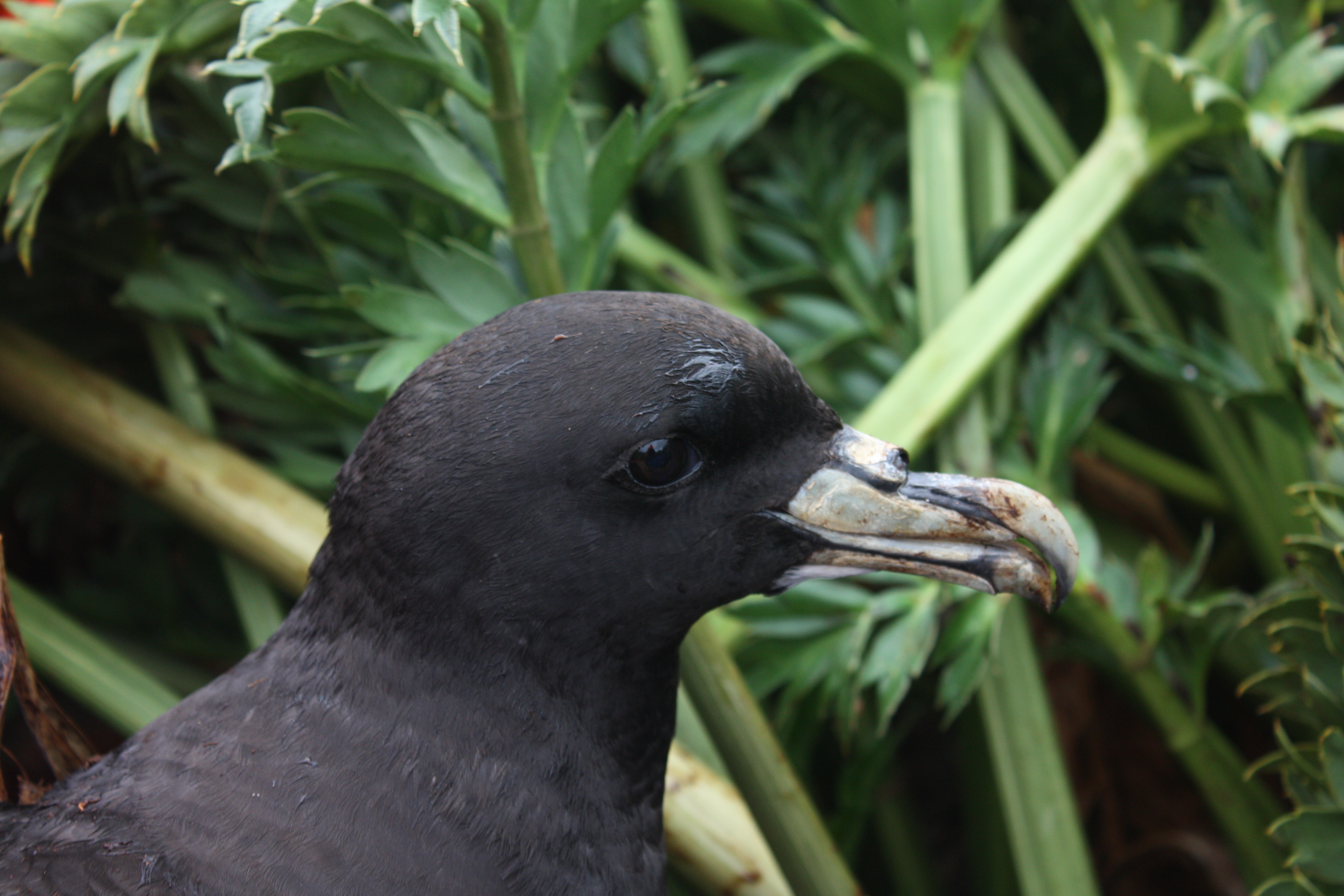 NOTE:  This post continues an occasional series that features photographs of the 31 ACAP-listed species, along with information from and about their photographers.  Here, Kalinka Rexer-Huber, of the New Zealand-based environmental consultancy Parker Conservation describes the research she has conducted on the globally Vulnerable White-chinned Petrel Procellaria aequinoctialis. 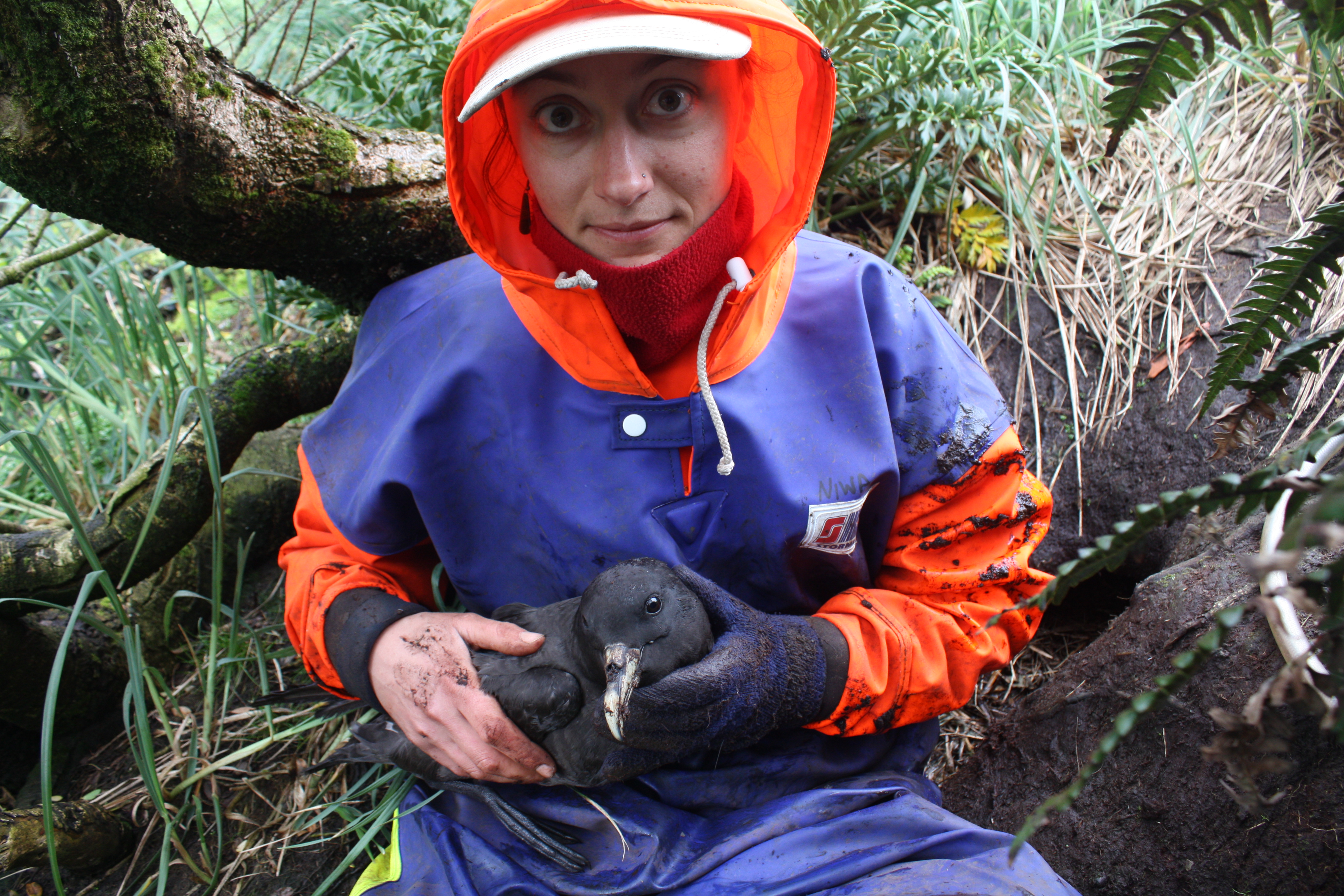 White-chinned Petrels hold a special fascination for me.  I first met them south of New Zealand, flying around effortlessly across an ocean that threw seas over the ship.  Then I encountered them on islets in the Falkland Islands/Islas Malvinas* - a small handful of burrows that felt like discovering buried treasure.  I was happy to find White-chinned Petrels abundant on South Georgia/Islas Georgias del Sur*, liberally spread out in colonies noisy with chatter and display.  But petrels were not on my dance card, so my interest had to wait.  Meanwhile there were more ships enabling at-sea surveys of various kinds in the Falklands/Isla Malvinas*and back in New Zealand with more White-chinned Petrels to be recorded.  I was alarmed to learn then that this burrowing petrel is the seabird species most caught as bycatch by fisheries in the Southern Hemisphere. 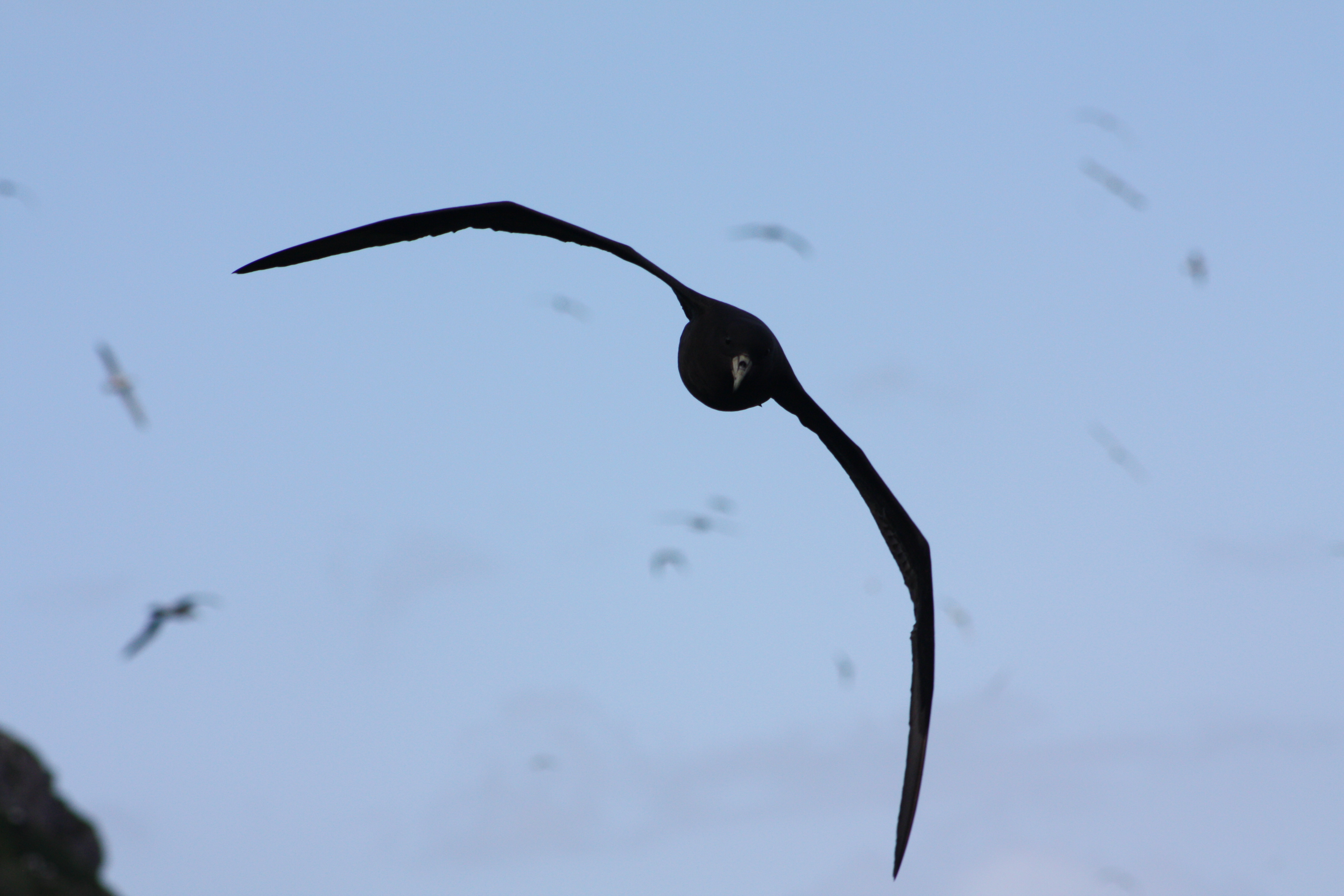 A White-chinned Petrel flies past the cliffs of Disappointment Island

My interest in White-chinned Petrels had to wait ten years until I could properly engage in all those brewing questions.  How many are there?  Where do they go to at sea?  Do different island populations forage in different areas, and how do they overlap with our fishing effort?  How are these different island populations related? It turns out that satisfactorily answering any one of these questions involved digging into the next, so I spent my PhD research at the University of Otago in Dunedin trying to pull together the lot. 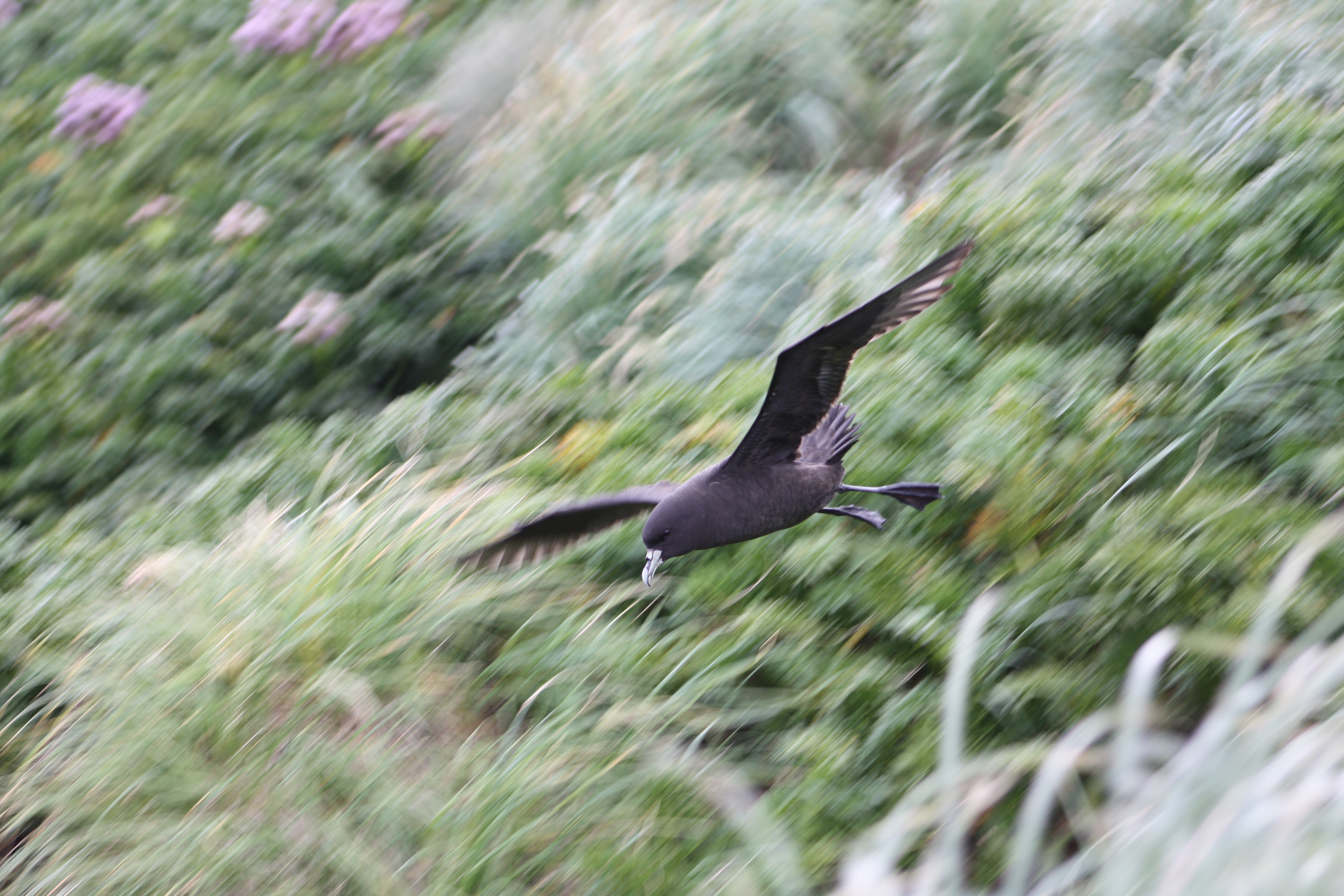 In flight over a breeding colony on Disappointment Island.  Unlike smaller burrowing petrels, White-chinned Petrel do come ashore and land during daylight hours

The how many are there question was least known for two of the New Zealand populations (Auckland and Campbell Island groups).  Population size estimates involve getting a good count of all the burrows, and then finding out what is in them.  The challenges of vegetation, other wildlife and the White-chinned Petrel’s apparent preference for some steep and rugged country. 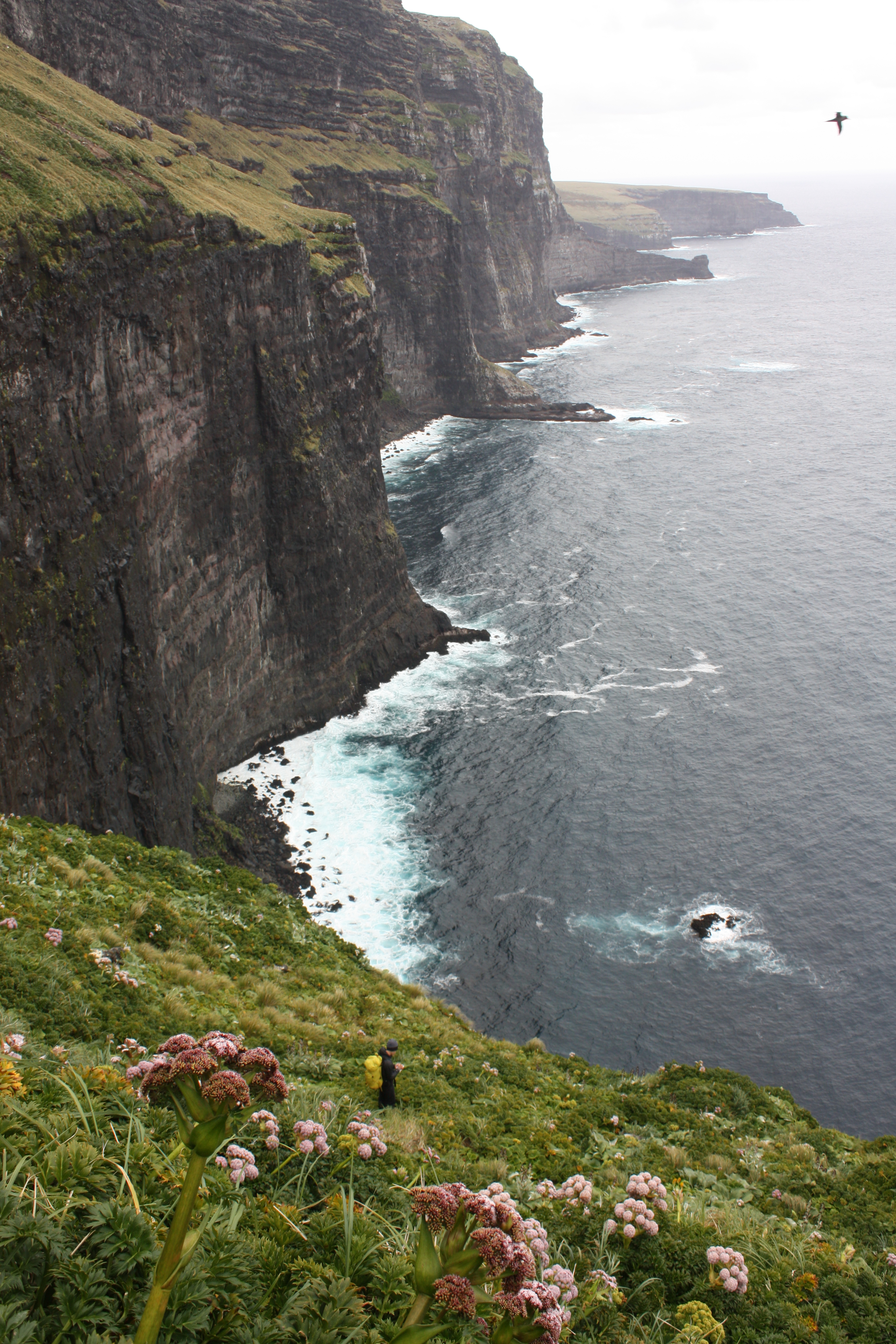 But questions about differences in island populations cannot be properly answered without data from all of them.  White-chinned Petrels breed on a number of island groups ringing the Southern Ocean: Marion, Prince Edward, Crozet, Kerguelen, Auckland, Campbell, Antipodes, Falklands/Islas Malvinas* and South Georgia/Islas Georgias del Sur*.  Researchers studying White-chinned Petrels at several of these localities have generously offered tracking data and blood samples from their work, and we did our best to fill the gaps by tracking and sampling at Auckland and Campbell Islands. 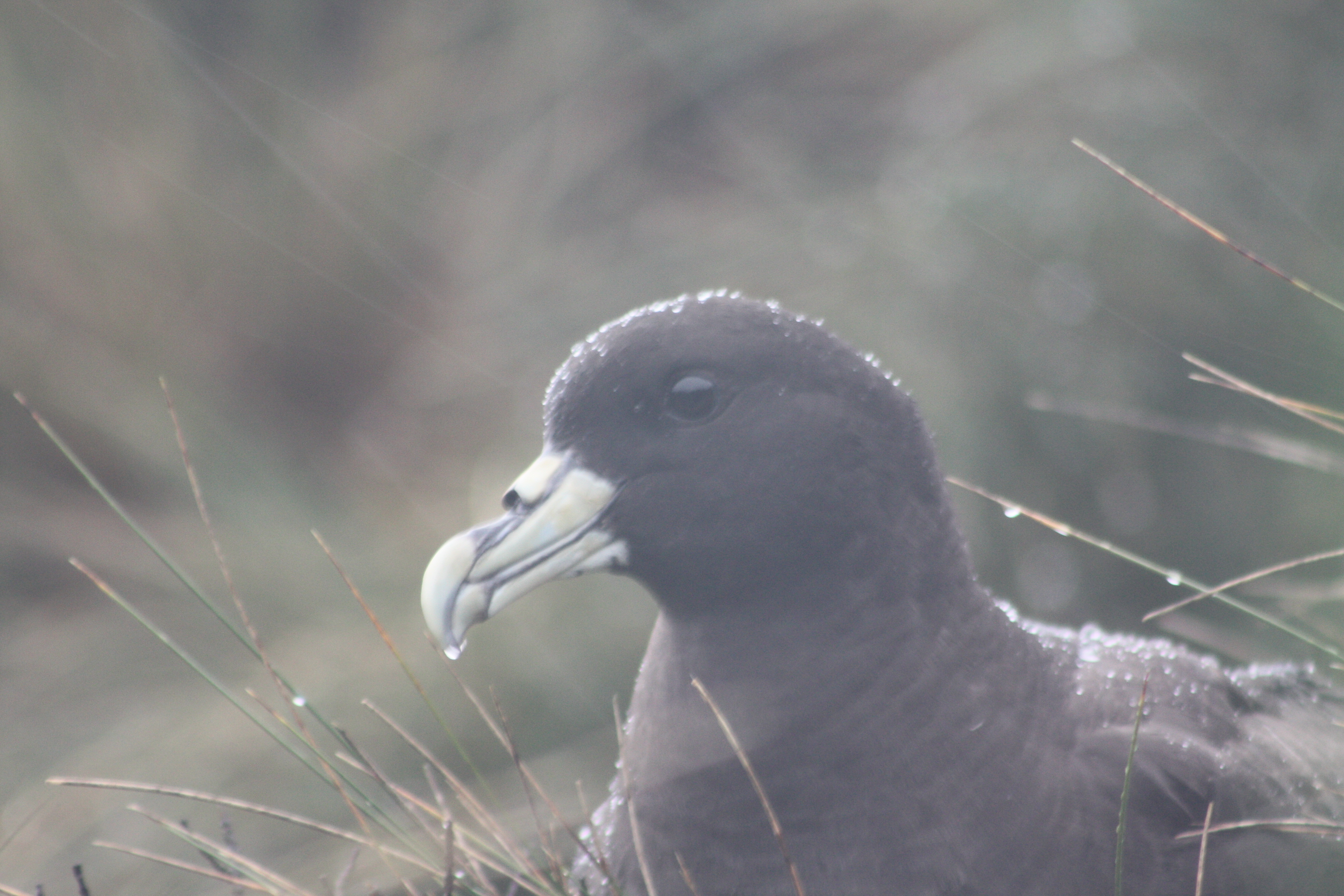 Out in the open on a rainy day on Disappointment Island, Auckland Islands

We are finding that New Zealand is home to a good quarter of the global White-chinned Petrel population; that they are returning to the main Campbell Island after being extirpated by rats (now eradicated); that petrels from different island populations do not share much of their foraging areas during the breeding season, but do overlap during their down-time in wintering areas; and that genetic differences show the species divides by oceanic basin into three evolutionarily significant units for management purposes. 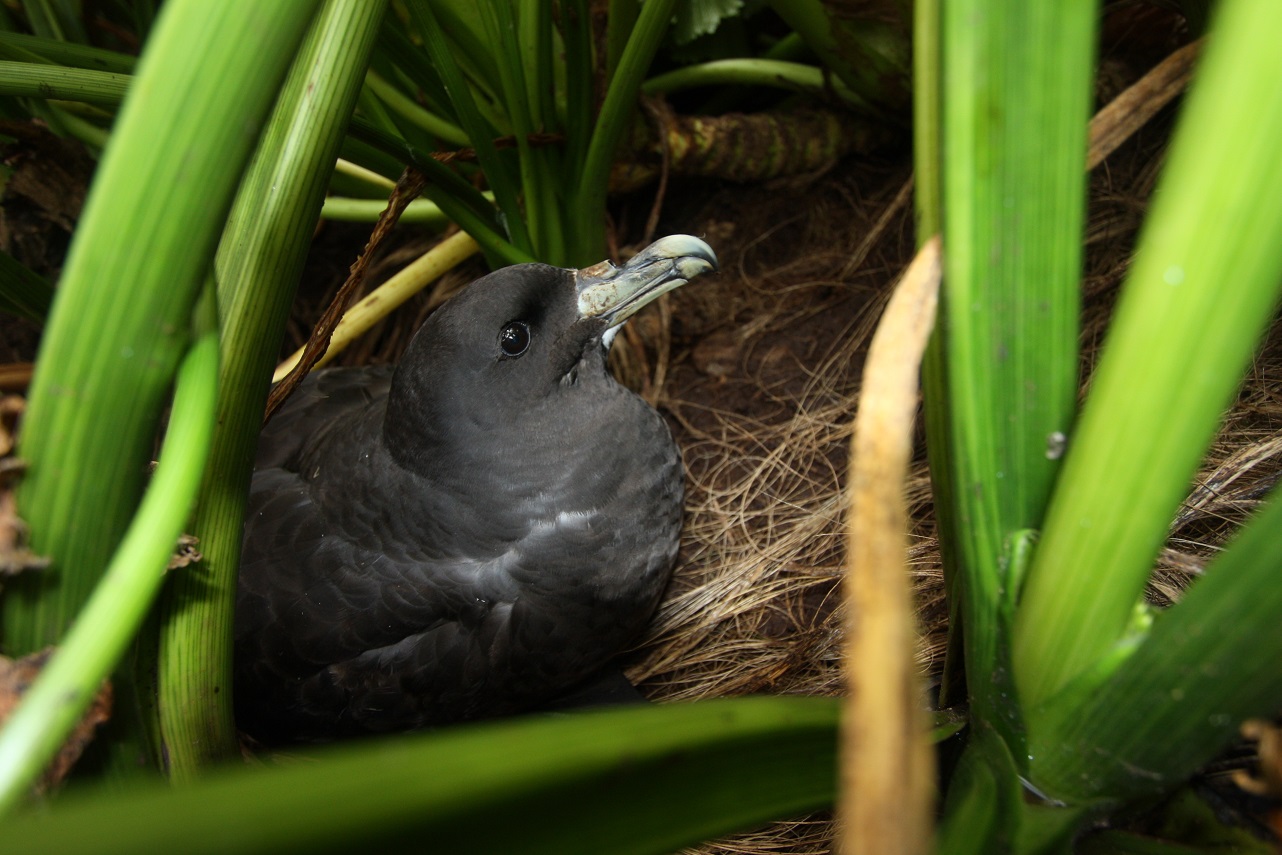 Those studies weren’t enough to get White-chinned Petrels out of my system.  I am now digging more into fisheries data to see what the tracked petrels can tell us about key areas and times when petrel fishing overlaps with human fishing, and what population(s) could benefit from targeted intervention there.  Our banding study in the Auckland Islands is simmering away.  There are limited opportunities to revisit the study colony, but every banded White-chinned Petrel in the hand adds to our ability to eventually look at adult survival.