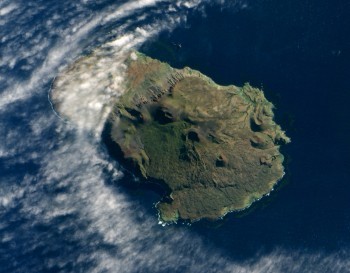 Prince Edward Island is the smaller of the two Prince Edward Islands, South African property in the southern Indian Ocean.  Unlike its larger neighbour with its year-round weather and research station, Marion Prince Edward is uninhabited and is only visited by researchers at four-year intervals to reduce the risks of introducing alien species.  No tourism is allowed.  The Prince Edward Islands are a Special Nature Reserve, a Ramsar Wetland of International Importance since 2007 and are surrounded by a recently declared large Marine Protected Area.  The islands’ 1996 management plan is to be replaced by a new plan that is waiting on formal adoption. 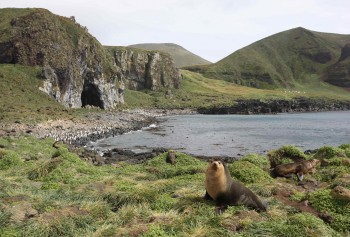 The photo above shows the Annexation Cave with its 1948 flagpole at Cave Bay.  Across the bay and behind the Subantarctic Fur Seal Arctocephalus tropicalis can just be discerned a tented camp. 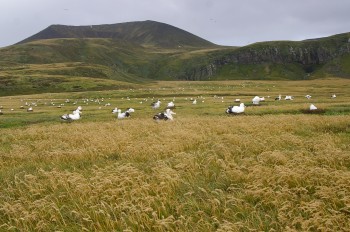 Prince Edward Island supports nine regularly breeding ACAP-listed species: five albatrosses and four petrels.  For its size it has a large number (approaching one quarter of the World population) of breeding Wandering Albatrosses Diomedea exulans, notably in Albatross Valley, as shown here, and on the west coast where the birds breed at high densities. 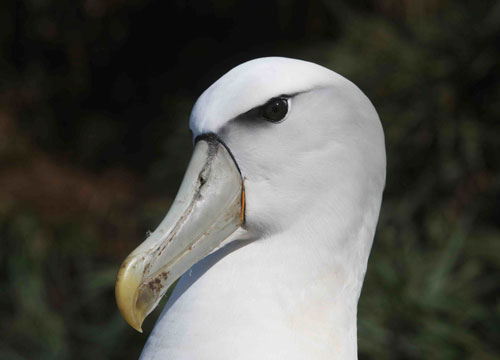 A “Shy-type” Albatross (thought probably to be a White-capped Thalassarche steadi) was found incubating on Prince Edward in a mixed colony of Grey-headed T. chrysostoma and Indian Yellow-nosed T. carteri Albatrosses in December 2008, making it the 10th ACAP-listed species recorded on the island.  Its partner is unknown (click here). 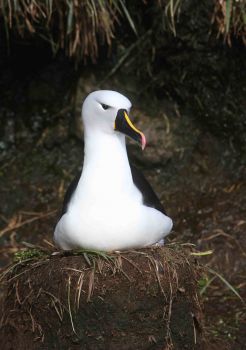 With no House Mice Mus musculus on the island (unlike Marion), the grasses seed profusely and so the vegetation in the Indian Yellow-nosed Albatross colony is lush. 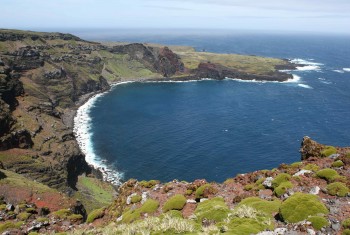 Both Sooty Phoebastria fusca and Light-mantled Sooty P. palpebrata breed on the coastal cliffs of Prince Edward, including here above McNish Bay in the south-west of the island.  The remaining ACAP-breeding species are the two giant petrels Macronectes spp. and the Grey Procellaria cinerea and White-chinned Petrel P. aequinoctialis.

With thanks to Bruce Dyer and Peter Ryan for photographs.