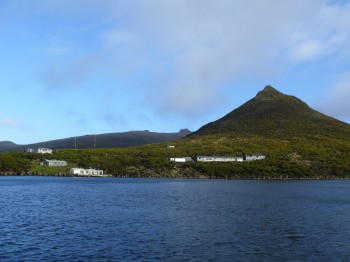 Campbell Island is the southernmost of New Zealand’s sub-Antarctic islands, approximately 700 km south of the mainland, and together with the other four sub-Antarctic island groups in the region forms part of a World Heritage Site, in addition to being a National Nature Reserve. As well as Campbell Island itself (113 km²), the group consists of several smaller islets, including Dent (0.23 km²) and Jacquemart (0.19 km²). The island has a varied human history: most of the buildings shown here in Perseverance Harbour supported a meteorological station, now automated. The intention to create a large marine reserve around the island has been declared. 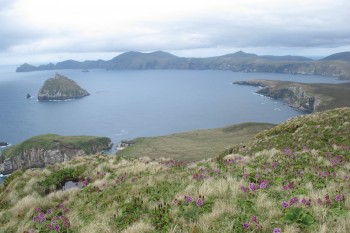 Campbell Island is a remnant shield volcano, with most volcanic activity thought to have been centred on Northwest Bay and Dent Island, seen here. During the time the main island was infested with introduced feral cats Felis catus and Norway or Brown Rats Rattus norvegicus islets such as Dent served as refuges for a wide range of smaller seabirds and land birds, including the endemic Campbell Island Teal Anas nesiotis. All introduced mammalian pests were finally removed with the eradication of the rats in 2001. Subsequent colonisation of the main island by shearwaters, prions and petrels has been relatively slow. The pink flowers are Pleurophyllum speciosum and Anisotome latifolia, two of the island’s megaherbs. 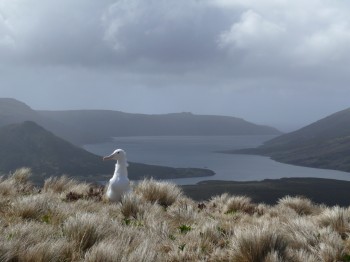 Campbell Island supports nine breeding ACAP species. Southern Royal Albatross Diomedea epomophora breed over much of the upper slopes and ridges among tussock and megaherbs. This chick is close to fledging from a ridge high above Perseverance Harbour in the background. 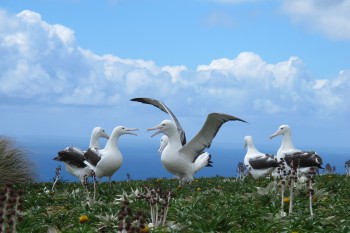 Campbell Island is the stronghold for the Southern Royal Albatross with about 8500 breeding pairs between 2004 and 2008. 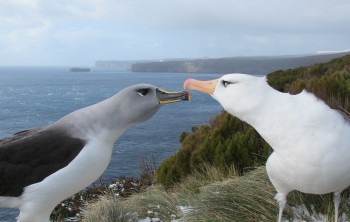 At the northern end of Campbell Island Grey-headed Thalassarche chrysostoma and Campbell T. impavida Albatrosses breed in mixed colonies on cliff ledges and slopes. The most recent population estimates for these two species (1995 to 1997) reported 7800 and 246 00 pairs, respectively. There are additionally a small number of Black-browed Albatrosses T. melanophris among the Campbell Albatrosses, with which they hybridise. 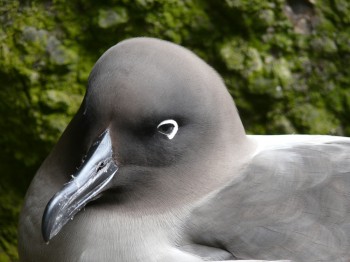 Light-mantled Sooty Albatrosses Phoebetria palpebrata nest in small, scattered groups on coastal cliffs in inland bluffs throughout the Campbell Archipelago. There has yet to be a comprehensive census of the Campbell population, and this species remains one of the least-studied of New Zealand’s albatrosses. 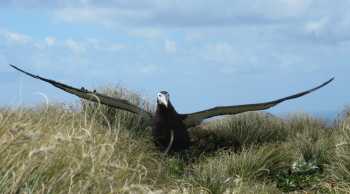 The Antipodean Albatross D. antipodensis completes the roll-call of six albatross species at Campbell Island. This soon-to-fledge chick is a relatively rare sight on the island, with less than 10 pairs breeding in any year. Antipodes Island to the north-east of Campbell supports the vast majority of the population of this species. 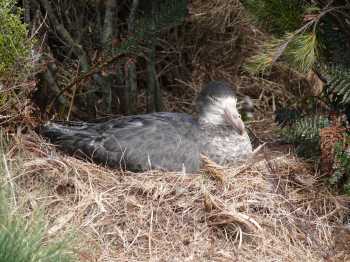 Northern Giant Petrels Macronectes halli breed across the island in small groups; breeding locations can shift markedly from year to year. This nest is located in Perseverance Harbour among Prickly Shield Fern Polystichum vestitum and Grass Tree Dracophyllum sp. scrub. In 1996/97 there were 234 nests at Campbell Island. 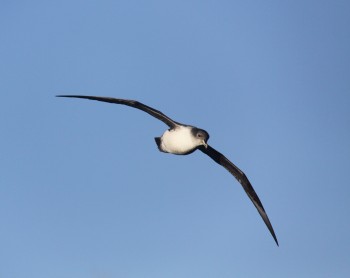 Two ACAP-listed petrels breed at the Campbell Archipelago. The White-chinned Petrel Procellaria aequinoctialis breeds on offshore islets and is likely to be re-colonising the main island following rat eradication, whereas the winter-breeding Grey Petrel P. cinerea, seen here, survived on Campbell in the presence of rats and cats. Accurate population estimates for both species at Campbell are still required.

Moore, P.J. 2004. Abundance and population trends of mollymawks on Campbell Island. Science for Conservation No. 242. Wellington: Department of Conservation. 62 pp.