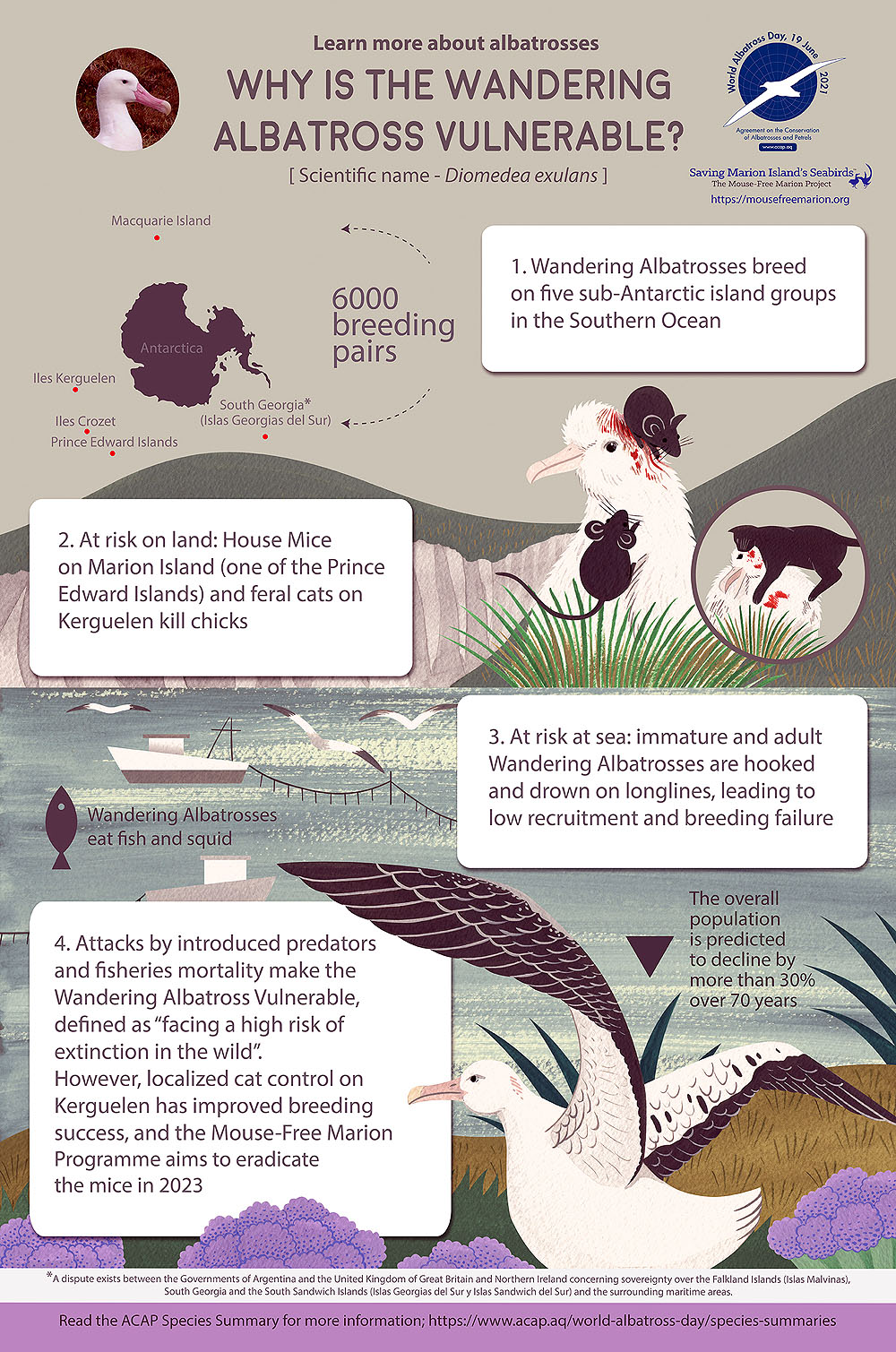 Earlier in the year ACAP Latest News posted two infographics depicting the conservation threats faced by the Critically Endangered Tristan Diomedea dabbenena and Waved Phoebastria irrorata Albatrosses in support of this year’s World Albatross Day on 19 June and its chosen theme “Ensuring Albatross-friendly Fisheries”.  The infographics are available as downloadable posters in the three ACAP official languages of English, French and Spanish.  A Portuguese version of the Tristan Albatross infographic is also available because the species regularly visits the waters of Brazil (click here).

A third infographic, that for the globally Vulnerable Wandering Albatross D. exulans, is being launched today to mark the second day of ‘WADWEEK2021’ that ends with the second World Albatross Day on Saturday 19 June.  This time the new infographic has been part sponsored by Environmental NGO, BirdLife South Africa, to help draw attention to the plight of Wanderers on sub-Antarctic Marion Island where introduced House Mice have taken to attacking and killing their chicks.  As a consequence, the NGO is working with the South African Department of Forestry. Fisheries and the Environment (DFFE) to eradicate the mice in 2023, in a partnership known as the Mouse-Free Marion Project.  The infographic also draws attention to the Wandering Albatross chicks that are being killed by feral cats on the French island of Kerguelen (click here).

All three infographics have been designed to help inform the general public, including school learners.  They serve to complement the more detailed and referenced ACAP Species Assessments and the more concise and illustrated ACAP Species Summaries.

In what is hoped to be a series that eventually includes all 22 species of albatrosses recognized by ACAP, the next infographic to be produced later this year will be of the New Zealand endemic (and globally Endangered) Antipodean Albatross D. antipodensis.  This infographic will be sponsored by that country’s Department of Conservation.

With thanks to Mark Anderson, Alistair McInnes and Anton Wolfaardt of BirdLife South Africa for part sponsorship and comments, illustrator Namasri  Niumim who has produced all three infographics with patience and good humour and Michelle Risi for the original concept design.  The Wandering Albatross infographic was additionally improved by comments received on drafts from Christophe Barbraud, Richard Phillips and Stephanie Prince.  Thanks to all.