"All for One, One for All - Albatross" painted by Kitty Harvill for World Albatross Day accepted for virtual international exhibit 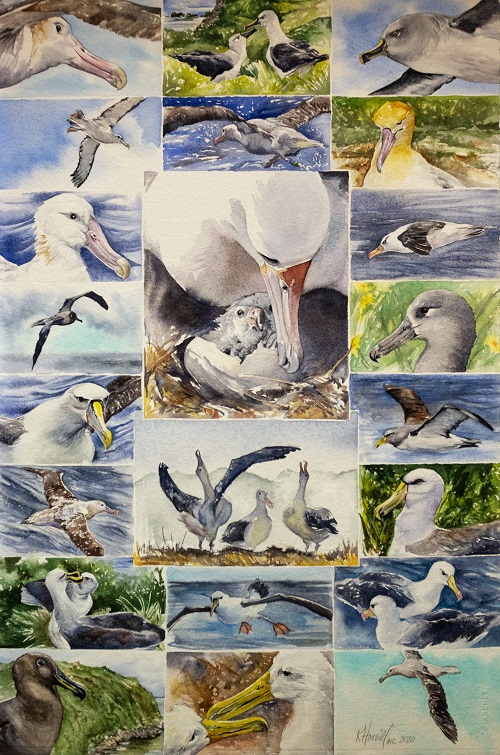 “All for One, One for All – Albatross” by Kitty Harvill

Artists for Conservation (AFC) is holding its annual International Exhibit of Nature in Art this month.  Kitty Harvill, co-founder of Artists and Biologists Unite for Nature (ABUN) writes that she is proud to have her 22 x 15 inch [56 x 38 cm] painting “All for One, One for All – Albatross” depicting all 22 species of albatrosses accepted into this year's juried exhibition.  Her piece was originally created for this year’s first World Albatross Day (WAD2020) on 19 June.  It is available for free downloading as a high-quality poster suitable for printing out and framing (along with several other posters created from art by ABUN members). 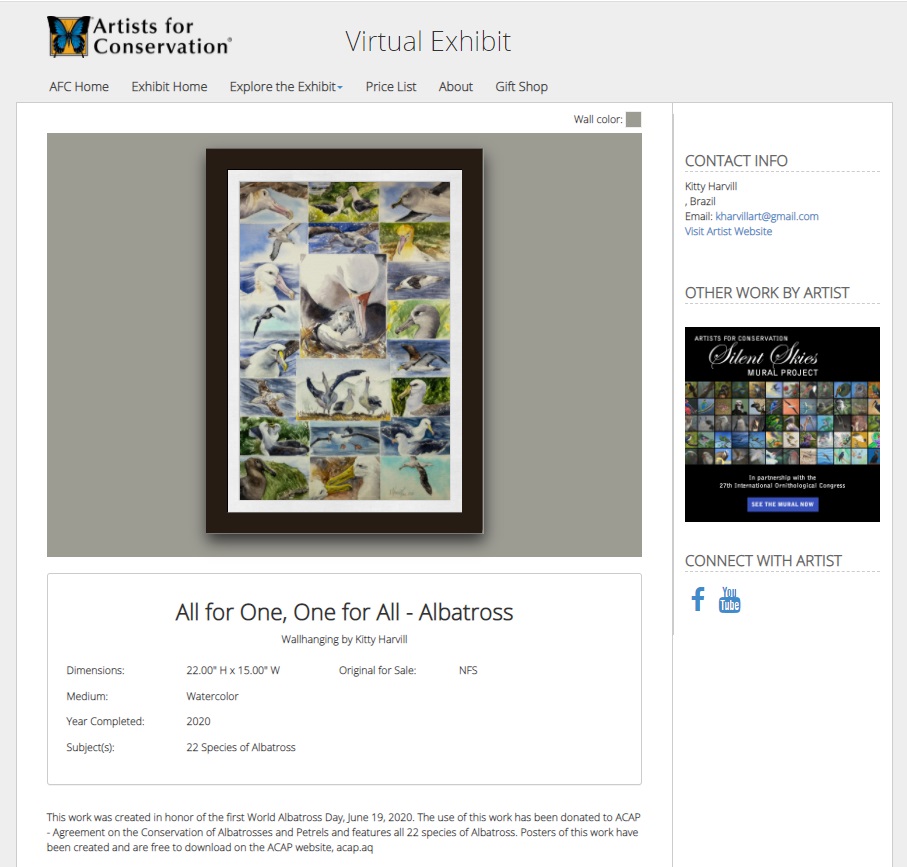 “All for One, One for All – Albatross” displayed online in the virtual exhibit

AFC states on its website that it holds the world's top conservation-themed art exhibit and sale.  Most of the artwork in the exhibit is for sale with at least 40% of proceeds benefiting conservation and environmental education, with each artwork dedicated to supporting a conservation organization of the artist's choice.  However, Kitty’s albatross work is marked not for sale.  View all the artwork in this year's virtual exhibit here.

With thanks to Kitty Harvill.

Another sighting of a Black-browed Albatross in the northern hemisphere 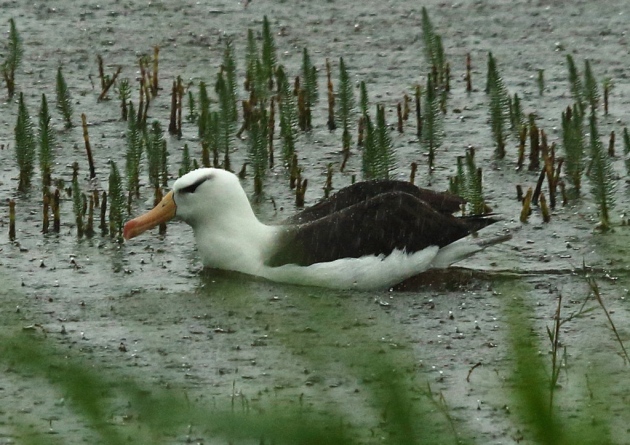 Black-browed Albatrosses Thalassarche melanophris are meant to be strictly birds of the higher latitudes of the southern hemisphere but occasionally individuals are seen north of the equator.  The latest sighting to hand is of a bird, reported to be an adult, that was spotted flying south down the United Kingdom’s Suffolk coastline on 28 September.  The albatross was first seen two miles (3 km) out to sea near Lowestoft by a local birder (click here).   “It is understood to be only the second recorded sighting of the species in Suffolk – having last been seen off the North Sea and at the RSPB Minsmere Reserve in July 2015.”

Sightings of single Black-browed Albatrosses are made north of the equator in the Atlantic Ocean from time time (click here), including in recent years from Canada and from Denmark.  Perhaps last month’s bird was the same one that was seen farther north on the English coast sitting with Northern Gannets on the Bempton Cliffs in July this year (click here).  Read more earlier UK records of Black-browed Albatrosses here

Review: Oceanic Birds of the World: a Photo Guide by Steve Howell and Kirk Zufelt 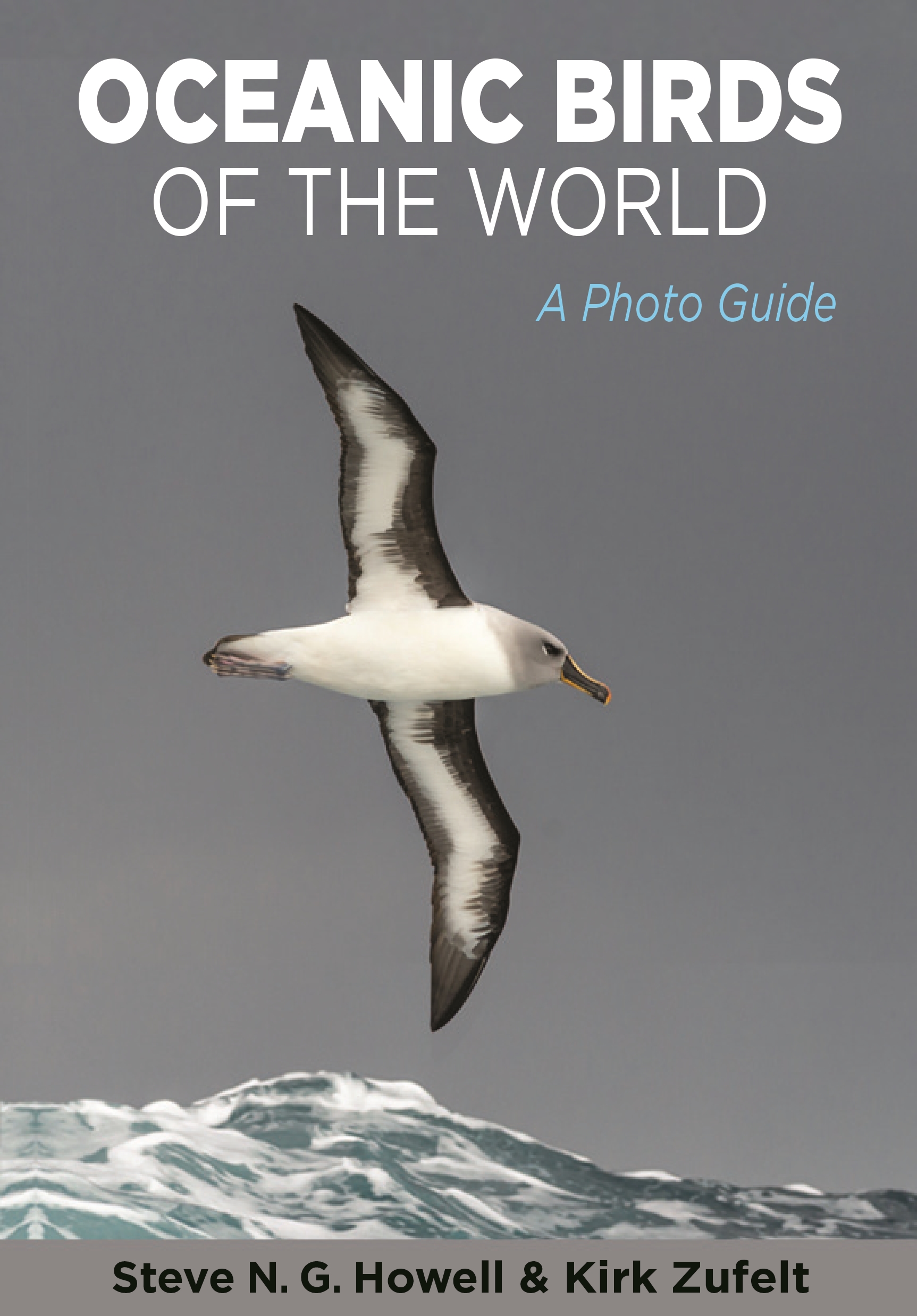 Those who watched seabirds at sea and from the shore back in the 1980s and 1990s (like I did) would have used one or both of Peter Harrison’s two seabird books; the iconic guide of 1983, and the photo guide that followed it in 1987, to help them with their IDs.  Quite a lot has changed with seabirds and their study since then, for just one example think digital cameras with stabilized lenses that allow such crisp photographs that they can be used to score wing moult in birds flying alongside a ship at sea.  There have also been significant changes in the classification of birds with a tendency of late to give specific status to more populations; so more species are now out there to photograph and describe in their various age classes.  Time then for new guides for the seabirder’s shelf and backpack.

For photo guides the gap has been nicely filled with last year’s publication by Steve Howell and Kirk Zufelt of Oceanic Birds of the World: a Photo Guide.  Before getting too far into a review, let’s see what the authors consider is an “oceanic bird” - and what are not.  The true “pelagics” are all included, the whole tubenose order Procellariiformes (albatrosses, petrels and their kin), as are all the penguins, with 19 species recognized.  Among the Pelecaniformes in go the frigate birds, tropic birds and sulids (gannets and boobies) but no marine cormorants or pelicans get a look in.  Farther along in the book we can find the skuas (jaegers) and alcids (auks and allies), but only 19 species of gulls, terns and noddies among the 50+ larids in the world, the majority of which are marine birds.  Surprisingly to me, both Arctic and Antarctic Terns, which migrate across vast swathes of open ocean far from land, are not included.  Here’s the rub then, that every author of a seabird book has come up against: define by taxonomy or habitat?  Every seabird book I know has got into a muddle over this, mixing both approaches, including the book under review, leading to some oddities.  For example the African and Galapagos Penguins occur closer to the land than do the missing terns mentioned above when migrating, and do not really go farther offshore than the equally missing marine cormorants and pelicans  One way out of this conundrum might have been to have a photo guide purely for the tubenoses.  However, it is only fair to say that the authors address the thorny issue in their preface, admitting the “inevitably subjective nature” of choosing which species to include.

A total of 213 pages of the 358-page book is devoted to the albatross and petrel order; the rest of the “more than 270” seabirds covered get only 82 pages in the main species accounts section.  The tubenoses need all this space as there are a lot more albatrosses and petrels to depict and describe than Peter Harrison had.  This has come about by ‘splitting’ (now 22 albatross species in four genera, as opposed to 13 and only two back in the 1980s), but also by new discoveries (for example Bryan’s Shearwater Puffinus bryani first described in 2011).  Howell and Zufelt are nothing but up to date with their new species.  In fact, an intriguing four-page section towards the back of the book is entitled “Recently described and provisionally split species” where you will find a bunch of new tubenoses, some not yet formally described, with suggested names; “Darwin’s Storm-petrel” being just one example.  The authors consider themselves birders “free from the bureaucratic molasses that taxonomists have created for themselves” who can “catch up later”!

For each bird in the main text you will find LOTs of photos (the book’s back-cover ‘blurb’ says over 2200).  I counted no less than 36 (may well have missed some) for the Wandering Albatross Diomedea exulans (called ‘Snowy Wandering’ by the authors).  In contrast the Harrison photo guide has only two!  Nearly all of these 36 Wanderer photos depict birds in flight, a feature throughout the book.  Even Bryan’s Shearwater gets three photos – and one imagines there would be more if the authors get a chance to photograph it themselves.  Along with the plethora of photos comes the usual field guide information on identification, especially in flight with attention to age classes and gender differences where such apply.  You also get information on size, distribution (with maps) and on moult. 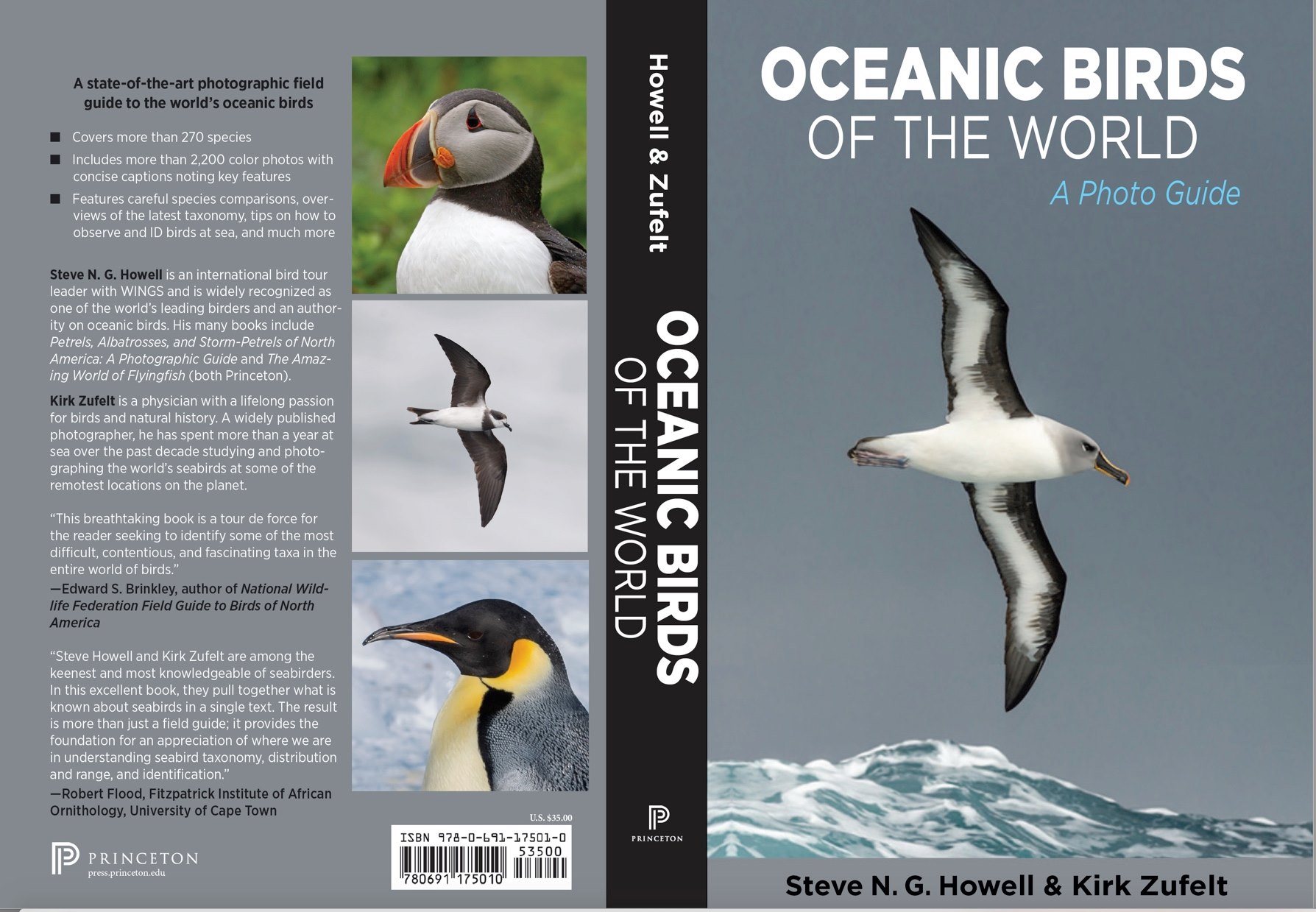 Field guides are taken into the field, in this case to sea.  They need to survive rough treatment, including getting wet.  Howell and Zufelt’s Oceanic Birds is a soft cover printed on glossy paper to help with moisture from sea spray on a ‘pelagic’ trip.  The sections are stitched but only time will tell how well the book stands up.  As now pretty much an armchair marine ornithologist my own copy is not getting properly tested so someone younger than myself can report in a couple of years perhaps.

Overall, the book has a distinctly ‘crowded’ look with bled photos and narrow margins top and bottom – but that means you get “bang for your buck”, as the North American authors might say.  There’s a lot more I’ve not mentioned to be found in Oceanic Birds.  Gotta be an essential in any reasonable seabird library! 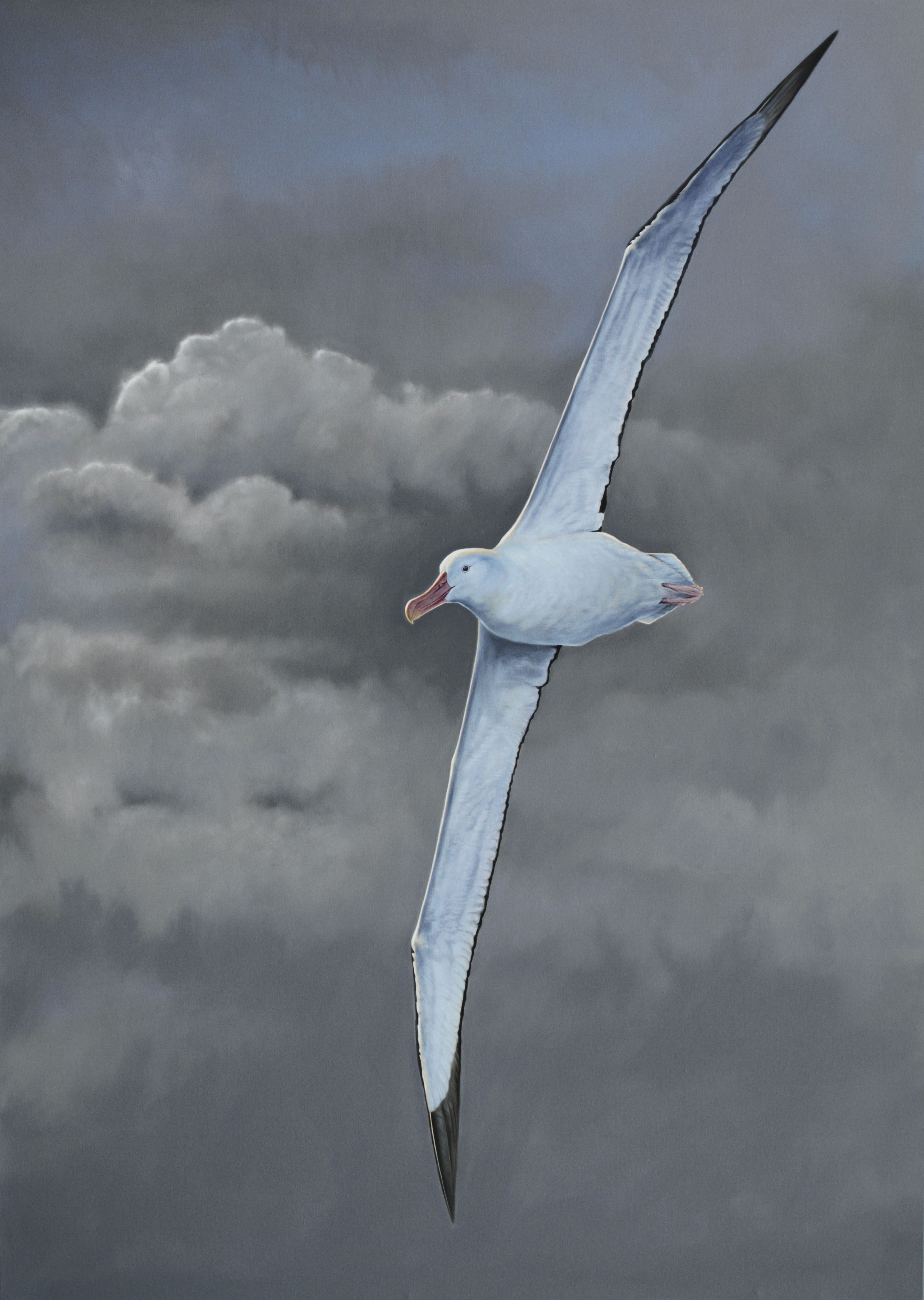 “Big birds deserve to be painted BIG and a 12-kilogram Wandering Albatross with her 3.3 metre wingspan needs a substantial canvas.  Here is 'Southern Ocean Wanderer' on a 170 x 120 cm stretch canvas, painted with a building storm as a background”

Brett Jarrett is a wildlife artist and illustrator based in Narrawong, a small town in Victoria, Australia, where he paints in oils on canvas and exhibits in his own gallery ‘Bay of Whales’ – which doubles as a coffee shop.  Brett's first Antarctic expedition was with the Australian Antarctic Division in 1996, working with Weddell Seals.  In subsequent expeditions he has worked as an artist and wildlife guide, collectively working on and around the Antarctic Continent for nearly three years.  Brett was the main artist for A Complete Guide to Antarctic Wildlife written by Hadoram Shirihai and published in 2002, with a second edition in 2007, producing all but three of the 35 full-page plates of seabirds, seals and cetaceans.  With the number of images on each plate they were painted quite large, with most being 74 x 53 cm. 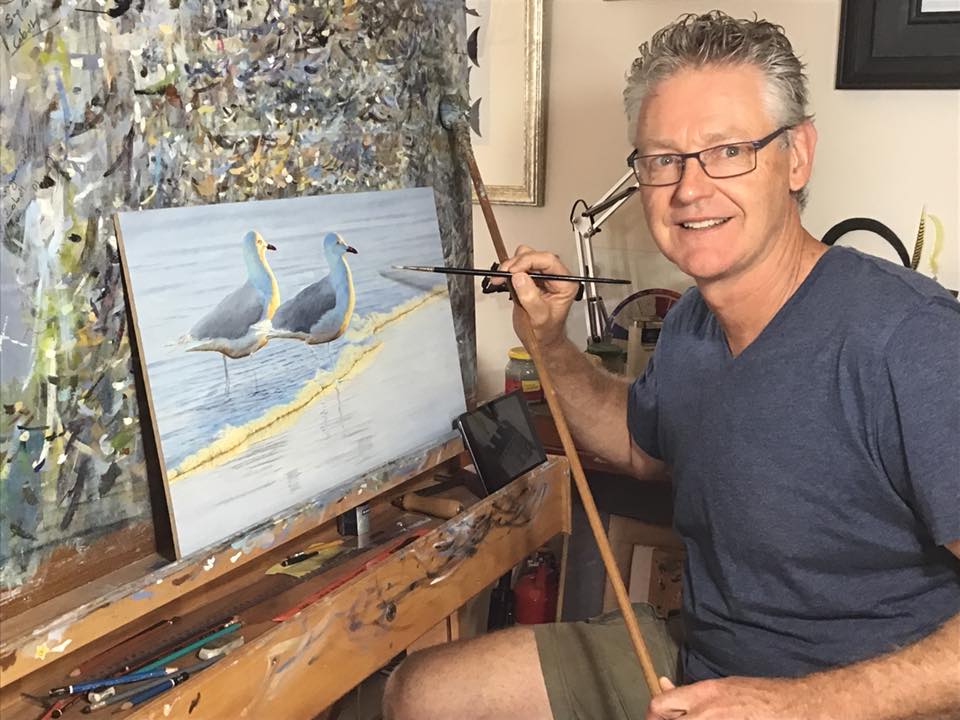 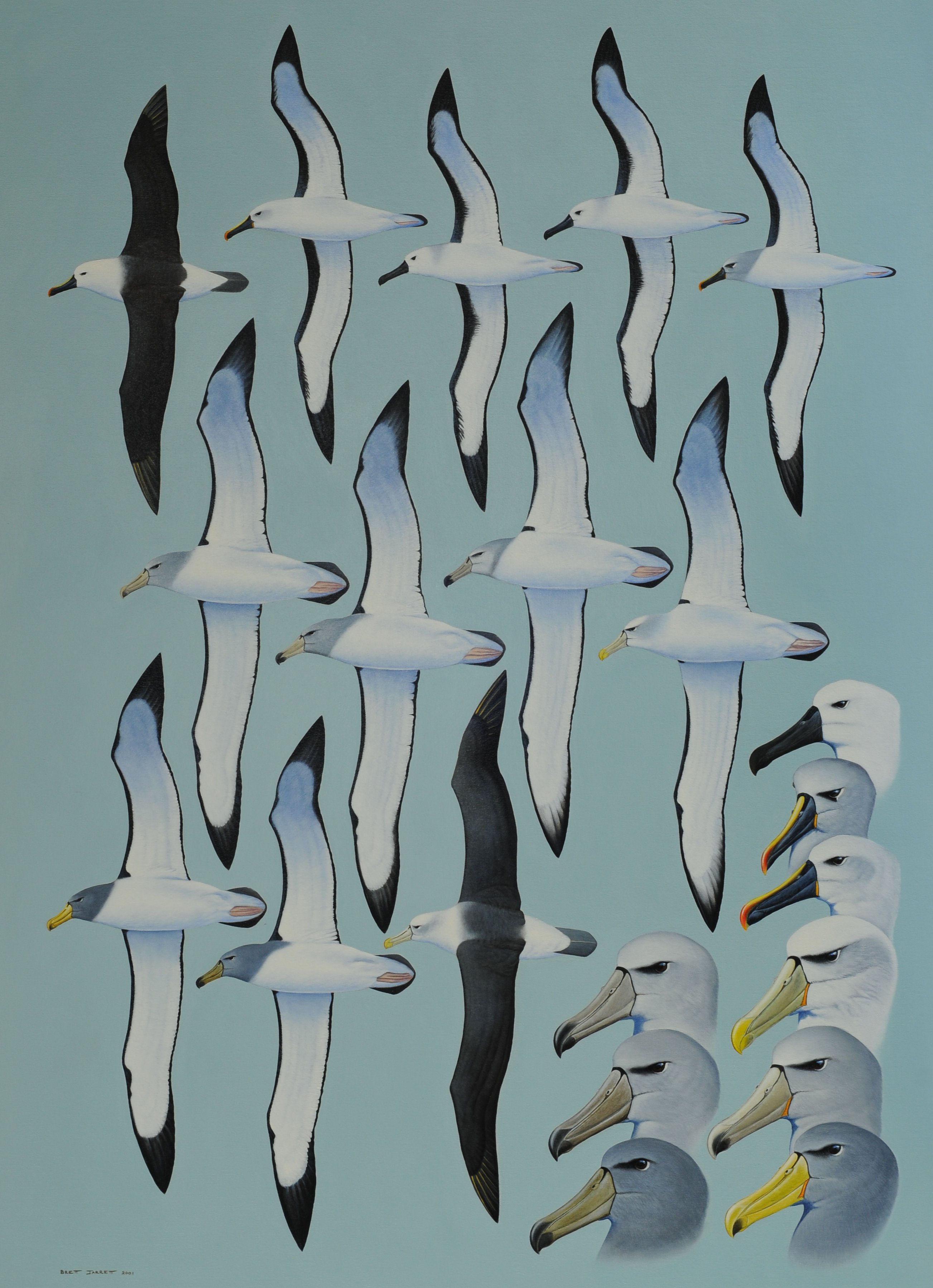 “Since childhood, observing the natural world and the everyday lives of animals and birds has forged a course forward that I'll never return from.  The emotion of being so immersed in nature and having developed a self-taught skill that records my ideas and imagination is in itself a chance to be a voice for nature.  There is something incredibly exciting about creating a piece of fine art that moves people.  As with all my artwork, it is born from the initial love of a subject that ultimately leads to a field trip, whether that be a day excursion or a full-blown month-long expedition.  My imagination often runs wild with all the possibilities of how these intended paintings will turn out.” 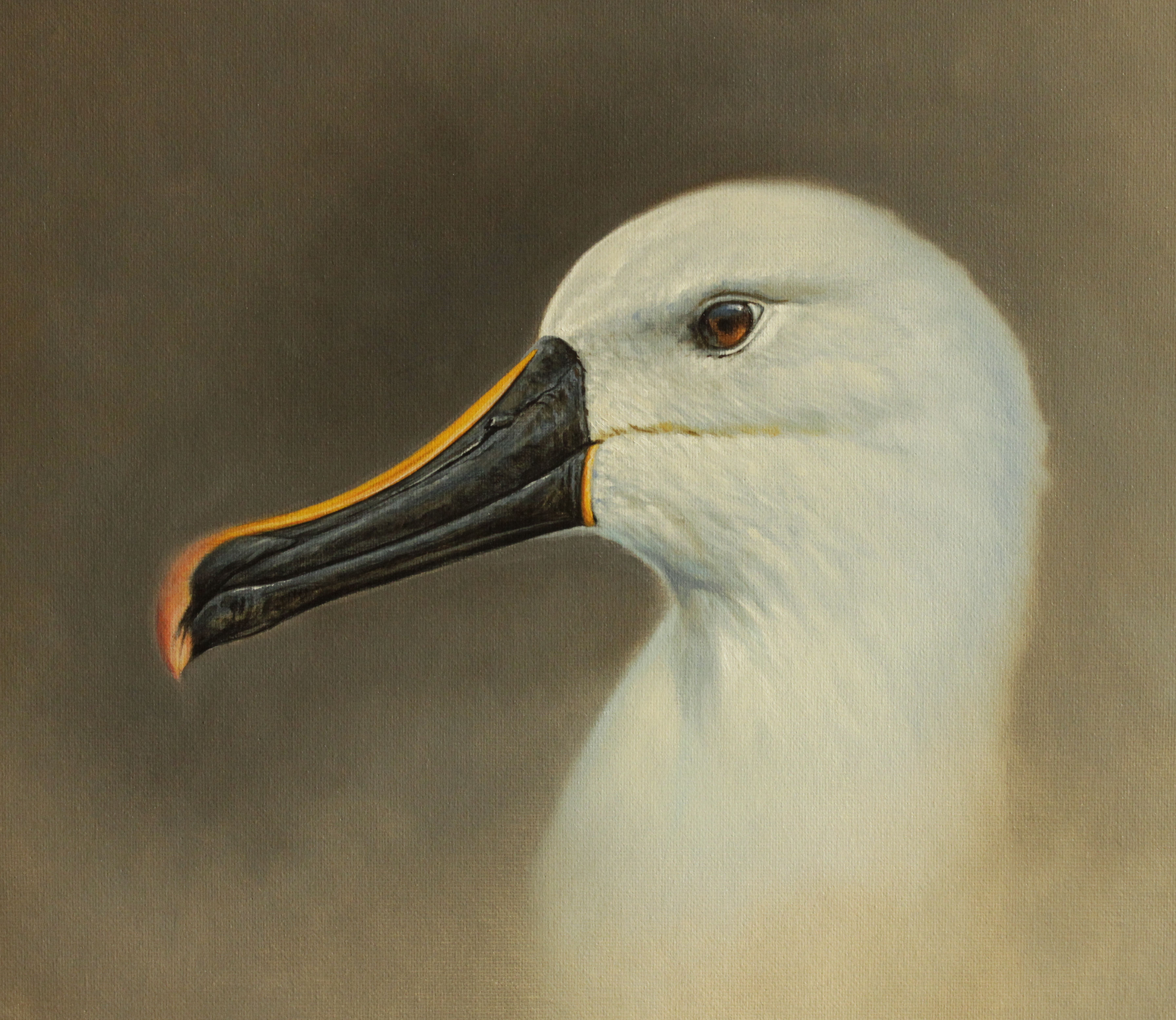 This year Brett has been producing ‘head and shoulders’ portraits of procellariiform tubenoses, such as the Indian Yellow-nosed Albatross illustrated here.  More portraits, including of several gadfly petrels can be viewed on his Facebook page.  His paintings of three Antarctic tubenoses (Antarctic Fulmar, Antarctic Petrel and Snow Petrel) in this series were done from his own photographs taken on visits to the continent. 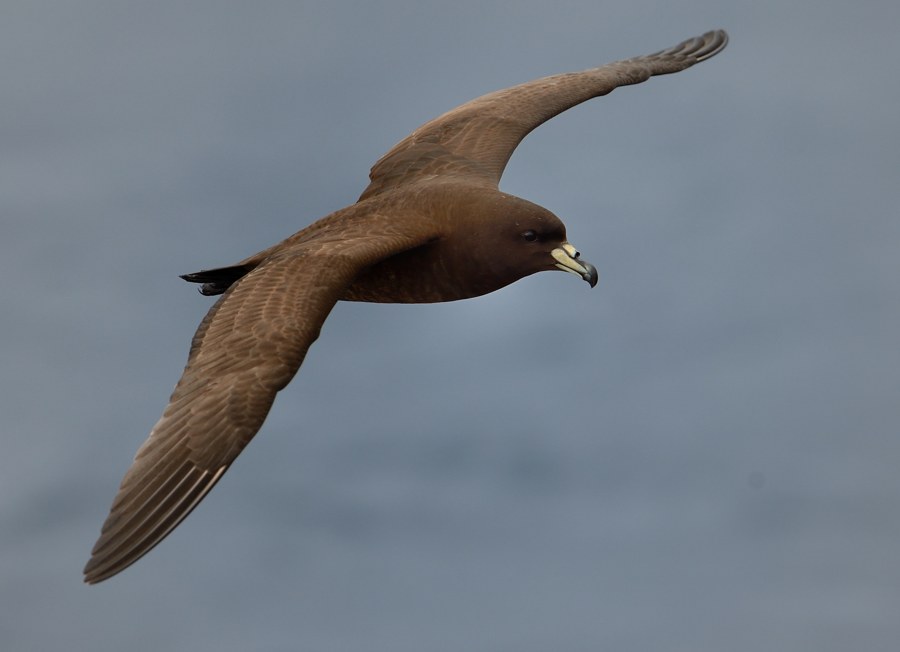 At risk to longliners: a Vulnerable Black Petrel Procellaria parkinsoni at sea in New Zealand waters, photograph by Kirk Zufelt

The Conservation Services Programme of New Zealand’s Department of Conservation monitors the impact of commercial fishing on protected species, studies species populations and looks at ways to mitigate bycatch.  For the last, it provides online information for fishers that sets out mitigation measures, as well as identification and handling guides for marine species, including threatened seabirds.  Four separate downloadable documents give information on mitigation measures for fishing vessel crew involved in longline, trawl, net and recreational fisheries.  They contain short videos describing the mitigation measures and their deployment, including bird-scaring lines, bafflers and hook shielding.  Light (at night) and discard management are also covered.

Individual identification guides (downloadable as PDFs) cover seabirds, marine mammals, fishes and reptiles, and corals.  The seabird guide covers 26 procellariiform species – 17 which are ACAP listed - that commonly occur in New Zealand territorial and EEZ waters, each with photographs and a summary text covering description, range, breeding, diet and threats.  The seabird guide is available in seven other languages commonly spoken by fishers from Europe and Asia.  The resource package is completed with a guide – in six languages - for fishers to access information on best-practice handling and treatment of seabirds and other animal groups that may come aboard fishing vessels.

With thanks to Igor Debski, Department of Conservation.