UPDATED. Next step achieved: progress with USA efforts to become a Party to the Albatross and Petrel Agreement

Dear Colleagues,
Earlier today, H.R. 1305, the Albatross and Petrel Conservation Act, cleared the U.S. House of Representatives Committee on Natural Resources. This legislation would implement the Agreement on the Conservation of Albatrosses and Petrels (ACAP) and its lead sponsor in the House is Representative Alan Lowenthal (D-CA). The bill was approved by the Committee on a party-line vote, 21-12. Although H.R. 1305 still needs to clear the full House and Senate, gaining approval by the House Committee on Natural Resources is the high-water mark to date in terms of action to advance ACAP. Stay tuned for opportunities to encourage action on ACAP in both the House and Senate.
~Stan Senner, Vice President, Bird Conservation, National Audubon Society.

On 26 March the Subcommittee on Water, Oceans, and Wildlife of the House Natural Resources Committee in the U.S. House of Representatives held a legislative hearing on Bill H.R. 1305 “To implement the Agreement on the Conservation of Albatrosses and Petrels, and for other purposes” with the short title “Albatross and Petrel Conservation Act.” The bipartisan bill was introduced by Representative Alan Lowenthal from California (click here and here).

Ed Melvin (Washington Sea Grant, University of Washington, Seattle, USA), and an expert member of the ACAP Seabird Bycatch Working Group since its inception in 2007, testified on the bill to the Subcommittee following his introduction (30:50 mark) by Rep. Pramila Jayapal from Washington State (click here to access his written statement and videoed spoken presentation and his response to questions by Rep. Ed Case from Hawaii at the 52:10 and 1:16: 40 marks, respectively). 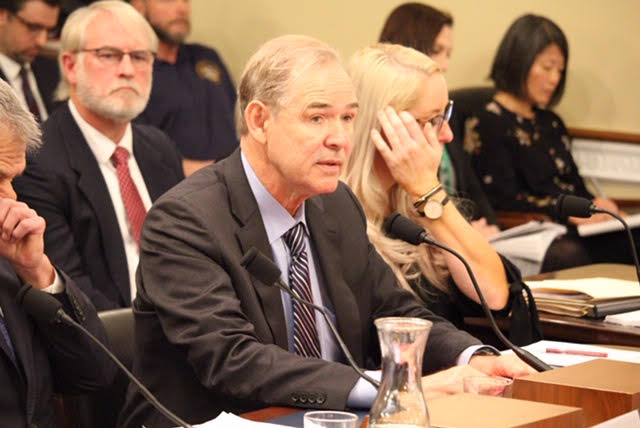 Ed Melvin gives his testimony to the Subcommittee on Water, Oceans, and Wildlife

In his written testimony Ed Melvin stated the following as to why the USA should implement the Agreement, encouraging the Subcommittee to support H.R. 1305 and to facilitate its passage in the House and the Senate:

“This bill would allow the US to formally join the international effort to maintain a favorable conservation status for albatrosses and petrels by joining the Agreement on the Conservation of Albatrosses and Petrels.

As the 14th nation to join the Agreement, the US would have a formal vehicle to use its formidable leadership position to extend the science based conservation measures already in place in US fisheries to the fisheries of other nations and to international tuna commissions that have jurisdiction over any part of the range of albatrosses and petrels that breed or forage in the US. As noted earlier, the US already participates in the ACAP process, but joining the Agreement would give the US a seat at the table for decision-making, research, and policy development and would allow US representatives and experts to hold positions of leadership in ACAP working groups, the Advisory Committee and the MoP. Being a party to the Agreement would allow us to more efficiently share our skills and experience to the benefit of these species and to the functioning of the Agreement itself.

No government bordering the North Pacific Ocean is Party to the Agreement at this time preventing the critical mass necessary to protect albatrosses and petrels worldwide. The US would thus be the first North Pacific nation to join the Agreement and could lead by example to encourage other North Pacific range states and governments to join the Agreement and the essential international effort to protect these vulnerable species. Canada, Japan, Chinese Taipei, The Peoples Republic of China, Russia, and South Korea all have large longline fleets that operate in the waters overlapping the foraging range of North Pacific Albatrosses. In most of these countries seabird conservation measures are lacking and/or not enforced nor are fishing operations monitored at sufficient levels to quantify the extent of seabird bycatch. Once the North Pacific albatrosses leave US waters, they have little to no protection from fishery mortality. We already collaborate with Japan (and Canada) on the recovery and protection of Short-tailed albatross through the ESA Recovery Team. Personally, I have worked closely with the Japanese tuna industry and the Japanese fishery management agencies on developing best practices to avoid seabird bycatch for their longline fisheries. I also have collaborated extensively with scientists in Chinese Taipei, Canada and Russia on seabird bycatch mitigation for their fisheries. My experiences and instincts tell me that these countries could follow the US into ACAP if the US were to lead. US status and leadership could also influence governments beyond the North Pacific to join the effort to protect these vulnerable species by joining the Agreement.

In addition, it is also likely that joining the Agreement would trigger further prioritization of seabird conservation work in our federal agencies. NOAA Fisheries could augment and institutionalize its capacity to lead mitigation research and fishermen training, and facilitate the participation of its scientists and managers in the ACAP process. The US, already a powerful voice in international fishing bodies (Regional Fishery Management Organizations), would be better positioned to advocate for worldwide adoption of fishery conservation measures based on the US experience and ACAP best practice advice. Further, joining the Agreement is likely to broaden the focus of conservation efforts in US fisheries from the endangered Short-tailed albatross to all North Pacific albatrosses and possibly the Pink-footed shearwater. As it is, protection for other seabirds, including Laysan and Black-footed albatrosses, is incidental to ESA based protections for Short-tailed Albatross. With regard to land threats, joining the Agreement is likely to elevate prioritization of the North Pacific albatrosses within the US Fish and Wildlife Service. This would result in provision of more consistent and reliable resources to monitor and assess albatross populations breeding on the Hawaiian Archipelago, better conservation plans to maintain habitat and eradicate predators on breeding colonies, and more reliable participation in the Agreement process.”

Black-footed and Laysan Albatrosses on Kure Atoll, photograph from the Kure Atoll Conservancy

Erik Schneider, Policy Analyst at the USA's National Audubon Society, which has been involved with encouraging the USA to ratify ACAP for some years (click here), writes to ACAP Latest News: "we were encouraged by the hearing on the bill in the U.S. House of Representatives, and we’re very thankful for Rep. Alan Lowenthal and Rep. Brian Fitzpatrick for leading the effort to pass the bill, and for the House Natural Resources Committee deciding to hold a hearing on the legislation.  We now hope that the Committee will next take a vote on the bill, often referred to as a “markup”, in which amendments are offered and the committee votes on whether or not to move the bill out of committee for a possible vote by the full chamber. We’re hopeful that the bill will pass the House. The legislation then needs to be introduced and moved through the Senate, and signed by the President. The Agreement separately needs to be ratified by the Senate, and at that point, the US can become a Party to the Agreement. Thus, we are in the early stages, but this is the first time the bill has had a hearing, so we are optimistic about the attention and energy behind it."

According to the NGO Pacific Seabird Group’s Facebook page “the Agreement on the Conservation of Albatrosses and Petrels legislation has long languished in Congress, but getting attention in this committee hearing is a step in the right direction”. Read an ALN posting on the USA’s  earlier efforts to become an ACAP Party.

With thanks to Mi Ae Kim, Ed Melvin and Erik Schneider for information and photograph.