Brian Douglas Bell QSM, FOSNZ, FRAO passed away peacefully on 1 October at his home in Marlborough on New Zealand’s South Island, surrounded by family and with views to his garden at the age of 86. 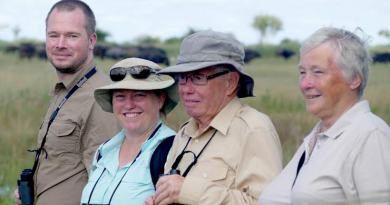 I first met Brian in Cambridge, UK at a Seabird Conservation Symposium arranged by the International Council for Bird Preservation (now BirdLife International) in August 1982.  At the symposium Brian, along with Chris Robertson, presented a paper on the conservation status of New Zealand’s seabirds, later published in the proceedings “Status and Conservation of the World’s Seabirds”.  I joined Brian along with other New Zealander attendees to listen to the New Zealand Youth Choir sing one evening in the chapel of King’s College, where we were staying.  Further meetings occurred with Brian at conservation and seabird conferences around the World and over the years.  Good memories indeed.

Throughout his career Brian was a pioneer and leader in species conservation, alien eradication and island restoration – at first in New Zealand with the Wildlife Branch of the Department of Internal Affairs (later the Wildlife Service) between 1957 and 1987, ending as Officer-in-Charge of the Protected Fauna Division directing endangered species recovery management programmes.  He was involved with bringing the Critically Endangered Chatham Island Black Robin Petroica traversi back from the edge of extinction, as well as helping pioneer the translocation of burrowing petrels and the eradication of rodents on New Zealand islands.  “Among the many island pest eradication programmes he was involved in were the removals of cats from Te Hauturu-o-Toi /Little Barrier Island, goats from Macauley Island in the Kermadecs, and weka and possums from Whenua Hou/Codfish Island” (click here).

In 1992 Brian established an ecological consultancy, Wildlife Management International Ltd (WML) and “took his decades of expertise and techniques in predator eradication, translocation and endangered native species and habitat restoration to the rest of the world” (click here).

Among his awards Brian received New Zealand’s Queen’s Service Medal in the 1984 Queen's Birthday Honours, awarded to recognise and reward volunteer service to the community and also public service in elected or appointed public office.  He was President of the Ornithological Society of New Zealand twice between 1972 and 1995.

WML is now ably run by his son, Mike Bell and daughter, Elizabeth ‘Biz’ Bell, continuing to rid islands around the World of their alien cats and rats, and working with threatened albatrosses and petrels, notably on the Chatham Islands translocating Chatham Albatross Diomedea eremita chicks and on Great Barrier Island with the Black Petrel Procellaria parkinsoni, both ACAP-listed species.  Through his family Brian’s life's work will continue as a living memorial.  What better way to be honoured and remembered?

Brian Bell is survived by his wife, Sue, his nine children and 14 grandchildren, to whom ACAP expresses its sympathies.