Jennifer Lavers (Institute for Marine and Antarctic Studies, University of Tasmania, Battery Point, Australia) and Alex Bond have published in the Marine Pollution Bulletin on correlations between ingested plastics and trace elements in two seabird species on Midway Atoll.

"Seabirds are declining faster than any other group of birds, with plastic ingestion and associated contaminants linked to negative impacts on marine wildlife, including >170 seabird species.  To provide quantitative data on the effects of plastic pollution, we sampled feathers and stomach contents from Laysan Albatross (Phoebastria immutabilis) and Bonin Petrel (Pterodroma hypoleuca) on Midway Atoll, North Pacific Ocean, and assessed our ability to detect change over time by synthesizing previous studies.  Between 25 and 100% of fledglings exceed international targets for plastic ingestion by seabirds.  High levels of ingested plastic were correlated with increased concentrations of chlorine, iron, lead, manganese, and rubidium in feathers.  The frequency of plastic ingestion by Laysan Albatross and concentration of some elements in both species is increasing, suggesting deterioration in the health of the marine environment.  Variability in the frequency of plastic ingestion by Laysan Albatross may limit their utility as an indicator species.” 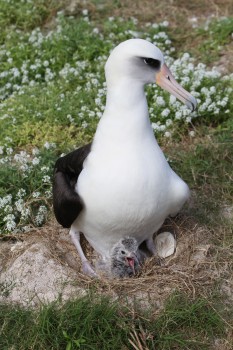