“Sub-Antarctic Marion Island is one of the few islands where both species of Phoebetria albatrosses breed sympatrically.  The last published assessment of their population trends, which reported counts up to 2008, concluded that the numbers of breeding pairs of sooty albatrossP. fusca (Endangered) were decreasing, whereas numbers of light-mantled albatrossP. palpebrata (Near Threatened) were increasing.  Extending the counts to 2014 reversed these trends, with numbers of sooty albatrosses increasing from 2006 to 2014, and numbers of light-mantled albatrosses decreasing from 2007 to 2014.  Confidence in island-wide counts is low due to the cryptic nature of the albatrosses on their largely inaccessible cliff-side nest sites, as well as counts for sooty albatrosses taking place late in the incubation period when 10−20% of nests have already failed.  Given the greater conservation concern for the sooty albatross, we recommend that dedicated annual counts be conducted during the early incubation period, and be repeated shortly after the chicks hatch (late December), mid-way through the nestling period (late February) and prior to fledging (late April), to give a better idea of breeding success.  Count zones also should be revised to facilitate more accurate counts, ensuring more reliable estimates of sooty albatross population trends at Marion Island.” 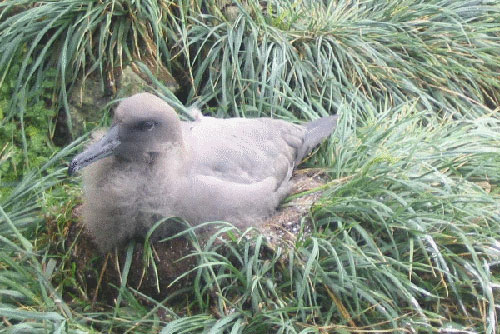 The paper will be discussed at the Third Meeting of ACAP's Population and Conservation Status Working Group, being held today and tomorrow in La Serena, Chile (click here).

With thanks to Rob Crawford and Susan Mvungi.