When I attended the British Birdwatching Fair in August 2000 at Rutland Water in the UK on behalf of BirdLife International's then "Save the Albatross Campaign" I was first in-line to have my copy of Lance Tickell's just-published book on albatrosses signed by him.  I still consult his book when researching news stories for ACAP Latest News on this web site, and I especially enjoy the final chapter entitled "The Mariner Syndrome" that eruditely reviews poetry about albatrosses since Coleridge's classic "Rime".  Sadly, this was to be our last meeting.

William Lancelot Noyes “Lance” Tickell was born in Coventry, United Kingdom on 21 October 1930, and passed away on 10 June this year.  The following text is largely taken from his biographical sketch, published in The Dictionary of Falklands Biography (Tatham 2008).

“After national service in the army, he attended Coventry Technical College and went on to the University College of North Wales at Bangor graduating in botany and zoology. In 1954 Lance joined the Falkland Islands Dependencies Survey (FIDS) as a meteorological assistant and was posted to Signy Island in the South Orkneys. ‘Metmen’ worked shifts which left plenty of time for field studies of the petrels that nested around the base hut. Always a keen climber, Lance made the first ascent of Mount Nivea (4,154 feet), the highest peak in the South Orkneys.

“On return to the United Kingdom wrote a report on the Dove (now Antarctic) Prion Pachyptila desolata at the Edward Grey Institute of Field Ornithology, Oxford under the supervision of Dr David Lack and was awarded an MSc (Wales).

“Encouraged by Nigel Bonner, but with minimal funds, Tickell and Peter Cordall (ex–FIDS) put together the South Georgia Biological Expedition 1958-1959, and sailed in the Christian Salvesen whaling tanker Southern Opal.  They went to Bird Island with Nigel Bonner, helped erect the small garden shed and assisted in tagging 1,700 fur seal pups.  They remained on the island for 15 weeks, setting up field studies of albatrosses and surveying the island.

Lance Tickell on Bird Island with mollymawk chicks in the 1960s, photographs by Ron Pinder

“Albatross research at Bird Island was concluded with an 18 month study of Wandering, Black–browed and Grey–headed albatrosses (1962–64) again funded by NSF (USARP) and supported by British Antarctic Survey (FIDS had been renamed BAS). Three new huts were built and Tickell with Ronald Pinder and entomologist Harry B Clagg wintered in the largest.

“While putting together that last expedition in London in 1962,  Tickell had married Willow Anne Phelps. When he came home in 1964 they went back to Baltimore and Johns Hopkins University where he wrote a dissertation on the great albatrosses for an ScD.  Other papers followed, culminating in 2000 when Albatrosses was published by Christopher Helm.

“In 1966 Tickell joined the (Scottish) Nature Conservancy as warden naturalist for Shetland and Orkney until 1969 when he went to East Africa as lecturer in zoology at Makerere University, Kampala. Other appointments followed in the University of Nairobi, Kenya, Chancellor College in the University of Malawi and the National University of Lesotho. Eventually he and his family returned home where he became a television producer in the BBC Natural History Unit at Bristol.”

Lance Tickell’s publications on albatrosses span an impressive 51 years from 1960 to 2011.  His first and last scientific papers were on the now ACAP-listed Wandering Albatross Diomedea exulans, as shown below.  His early research was ground breaking as he discovered that the species was a biennial breeder.  His last publication, in the Royal Naval Birdwatching Society’s annual journal Sea Swallow, gave a new explanation for the still-enigmatic pink staining that appears on the heads of adult Wanderers (click here). 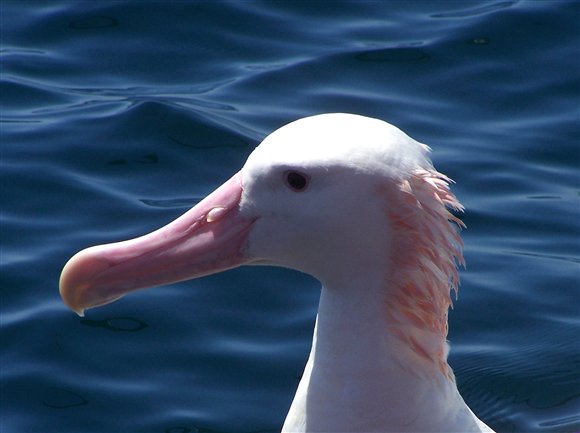 Lance was honoured in 2012 by having a mountain peak named after him on Bird Island (click here).  Tickell Peak is the second highest peak on the island at 290 m and, along with his albatross book, is a lasting memorial to a pioneer albatross researcher.

With grateful thanks to Bob Burton, John Croxall and Ron Pinder for information and photographs.