Featuring ACAP-listed species and their photographers: the Southern Royal Albatross by Peter Moore 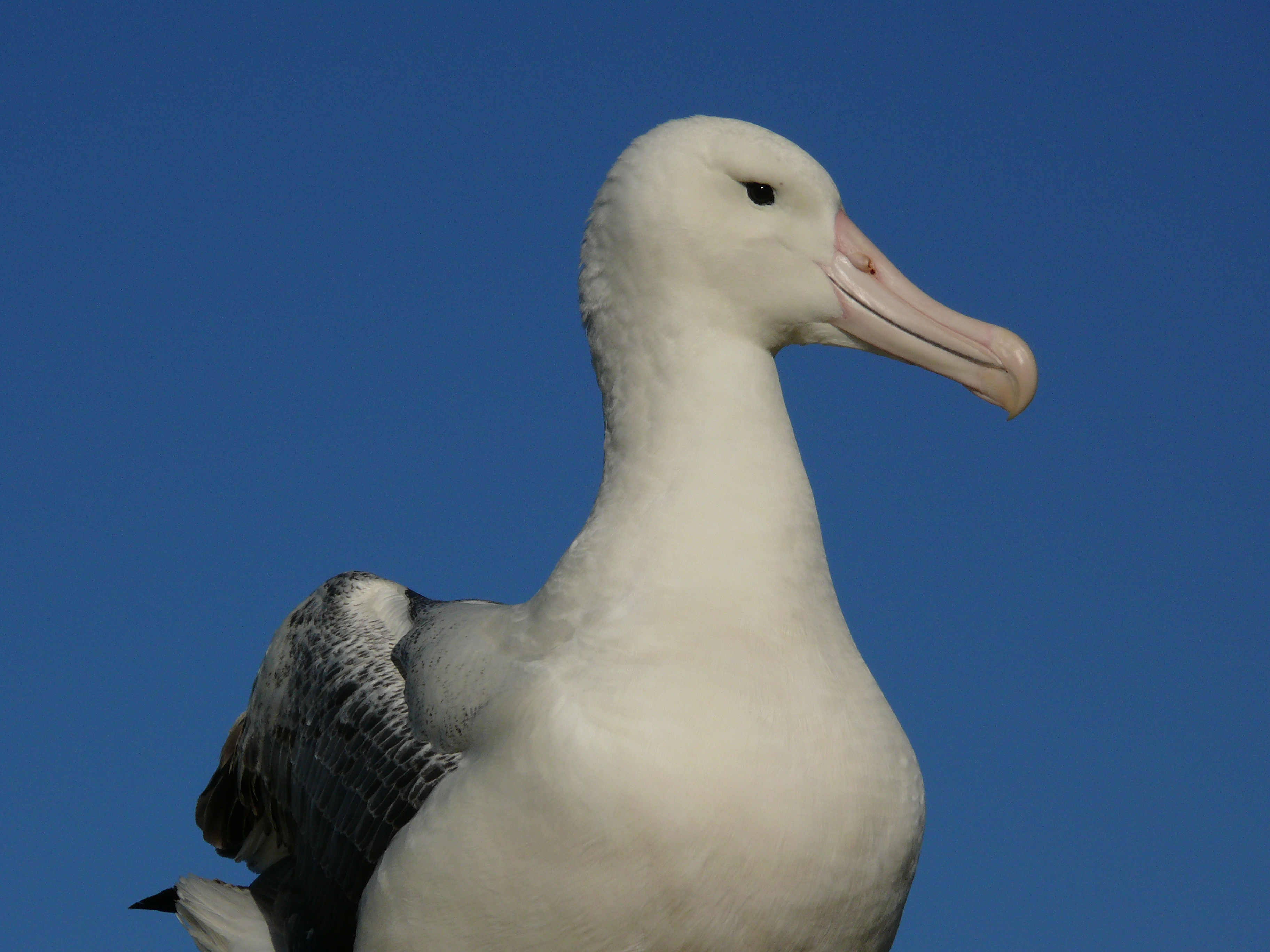 NOTE:  This post continues an occasional series that features photographs of the 31 ACAP-listed species, along with information from and about their photographers.  Here Peter Moore writes about his experiences with the globally Vulnerable and nationally Naturally Uncommon Southern Royal Albatross Diomedea epomophora.  Peter worked for many years as a seabird scientist for New Zealand’s Department of Conservation, most recently in its then Marine Conservation Unit.  He is now with the Institute for Applied Ecology in Oregon, USA.  See accounts for species so far covered in the series in the Photo Essays section on this website. 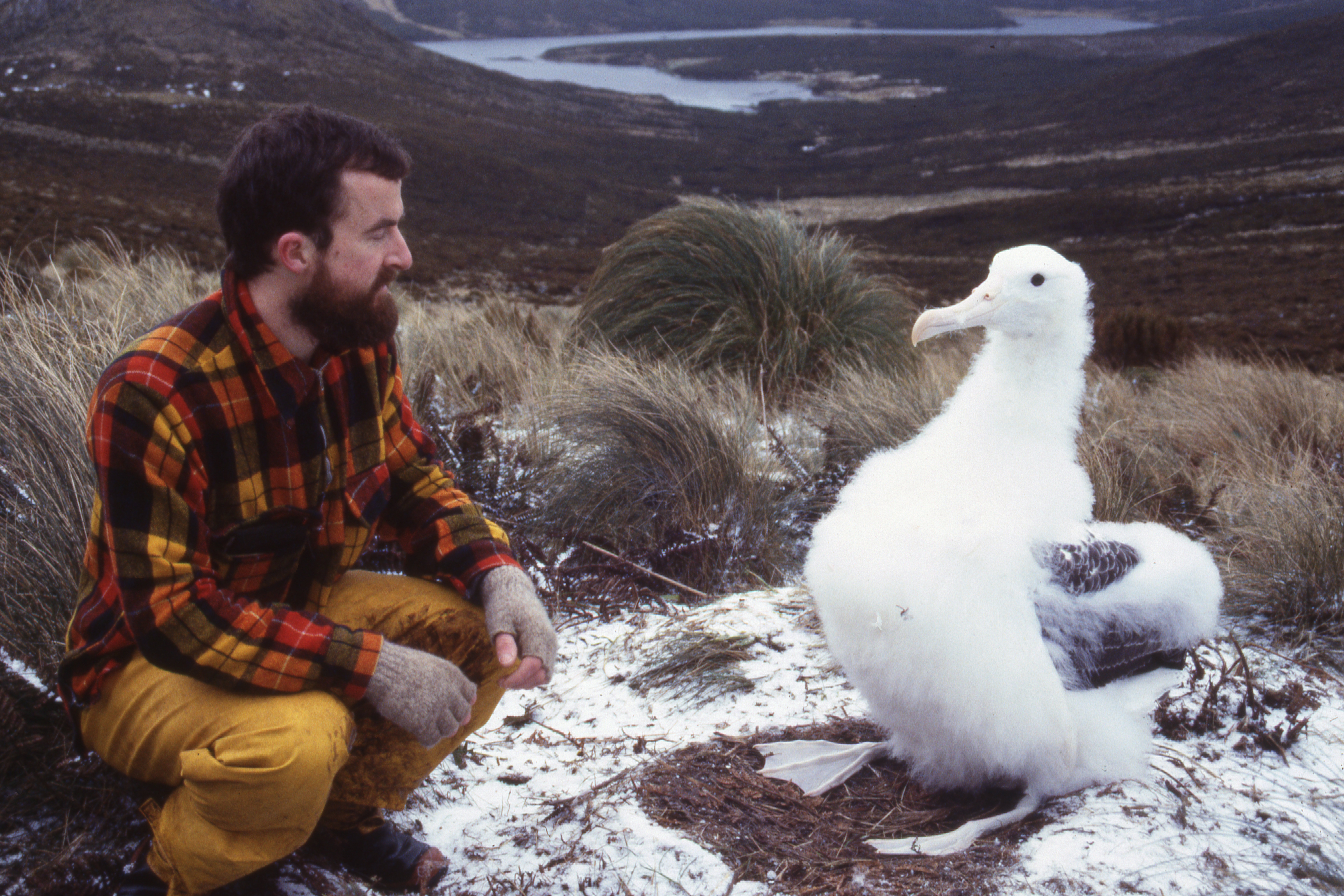 The Southern Royal Albatross breeds on sub-Antarctic islands south of New Zealand, principally on Campbell Island, where approximately 8500 pairs nest each year, and on the Auckland Islands, where there are fewer than 100 pairs.  The breeding pattern is biennial, and during their non-breeding years, adults and juveniles travel to South American waters.

Human activities have impacted the populations of Southern Royals.  Hunting of birds on Enderby Island, Auckland Islands during the mid-1800s resulted in the demise of the species there, although the bird has subsequently returned to breed.  It is possible that depredations and habitat destruction during the farming era (1895-1931) caused a large reduction in the population on Campbell Island, since there were only 2300 nests in 1957.  The species is also vulnerable to fisheries bycatch, for example a peak in tuna long-line fishing in New Zealand region during the 1970s to early 1980s coincided with a decrease in the population on Campbell Island.  Overall, however, Southern Royal Albatrosses increased in number during the 20th Century and apparently levelled off during the early 2000s. A recent low count of nests in the Col study area on Campbell Island warrants further investigation. 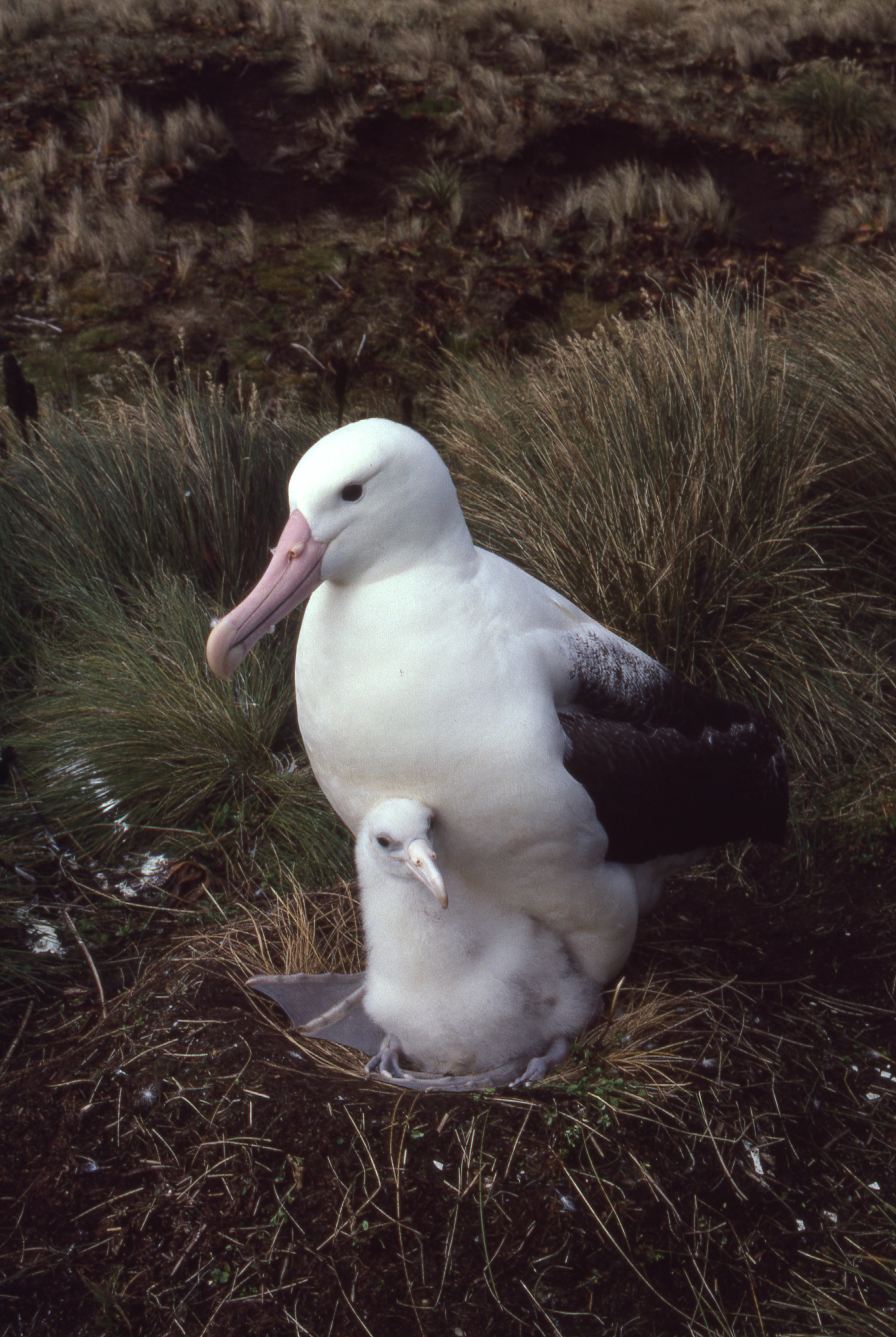 An approximately one-month-old chick being brooded by its parent, March 1988.  The egg is laid in November-December, chicks hatch in February and fledge in October

My first connection with Southern Royal Albatrosses came in 1987/88 when I spent a year on Campbell Island engaged in a wide range of Department of Conservation research and monitoring projects.  For one of our smaller tasks, Roger Moffat and I measured breeding success of Southern Royals in two study areas (Col and Moubray) by counting nests with eggs in January and hatchlings in March and then banding the fledglings in August.  It was always a treat to pass our regular “Albie” chicks and note their progress as we travelled along the ridgelines.  An enduring memory of that winter is seeing many albatross chicks sitting on their nests half buried during an unusually long period of snow accumulation. 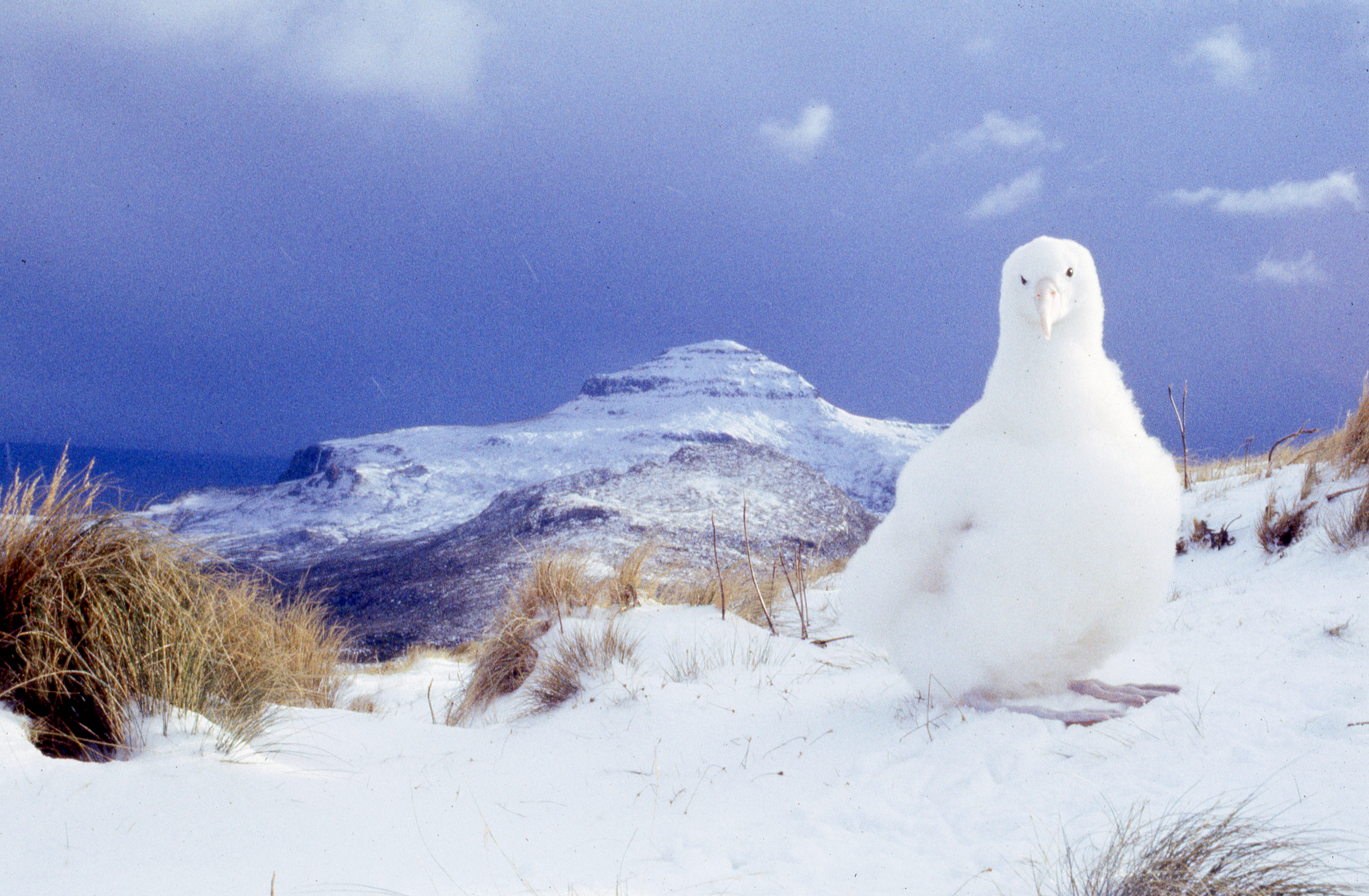 A downy post-guard chick in the snow with Mount Dumas in the background, May 1988

During several seasons in the 1990s, with the help of many colleagues and volunteers, I was able to continue monitoring and banding of Southern Royal Albatrosses at the study areas, add three new index count areas and conduct whole island censuses of nesting birds. 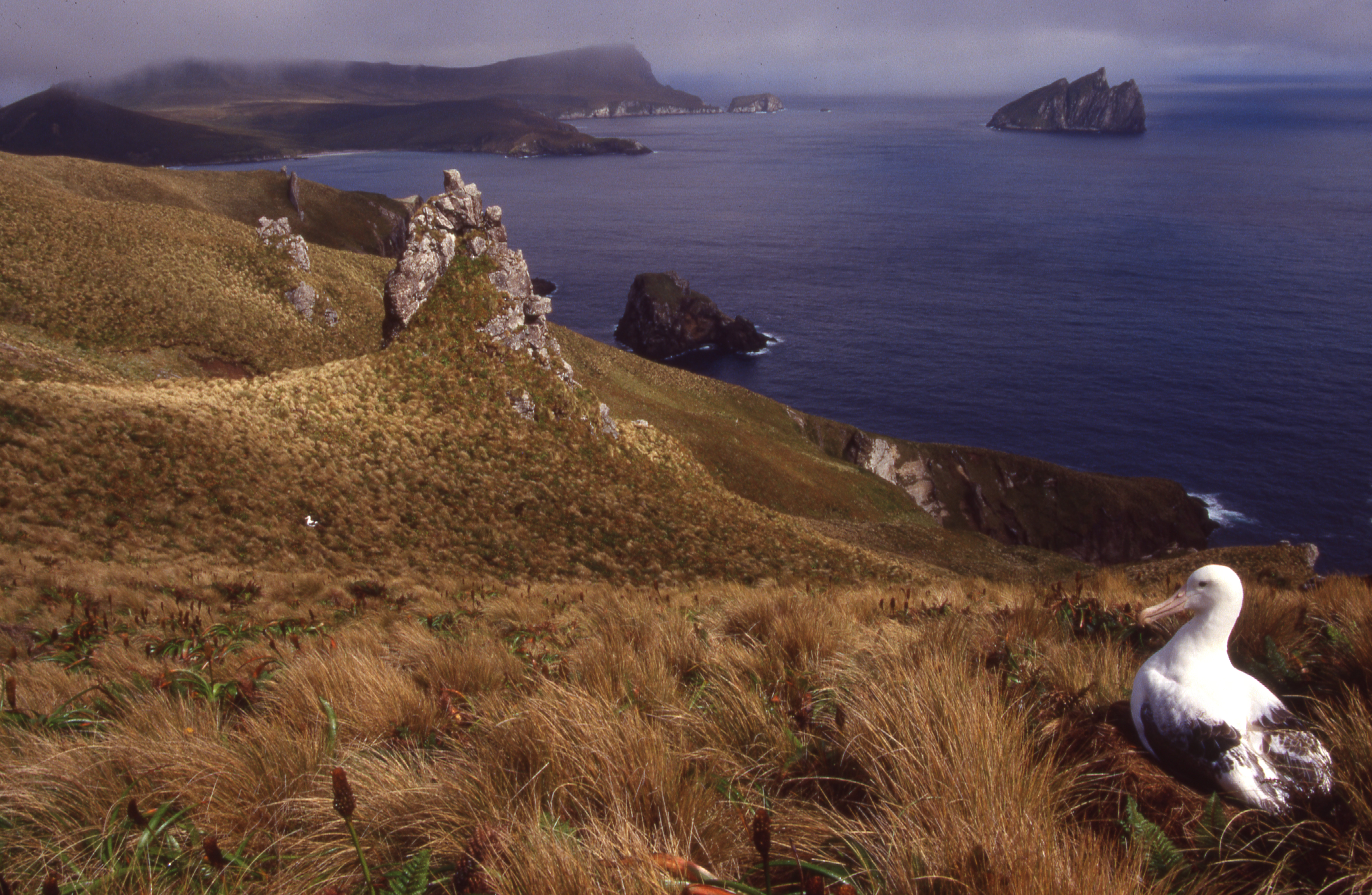 A nesting Southern Royal Albatross in the Col study area, with Northwest Bay and Dent Island in the background, February 1995

One thing we discovered was that it was less disturbing to apply and read bands to breeding birds while they sat on their nests than it was to remove them first.  Although this approach took care, it reduced the potential for eggs being damaged, abandoned or preyed upon by Brown or Subantarctic Skuas Catharacta antarctica.  On one occasion, when we did catch a bird for banding and measuring, the handler came off second best. Upon release, concerned that the bird was stumbling onto the nest, Gary leaned in a bit too close and the bird turned and tore a big slice out of his upper lip. Luckily, we had a well-stocked first aid room back at base.  Unluckily, one of the two people trained in suturing was the patient and the other person was not too proficient with a curved needle.  Fortunately, I was a good stand-in, but the lip is not easy to stitch up, and the operation took about two hours! 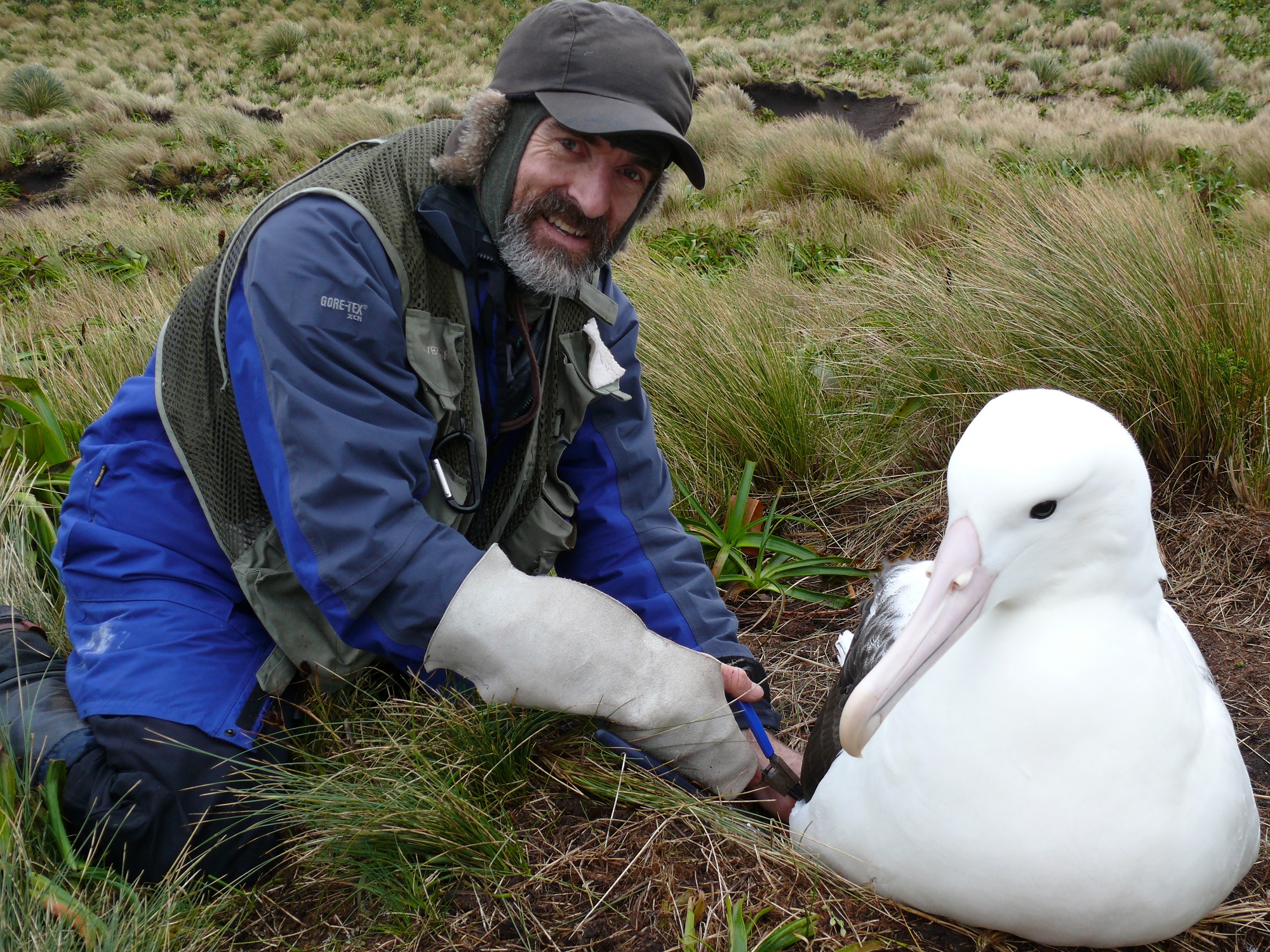 Peter Moore working with a banded Southern Royal Albatross on its nest on Campbell Island, January 2008

More than 35 000 Southern Royal Albatrosses were metal banded between the 1940s and 1990s, mainly by staff of the Campbell Island meteorological station.  In the days before satellite tags and GPS loggers, this resulted in valuable information on the circumpolar dispersal of adolescent birds and non-breeding adults.  Unfortunately, poor training resulted in some bands not being closed properly and even when they were applied well, the large springy band sometimes opened over time.  Open bands embedded in birds’ legs, and the resulting injuries crippled them.  Overall, we found that 3.4% of birds had been injured by their bands.  To rectify this problem, I returned to Campbell Island for five seasons from 2004/05 to 2008/09.  Two teams of four people scoured the hillsides looking for nesting birds to remove their bands.  As a bonus, we gained plenty of data on band recoveries; for example, the oldest bird that we found was aged 43 years.  We also gained detailed information about nesting distribution and population size.  To retain a marked population, we applied new stronger bands or inserted transponders on birds in the Col study area. 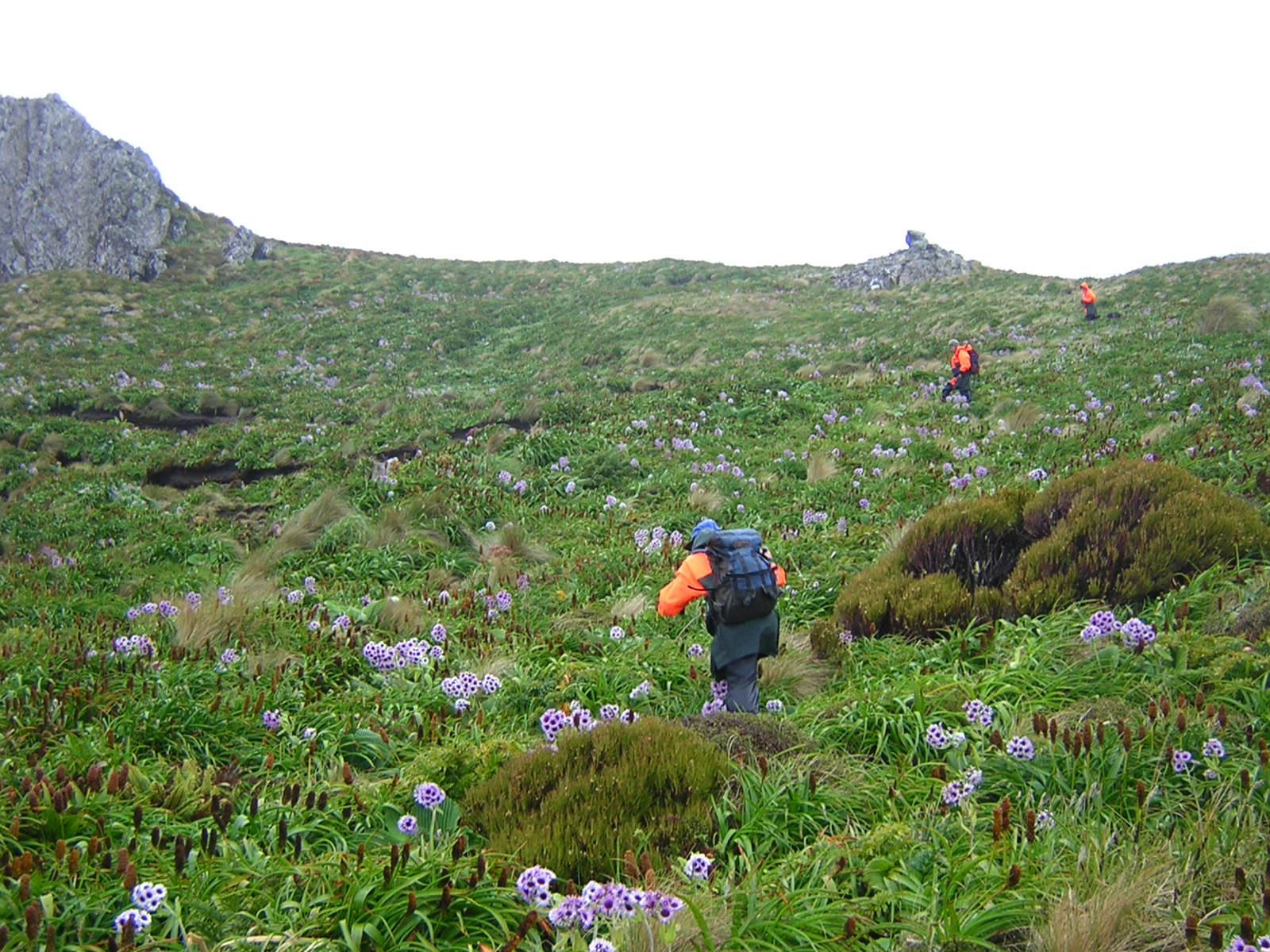 A team surveying for nesting birds in a megaherb field with the Campbell Island Daisy Pleurophyllum speciosum prominent, January 2007. For a large white bird, Southern Royal Albatrosses can be surprisingly well-hidden in the uneven terrain and tall vegetation

It was a great privilege spending so much time on Campbell Island over a 22-year period and it felt like a second home for me.  I shared these field trips with many other colleagues and friends, and one, Stacy, even became my wife - she returned for several albatross field trips.  There are too many anecdotes to go into detail, but they include three-day boat journeys - some which were pretty wild, laughing at the wind on ridge-tops, surveying “just one more hillside before dinner”, the antics and sounds of gamming albatrosses, games of Phase10 at the Moubray Hut, sharing songs, Norway Rats Rattus norvegicus burrowing into albatross nests before they were eradicated, tame Auckland Island Pipits Anthus novaeseelandiae aucklandicus coming into the huts after rat eradication, hosting National Geographic, the relative comforts of the DOC Annex (base camp), Campbell Island Olympics at New Year (featuring field-related events), and many more. 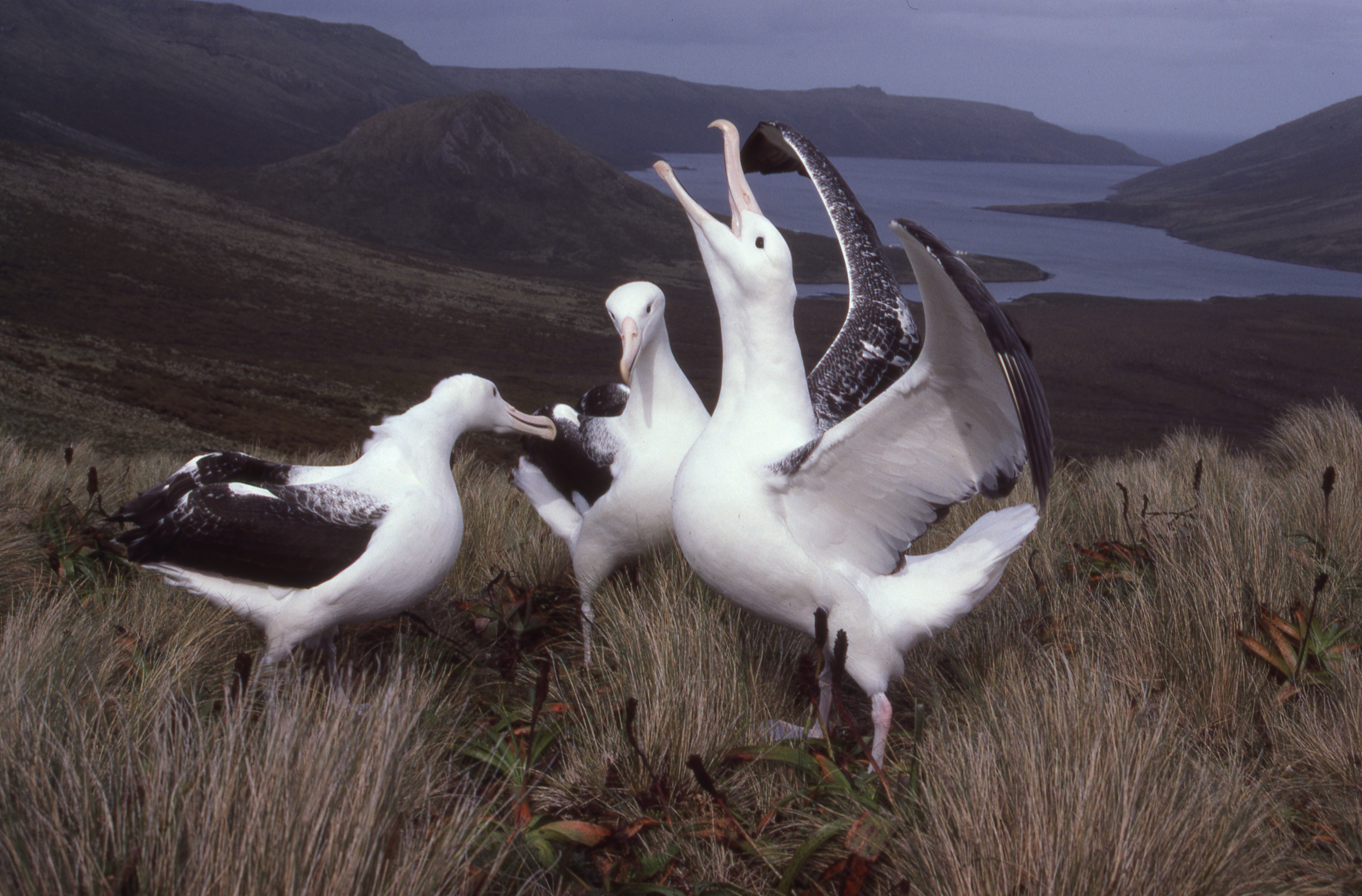 “Gamming” albatrosses provide a wonderful spectacle - young adolescent birds check each other out as they posture and call at these parties, which are always in a state of flux as birds come and go

The “royal” albatross seems well named to me - I have always been struck by its majesty.  It is hard to beat the feeling when a bird passes over your head on a ridge-top, effortlessly riding the wind, its wings outstretched.  Hopefully, we can continue to help the species rise above the challenges of a changing world. 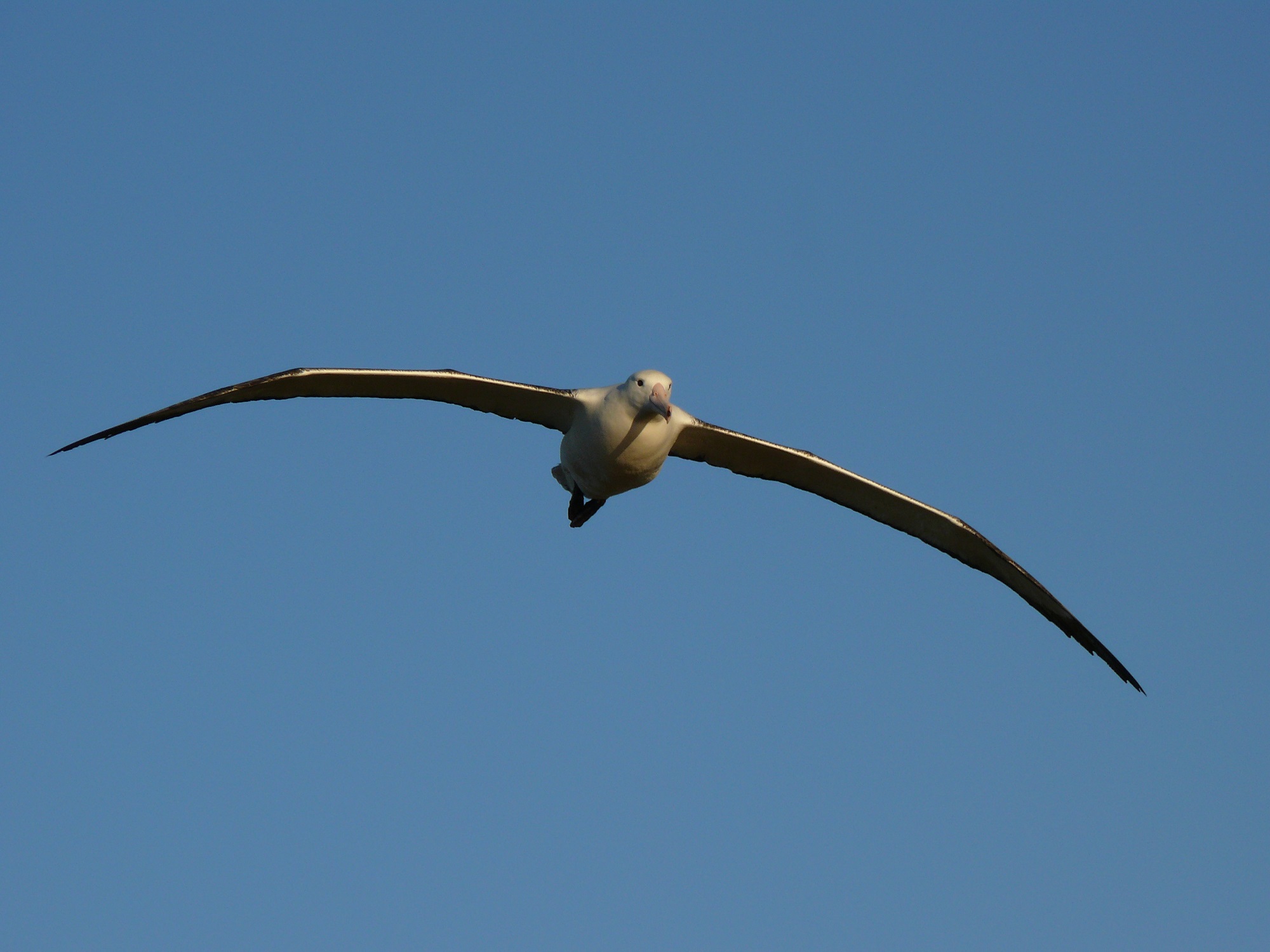 The Southern Royal Albatross on the wing is truly majestic; photographs by Peter Moore