Featuring ACAP-listed species and their photographers: the Indian Yellow-nosed Albatross by Karine Delord 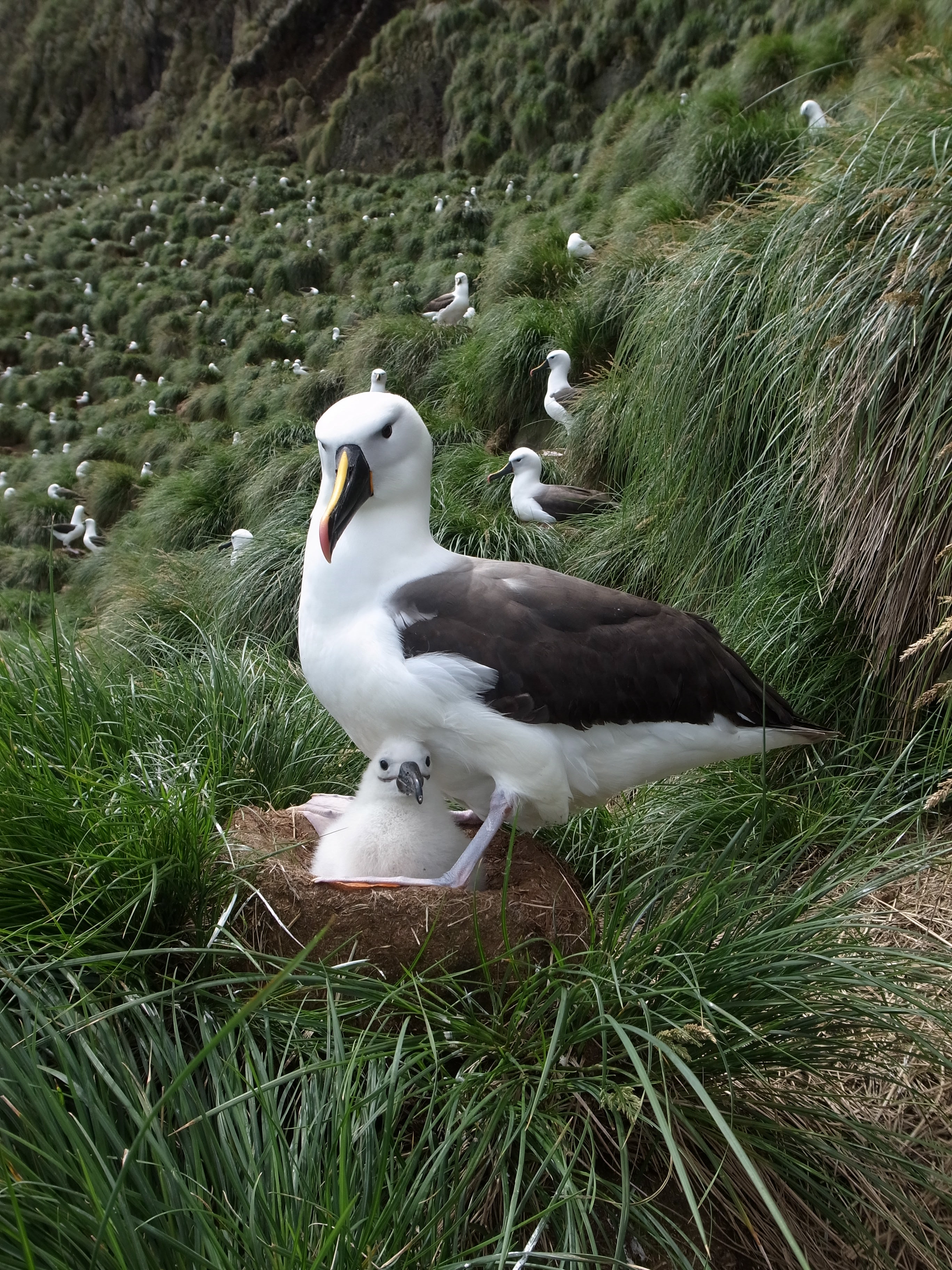 An Indian Yellow-nosed Albatross broods its chick on the tussock slopes of the Entrecasteaux cliffs, Amsterdam Island

NOTE:  This post continues an occasional series that features photographs of the 31 ACAP-listed species, along with information from and about their photographers.  Here, Karine Delord features the globally Endangered Indian Yellow-nosed Albatross Thalassarche carteri which she has studied on the French Southern Ocean island of Amsterdam. 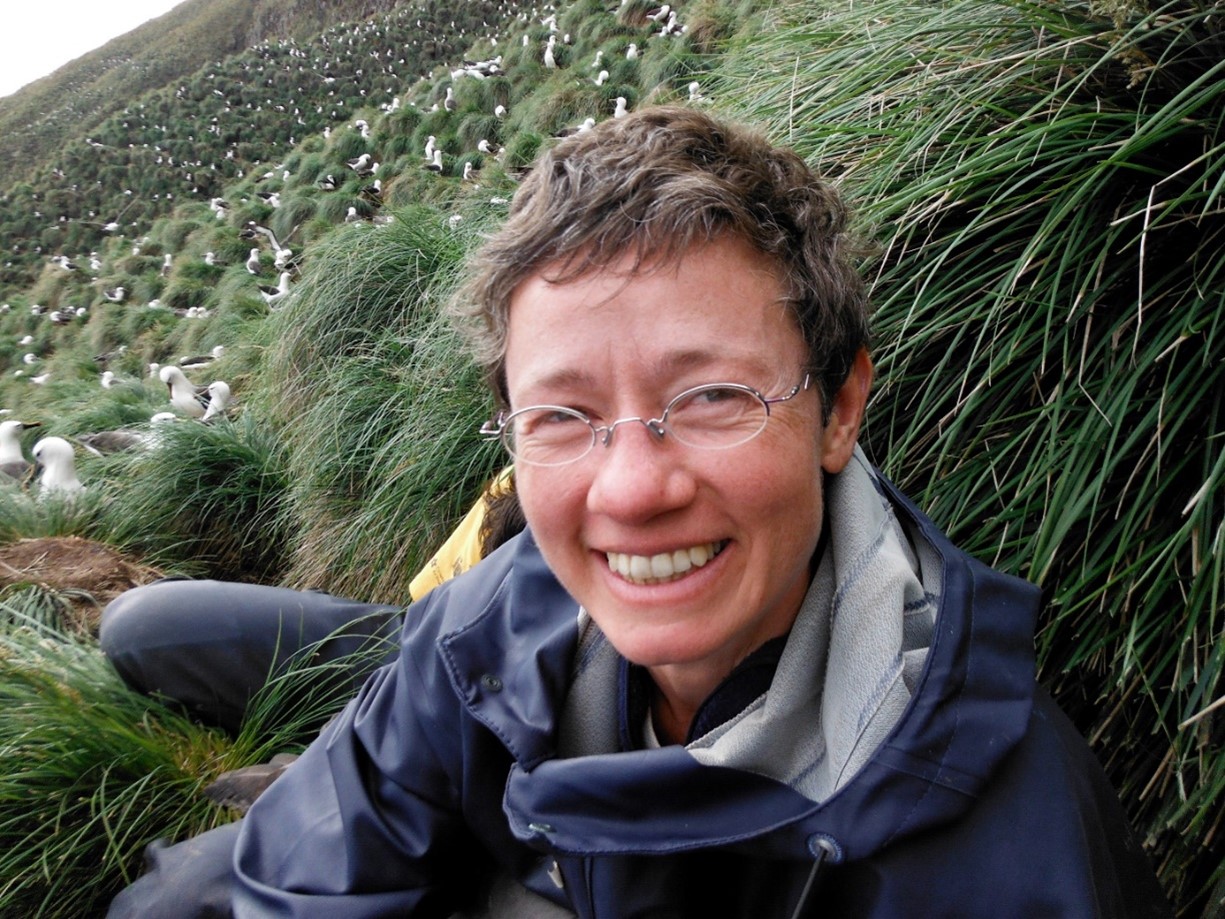 Being an ecologist and wanting to discover the French sub-Antarctic islands go hand in hand with becoming one of the links in a long-term observatory system.  The monitoring programme, initiated more than 60 years ago by the Centre d'Etudes Biologiques de Chizé (CEBC), a CNRS laboratory in France, allows for the study of the islands’ bird and marine mammal communities.  As a privileged witness to global changes and their impacts on the environment I particularly appreciate the maxim ‘it is never too late to start long-term monitoring and it is always too early to stop’.  However, I did not start my career on southern islands, but rather in the mountain ecosystems of the Pyrénées, far from seabirds.  From there I moved to the CEBC from where I was able to discover France’s southern territories and their species.

The CEBC monitors the populations of 25 species of Southern Ocean top predators (particularly albatrosses and petrels) through a network of four research stations ranging from Antarctica (Dumont d'Urville, Terre Adélie), the sub-Antarctic Crozet and Kerguelen Island Groups to the subtropical Amsterdam and Saint-Paul Islands.  Long-term individual information (in particular through the capture-mark-recapture method) is used to understand the processes by which climate variables affect species and to make predictive scenarios on population trajectories taking into account climate change. 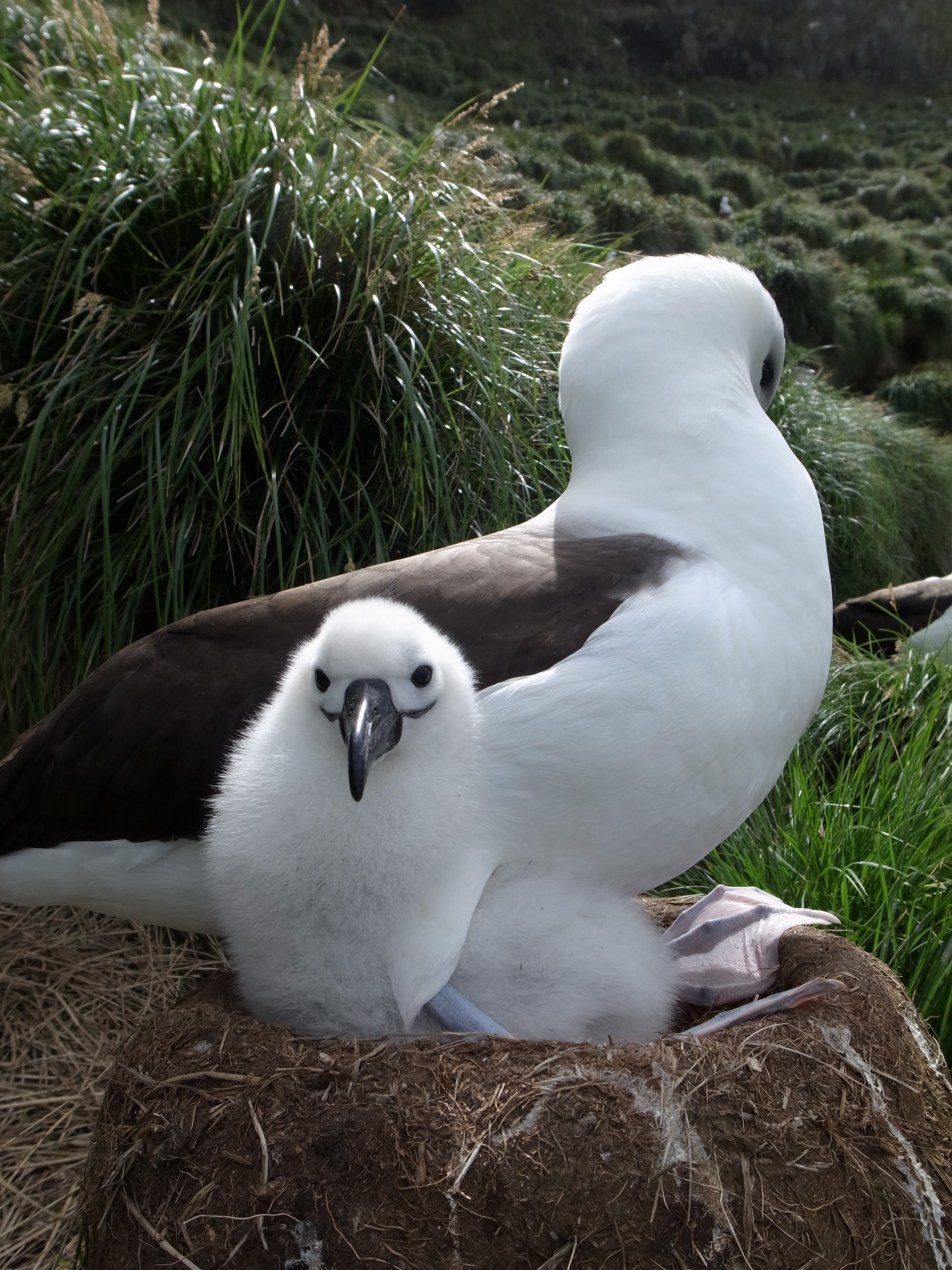 Getting too large to brood.  An inquisitive Indian Yellow-nosed Albatross chick looks at the photographer

Our long-term programme, supported by the French Polar Institut Paul Emile Victor (IPEV) and entitled “Birds and Marine Mammals as Sentinels of Global Change in the Southern Ocean” (Program: 109 ORNITHOECO) led by Christophe Barbraud, includes a conservation biology component and addresses, for example, issues related to the effects of fisheries on albatross and petrel populations.  This has led to collaborations with administrations and shipowners, enabling the implementation of effective conservation measures.  Every year we send volunteers to collect field data for our programme in the four districts (Crozet, Kerguelen, Amsterdam and Terre Adélie) for one year. 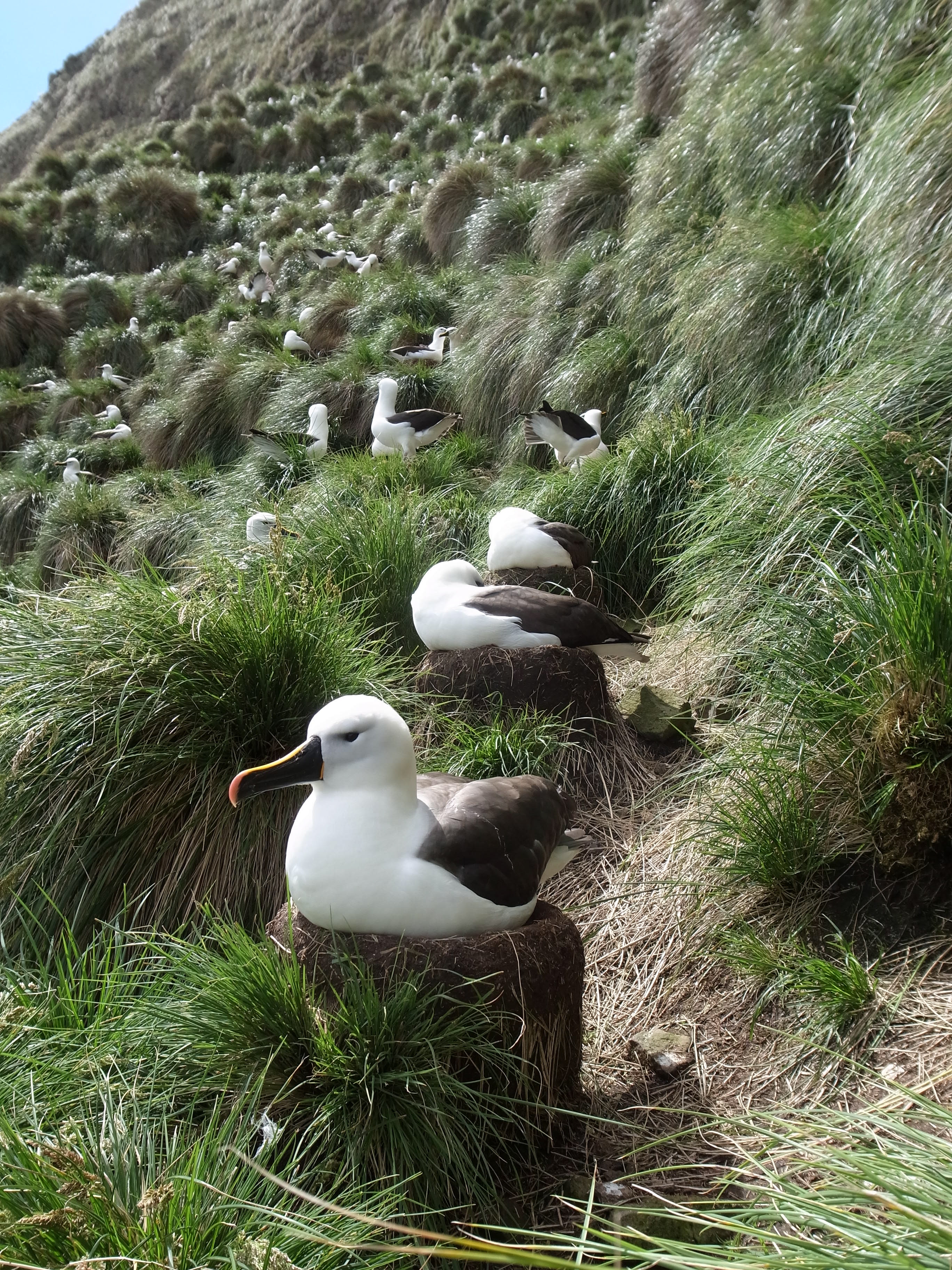 In 1998, I was able to join a scientific mission, jointly with a team of geologists from the University of Saint Etienne, which enabled me and my colleague Christophe Barbraud to carry out one of the few censuses of breeding petrel populations (Antarctic Fulmar Fulmarus glacialoides, Antarctic Petrel Thalassoica antarctica and Snow Petrel Pagodroma nivea) on the Antarctic coasts of King George V Land to the east of Terre Adélie.  The crossing between Tasmania and the Antarctic Continent on board the ship Astrolabe was for me an outstanding introduction to the Southern Ocean, where the exceptional diversity and density of seabirds (including albatrosses) seen remains a vivid memory.

Since the mid-2000s, I have been involved in studies of the accidental mortality of ACAP-listed Near Threatened Grey Procellaria cinerea and Vulnerable White-chinned P. aequinoctialis Petrels (both ACAP-listed species) linked to industrial fisheries (particularly by Patagonian Toothfish longliners).  These studies have led to major advances in the conservation of these two species in the French Southern Territories.

Subsequently, I have become involved in annual or ad hoc monitoring.  This was notably the case for issues related to pathogens, in collaboration with the Centre d'Etudes Fonctionnelle et Evolutive (CEFE, CNRS), at Montpellier, with the ECOPATH Programme (led by Thierry Boulinier) on the circulation of infectious agents in vertebrate populations.  I thus carried out a mission in 2013/14 on the Indian Yellow-nosed Albatross population that breeds on the cliffs of Entrecasteaux on Amsterdam Island.  This mission in collaboration with the TAAF National Nature Reserve aimed to identify and understand the modes of transmission of an infectious pathogen responsible for an epidemic, avian cholera, which kills a large proportion of the chicks each year and impacts the population.  The study also aimed to identify other top predator species that could be affected by the pathogen, such as the globally Endangered Amsterdam Albatross Diomedea amsterdamensis, a rare species endemic to the island.  This research is making progress on the knowledge of the infectious agent and its impact on the Indian yellow-nosed Albatross, although the Amsterdam population must also deal with other sources of threat. For example, this year was also marked by a major fire on the cliffs of Entrecasteaux which broke out in the middle of the breeding season (February 2021) and had devastating effects, affecting c. 95% of the surface area of the colony; as a result the reproductive success for this season is estimated at only 2%. 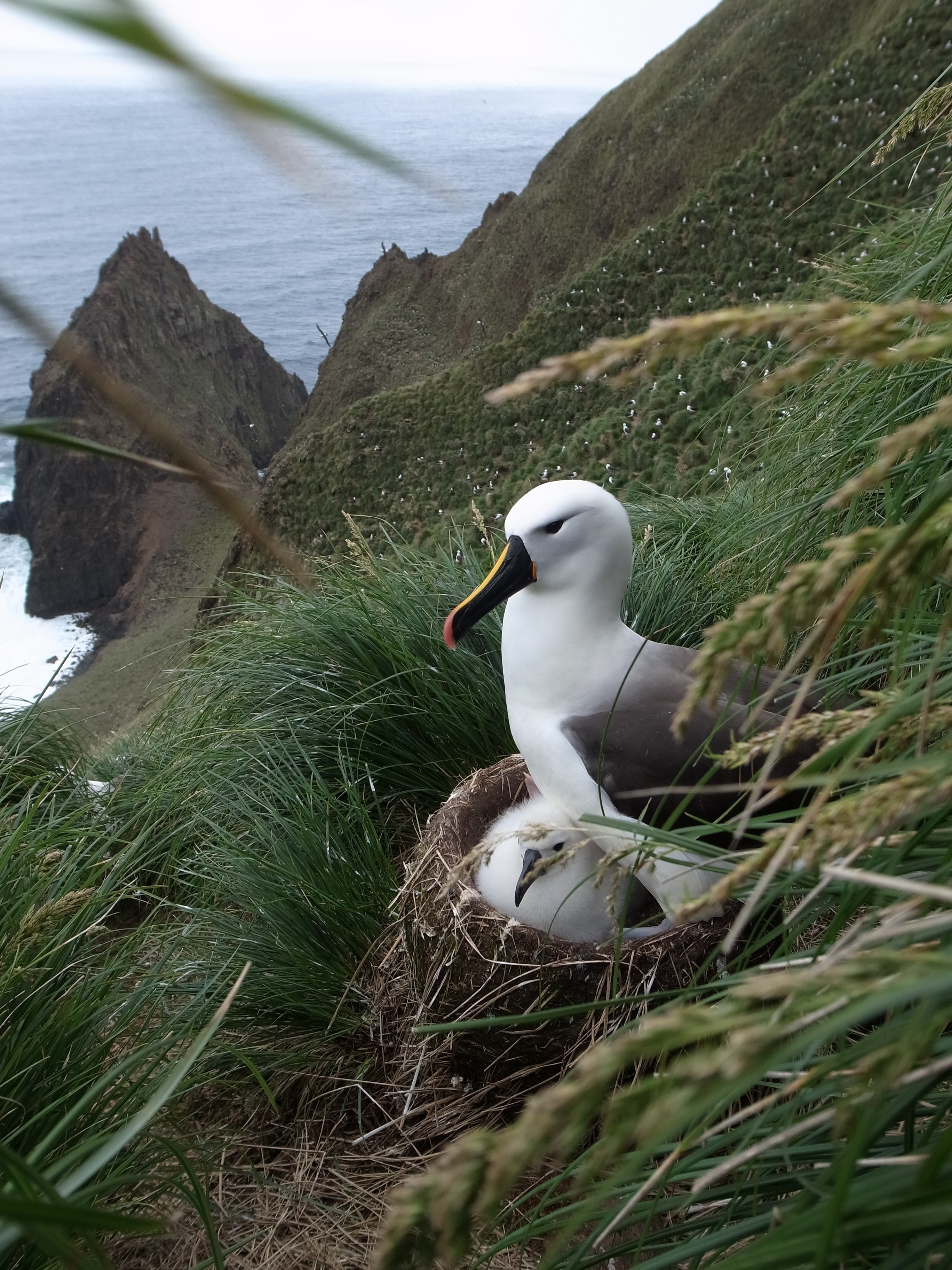 An Indian Yellow-nosed Albatross broods its chick at Entrecasteaux, with Cathedral Rock in the background

More recently, I carried out a multi-disciplinary mission with my colleagues Christophe Barbraud and Fabrice Le Bouard as well as agents of the TAAF National Nature Reserve on the island of Saint-Paul in 2018/2019 to estimate the seabird populations 20 years after the eradication of rats and rabbits.  The mission was an opportunity to observe the recolonisation of Saint-Paul by numerous species of seabirds, notably those known to be sensitive to predation by rats (MacGillivray’s Prion Pachyptila macgillivrayi, Fairy Prion P. turtur, Great-winged Petrel Pterodroma macroptera, Flesh-footed Shearwater Ardenna carnepeis, Subantarctic Shearwater Puffinus elegans, White-bellied Storm Petrel Fregetta grallaria and Antarctic Tern Sterna vittata) from their neighbouring refuge of La Roche Quille.  This also allowed us to update the population estimate of Flesh-footed Shearwaters breeding on Saint-Paul at the western limit of their range.  These very encouraging results for conservation argue for the eradication of the remaining introduced mammals (feral cats and rodents) on the neighbouring island of Amsterdam.