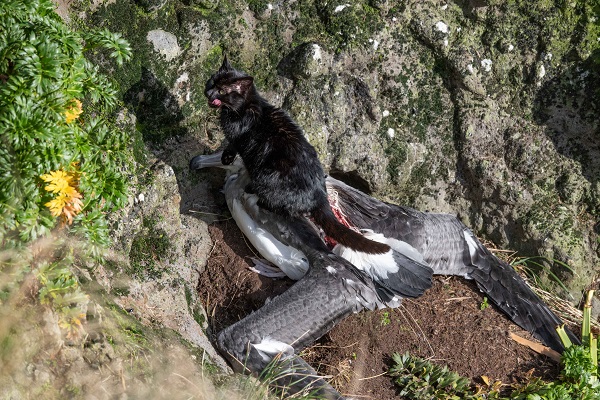 James Russell (School of Biological Sciences and Department of Statistics, University of Auckland, New Zealand) and colleagues have published in the journal Notornis on the impacts of introduced mammals on birds on the Auckland Islands, including ACAP-listed White-capped Albatrosses Thalassarche steadi and White-chinned Procellaria aequinoctialis.

“Since the European discovery of the Auckland Islands, at least ten species of land mammals have been introduced there.  Most arrived in the first half of the ninteenth [sic] century during periods of exploitation by sealers and whalers, followed by short-lived Māori and European settlements at Port Ross.  Several species required multiple introductions before becoming blished.  For those populations that naturalised, cattle (Bos taurus) occupied Enderby Island and were eradicated by 1993, goats (Capra aegagrus hircus) remained restricted to the northern end of Auckland Island and were eradicated by 1991, while pigs (Sus scrofa) spread across the entire Auckland Island and remain there today.  Rabbits (Oryctolagus cuniculus) established on Rose and Enderby Islands, and were eradicated in 1993.  Cats (Felis catus) and mice (Mus musculus domesticus) were both first recorded in 1840 on Auckland Island and remain there today.  Rats (Rattus spp.) have never established on the Auckland Islands.  Collectively, cattle, goats, sheep (Ovis aries), pigs, and rabbits transformed habitats and altered ecosystem processes, and suppressed tussock, megaherbs, and woody vegetation on Auckland, Enderby, Rose, Ewing, and Ocean Islands.  Cats and pigs are together responsible for the extirpation or major reduction of surface-nesting and burrowing seabird colonies, and ground-nesting land birds from Auckland Island.  Before dying out on Enderby Island, pigs had similar impacts there.  Mice have altered invertebrate community composition and are likely responsible for lower abundancies of wētā (Dendroplectron aucklandense) and large weevils (Curculionidae) on Auckland Island.  Disappointment Island remained free of introduced mammals, while on Adams Island they had only fleeting and minimal impact.  Humans also had direct impacts on birds through hunting for consumption, with large surface-nesting seabirds severely affected around Port Ross.  The Auckland Island merganser (Mergus australis) was driven to extinction by presumed mammal predation and well-documented museum collecting.  Eradication of pigs, cats, and mice from Auckland Island and Masked Island (Carnley Harbour) would remove the last introduced mammals from the New Zealand subantarctic region.”

This publication forms part of a compilation of 19 papers appearing in a special issue of the journal Notornis of Birds New Zealand that covers many aspects of the avifauna of the Auckland Islands.  The special issue is also being made available as a 436-page book with the title Lost Gold: Ornithology of the subantarctic Auckland Islands.  Edited by Colin Miskelly and Craig Symes, it can be ordered for purchase (click here).  An interview with the two editors gives information about their work with the book.  Click here to access abstracts for all 19 papers.

With thanks to Colin Miskelly, Museum of New Zealand Te Papa Tongarewa.