Banners to help raise awareness of this year’s inauguration of World Albatross Day on 19 June have been made and photographed by researchers on nine breeding islands so far, all in the southern hemisphere.  But albatrosses also breed north of the Equator, so ACAP Latest News is delighted to have received a contribution to the WAD2020 Banner Challenge from across the Equator.

Caren Loebel-Fried is already known to ACAP Latest News for her 2017 children’s book A Perfect Day for an Albatross, which is illustrated with her own artwork.  Caren has been volunteering on Midway Atoll in the North Pacific recently, helping with the annual count of incubating Black-footed and Laysan Albatrosses (and the solitary pair of Short-tailed Albatrosses) on behalf of the US Fish and Wildlife Service (USFWS).  The count can take a month or so - no small task with a combined population of well over a million birds frequenting the atoll!

Midway is perhaps not the easiest place to make a banner, but Caren at short notice was able to make a sign which she and her  fellow volunteer counters took to Eastern Island, the smaller, uninhabited (by humans) island within the atoll, for a day’s counting on 3 January.  The ensuing photos shows there is no compelling need to make a professional-looking banner to get across the message – especially when there is a team of enthusiastic albatross volunteers (led by Midway veterans Martha Brown, Jill McIntire and Breck Tyler) holding their tally counters aloft to fill the frame!  Caren writes that the gun on Eastern Island that appears in one of the photos here is of WWI vintage and was not part of the Battle of Midway that helped turn the tide in the Pacific during the Second World War. 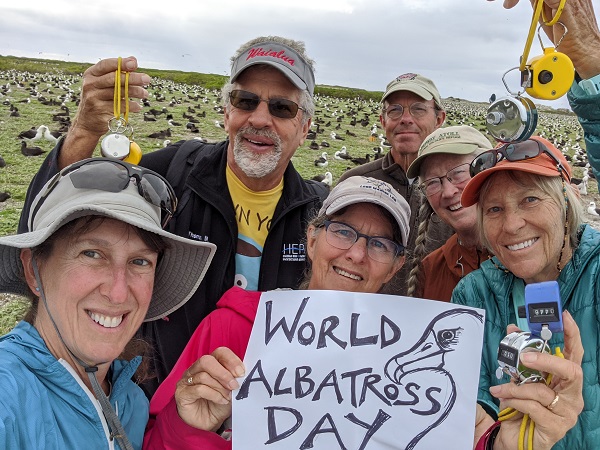 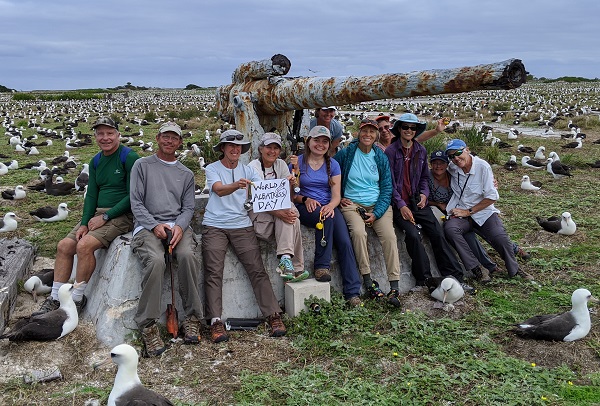 With thanks to Caren Loebel-Fried, who acknowledges help with information by Martha Brown and support received from the Friends of the Midway Atoll National Wildlife Refuge.  The annual albatross counts on Midway are supported by Steve Barclay, Tim Clark and Beth Flint (USFWS).  Other groups on Midway monitoring long-term study plots to track reproductive success and adult survival of albatrosses include Kupu members (Hawaiian Americorps) and six-month volunteers, Kelly Goodale, USFWS and Jon Plissner, Island Conservation.