Dominic Rollinson has this month been awarded his Doctorate by the University of Cape Town (UCT) for his study of seabird bycatch by pelagic longliners in the waters surrounding South Africa. 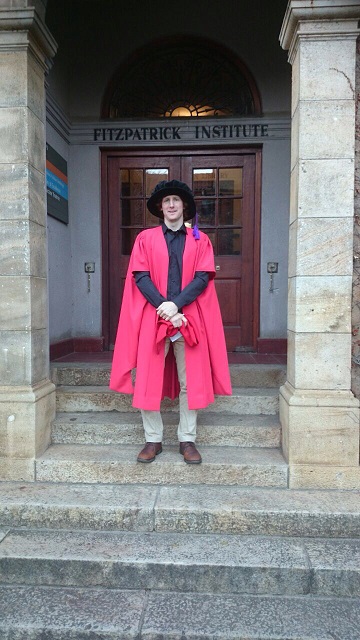 Graduation day: Dom Rollinson outside the entrance to the FitzPatrick Institute on the University of Cape Town campus

In Chapters 4 and 5 the foraging ecology of the most commonly recorded bycatch species off South Africa, the white-chinned petrel (Procellaria aequinoctialis), is investigated. An understanding of the foraging ecology of commonly recorded bycatch species enhances our understanding of seabird bycatch and helps to improve the design of current and future mitigation measures. The year-round movements of white-chinned petrels from Marion Island were investigated with Global Location Sensors (GLS loggers) and GPS loggers. Adult white-chinned petrels undertake only limited east-west movements of, with all birds remaining between southern Africa and Antarctica. These results strengthen the theory that there is limited spatial overlap year-round between white-chinned petrel populations from South Georgia, the southern Indian Ocean islands and New Zealand sub-Antarctic islands, suggesting that these populations can be managed as separate stocks. The diving behaviour of white-chinned and grey petrels (P. cinerea), another common bycatch species in Southern Ocean longline fleets, were examined with the use of temperature-depth recorders (TDRs), deployed on birds from Marion Island and Gough Island. My study was the first to analyse TDR dive data from any Procellaria petrel, and recorded them reaching maximum dive depths of 16 and 22 m, respectively. Current best practise suggests that baited hooks be protected to a depth of 5 m by bird-scaring lines, but my results suggest this depth should be increased to at least 10 m.

By incorporating studies investigating the factors affecting seabird bycatch, seabird foraging ecology and the efficacy of seabird bycatch mitigation measures, my thesis has broadened our understating of seabird bycatch from pelagic longliners and makes meaningful recommendations to further reduce bycatch, both locally and globally. Although seabird bycatch rates have declined off South Africa, through the use of a number [of] different mitigation measures, they still remain higher than the South African national target and thus more work is needed to achieve this target. To reduce seabird bycatch from pelagic longliners to acceptable levels, studies from the world’s various longline fleets needs to be considered and improved upon, with seabird conservationists and fishermen working together to achieve this goal.”

Click here to access a recent publication on seabird bycatch by Dom and his colleagues. His other papers can be accessed from here.

With thanks to Dominic Rollinson.