ACAP Breeding Site No. 74. Wake Atoll, at the edge of the breeding range of North Pacific albatrosses

Wake Atoll (739 ha) is made up of three low coral islands: Wake Wilkes and Peale, lying around a central lagoon.  Wake and Wilkes are connected by a causeway.  The atoll is situated within Micronesia in the Northern Pacific Ocean a little north of the Marshall Islands and is an unorganized, unincorporated territory of the USA. 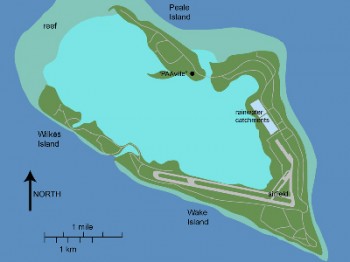 Although Wake Atoll is managed by the USA’s Department of Defense it falls within the Pacific Remote Islands Marine National Monument that was declared in 2009. From this year an expanded monument includes the 200-nautical mile Exclusive Economic Zones (EEZ) around the atoll within which commercial fishing is not allowed (click here).  Wake is the only inhabited island in the atoll and has an airfield.

Wake Atoll lies towards the edge of the current breeding range of the Laysan Albatross Phoebastria immutabilis.  A few pairs of Laysans have attempted breeding on the atoll in recent years.  The first definite breeding record was in 1996 following sightings in the 1980s.  A chick fledged in 2001 and there were three failed attempts in 2008.  Another chick, the last recorded, successfully fledged in 2009.  A Laysan Albatross laid an egg in November 2013 below an introduced Ironwood Casuarina equifolia tree that was incubated for two weeks before failing.  A second egg found in 2013 was also abandoned.

Black-footed Albatrosses P. nigripes visit Wake in small numbers.  Successful breeding has not been reported although eggs have been recorded occasionally since 1996 and up to at least 2003 when three pairs attempted breeding.

Feral Domestic Cats Felis catus originally brought to the atoll as pets killed many birds (estimated as 30 000 a year) in the past on Wake but have now been successfully eradicated from all three islands.   A shooting and trapping campaign in the first decade of the century removed 170 animals.  An eradication attempt in 2012 was successful in removing the Asian Ship Rat Rattus tanezumi but not the Pacific Rat R. exulans, although uninhabited Peale Island remains rat free.  Wilkes Island is operated as a Bird Sanctuary and is closed to visits without permission from island managers.  It supports most of the atoll’s breeding seabirds, including Wedge-tailed Shearwaters Puffinus pacificus, now increasing in numbers after the eradication of cats.

With thanks to Mike Rauzon for information.