Does monitoring of Grey-headed Albatrosses affect their breeding? A study conducted at Marion Island

“Nest monitoring is commonly used to gather important seabird demographic data, but monitoring itself can affect seabird behaviour and offspring survival.  The effect of monitoring on grey-headed albatrosses Thalassarche chrysostoma at Subantarctic Marion Island was investigated.  The behaviour of chicks close to fledging and of brooding adults was recorded in research and non-research sections of the colony.  This was done prior to, during and after researcher/s entered the research sections of the colony.  During disturbance, both chicks and adults in research sections were more likely to be standing and to be more responsive than during the pre-disturbance phase.  However, adults appeared to be more sensitised to disturbance and this is likely because of being previously handled.  Offspring survival in research sections was compared with survival in (a) sections less-frequently entered (2004/2005) and (b) sections monitored through fixed-point photography (2005/2006 and 2006/2007).  In February of each of the three years of study, offspring survival was 62.5%, 55.8% and 71.8% respectively.  Disturbance level, size of section and the interaction of these two factors did not explain significant amounts of the among-section survival variance, but rainfall explained almost all of the temporal variation in offspring survival in 2006/2007.  Although research activities influenced the short-term behavioural responses of chicks and adults in the research sections of the colony, it did not seem to influence the survival of offspring.  Nevertheless, fixed-point photography is recommended as a non-intrusive monitoring method.” 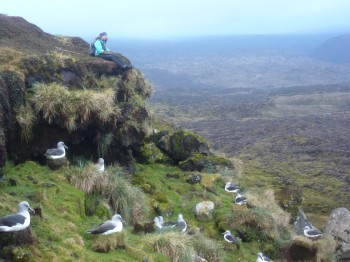