ACAP Latest News has been reporting on the innovative efforts by Pacific Rim Conservation to establish a new breeding colony of Laysan Albatrosses Phoebastria immutabilis by artificially hatching eggs and then hand-rearing the chicks (click here).

The project aims to create a new breeding site on the Hawaiian island of Oahu, where the birds will not have to face the deleterious effects of sea-level rise that are predicted for the species’ main breeding sites on the low-lying atolls of the North Western Hawaiian Island chain.  Here are the latest updates of progress with rearing the chicks, courtesy of Pacific Rim Conservation.

“The translocation release site for the albatross chicks was outfitted with decoys and a speaker system playing albatross calls to not only attract adult birds, but so that the chicks know what an albatross looks and sounds like.  Amazingly, we've already had some adults checking out the site- this bird spent over an hour on the ground yesterday.  His leg banded indicated he is from Tern Island in the North Western Hawaiian Islands.  A great example of social attraction working it's magic.”

Decoys on the left; Tern Island visitor on the right next to a speaker

“Today was another important milestone in the Laysan Albatross translocation project- we moved the chicks outside, from the garage to the fenced area.  Below is a photo from today showing 6 of the 9 chicks inside the small A-frame houses that we built for them to provide shade and prevent (we hope) overheating.  And yes, in addition to the decoys in the background there are 2 adult albatross visitors.  One of them landed about 10 minutes after we put the first chicks outside.  They never really approached the chicks, and we can’t be sure they actually saw them, but it is an encouraging sign.  The chicks began building their own nest cups almost right away by picking grass stems with their beak and scraping with their feet. The move outside will be good for them in many ways- sunlight, more exercise, natural substrate, and exposure to real adult albatross.  We have cat and mongoose traps just outside the fence.  We caught quite a few mongoose around the abandoned house, but none near the fence.  The chicks are getting 15-20% of their body weight in food each day, and are showing consistently good weights gains.  The oldest chick is 43 days old and the heaviest chick now weighs 2600 grams.  We expect their weight to begin leveling off at about 3000-3500 g, after which their feather growth should accelerate.” 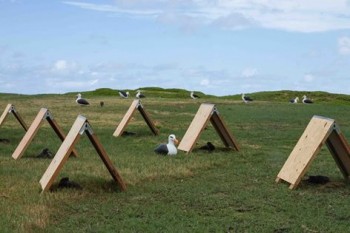 “We had two adults hanging out and literally snuggling with the chicks today which is awesome- they are being visited daily by wild adults which is very exciting.”

With thanks to Lindsay Young, Pacific Rim Conservation for text and photographs.