Although, as has been previously reported in ACAP Latest News, MIPEP resulted in not inconsiderable non-target mortality of birds from both primary and secondary poisoning, notably of ACAP-listed Northern Giant Petrels Macronectes halli, the evaluation report considers that their numbers are likely to recover within a few decades.  On the plus side the island’s breeding population of ACAP-listed Grey Petrels Procellaria cinerea continues to increase in the absence of introduced mammals. 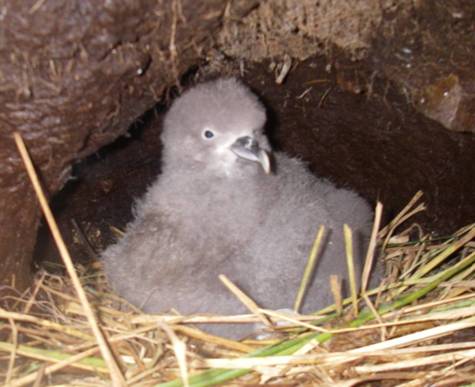 A Grey Petrel chick in its burrow on Macquarie Island

In concluding the evaluation report calls for continued monitoring of recovery of Macquarie’s landscape (affected by peat slips), vegetation and seabirds and for improved protection via a new biosecurity plan.

“Overall, the project has come in one year ahead of schedule and around 20% under budget.”  Cannot complain about that!

Where to next in the sub-Antarctic?  New Zealand’s Antipodes, the United Kingdom’s Gough and South Africa’s Marion are all islands with a single terrestrial alien mammal – the House Mouse…