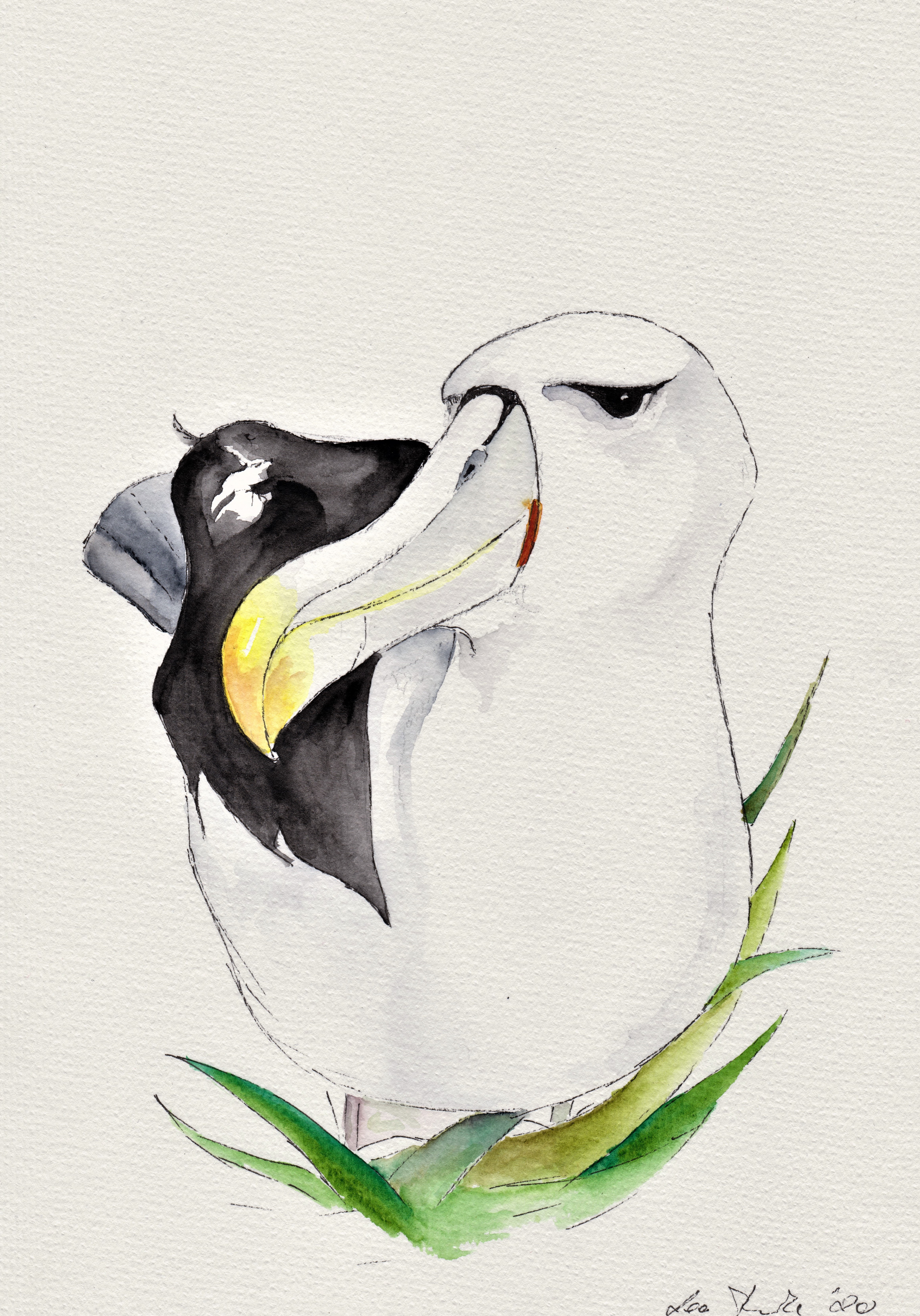 White-capped Albatross by ABUN artist Lee Finke for ACAP; after a photograph by Graham Parker

Graham Parker (Parker Conservation) and colleagues have reported to New Zealand’s Department of Conservation via its Conservation Services Programme (CSP) on field work carried out over 2021/22 on Antipodean Diomedea antipodensis gibsoni and White-capped Thalassarche Albatrosses on the sub-Antarctic Adams and Disappointment Islands, Auckland Islands group.

“This report details the mark-recapture methods and findings for Gibson’s albatross and white-capped albatross at the Auckland Islands.  We present data on the size of the Gibson’s albatross nesting population on Adams Island in 2022 and update estimates of survival, productivity, and recruitment and foraging range to help identify causes of current population size and trends.  For white-capped albatrosses the focus is on estimating adult survival, documenting a study set up to quantify productivity, and drone trials to assess the suitability of drones for quantifying the breeding population size.

Gibson’s albatross. The survival rate of adult females and males has recuperated somewhat from the dramatically low survival rates recorded 2006–08.  However, at 92% the 10-year average survival rate for both sexes remains 4% lower than before the population crash in 2005, and is probably incompatible with population recovery given limited chick production.  Nesting success and chick production for the 2020 and 2021 cohorts could not be determined since we could not visit the island in 2021.  Mark-recapture models have shown a gradual but steady continuing decline in the Gibson’s albatross breeding population.  This is now starting to be reflected in the trend of nest counts as well: estimated island-wide nest numbers showed slow improvement 2008–13, but these gains have stalled with a current growth rate or lambda of 1.1.  The island-wide estimate of Gibson’s albatross nests in 2021–22 (4,434 nests) remains half the size of the pre-crash nesting population.  Transmitting GPS trackers were fitted on 39 breeding birds, along with 23 GLS loggers.  Together, survival, breeding numbers and recruitment show the slow Gibson’s albatross population recovery recorded over the decade 2007–16 has stalled.

White-capped albatross. Banded white-capped albatrosses were resighted at a rate of 0.25 in the study colony of 679 banded birds.  Adult survival was estimated as 89% (95% CI 86–91), taking into account different detection rates of nesting birds and those not on nest during colony visits.  This is similar to but more precise than the last estimate in 2020 (90%, 86–93).  Ten nest cameras were deployed to take time-lapse images of 61 active nests, which should provide data on productivity and refine our understanding of breeding-season timings.  Drone trials indicate that animal responses to a small drone are minimal, and the photographs obtained from programmed-grid overflight at 30–70 m over nests are suitable for counting apparently nesting birds.  Nest contents of apparently nesting birds were also quantified and whole-colony ground counts conducted, illustrating that ease of fitting in drone survey—and the ground-truthing needed to refine the accuracy of later counts from images—around other colony work.”

Access a Power Point presentation by the authors on their research from here.