Featuring ACAP-listed species and their photographers: the Black-footed Albatross by Beth Flint 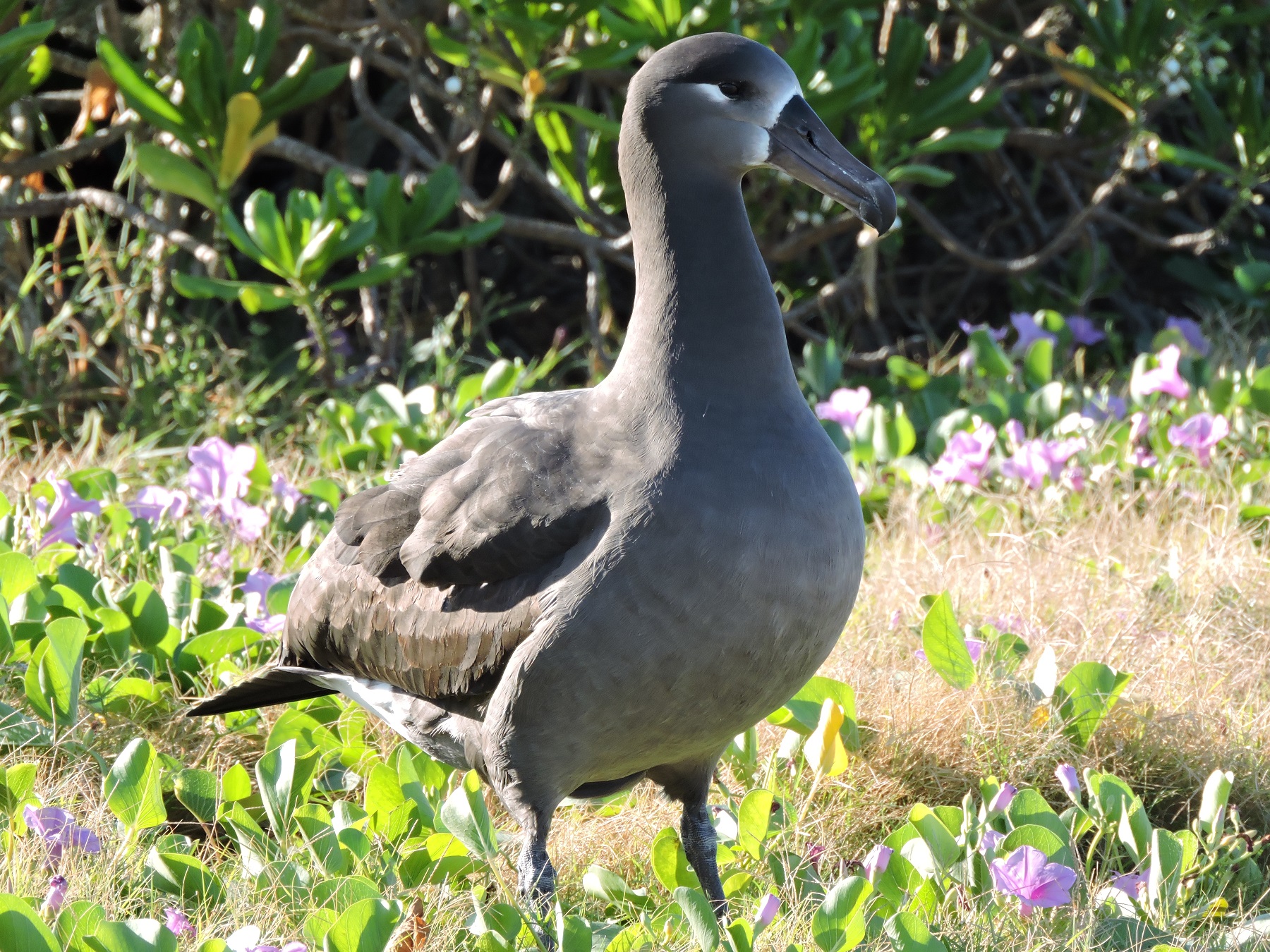 NOTE:  This post continues an occasional series that features photographs of the 31 ACAP listed species, along with information from and about their photographers.  Here Beth Flint  of the US Fish and Wildlife Service writes of the Near Threatened Black-footed Albatrosses Phoebastria nigripes she has known and subsequently worked with since her days as a student. 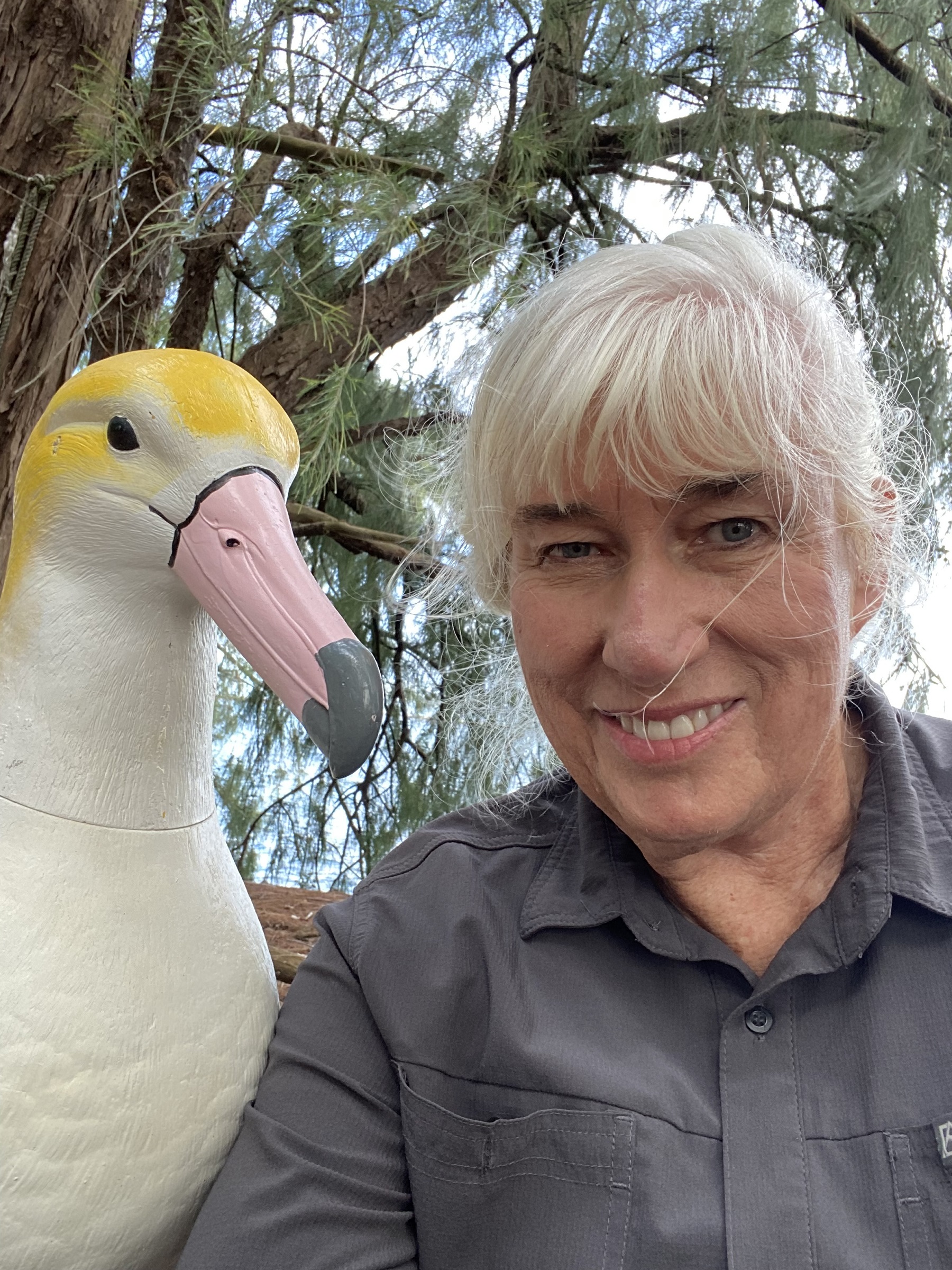 My first encounter with a Black-footed Albatross came as I first stepped of the plane at Tern Island, French Frigate Shoals in January of 1980.  I was there to do fieldwork on Sooty Terns Onychoprion fuscatus and with the typical single-mindedness of a young graduate student had not even thought about the fact that I would be living in a breeding colony of magnificent Black-footed Albatrosses.  I was immediately smitten with these regal, aloof birds, sometimes stoic and sometimes exuberant.  I had fallen in love with colonial seabirds from reading about them during my studies in wildlife biology at the University of Montana and went on to study with Nicholas Collias, the ethologist at the University of California, Los Angeles (UCLA), without ever having set foot in a seabird colony. 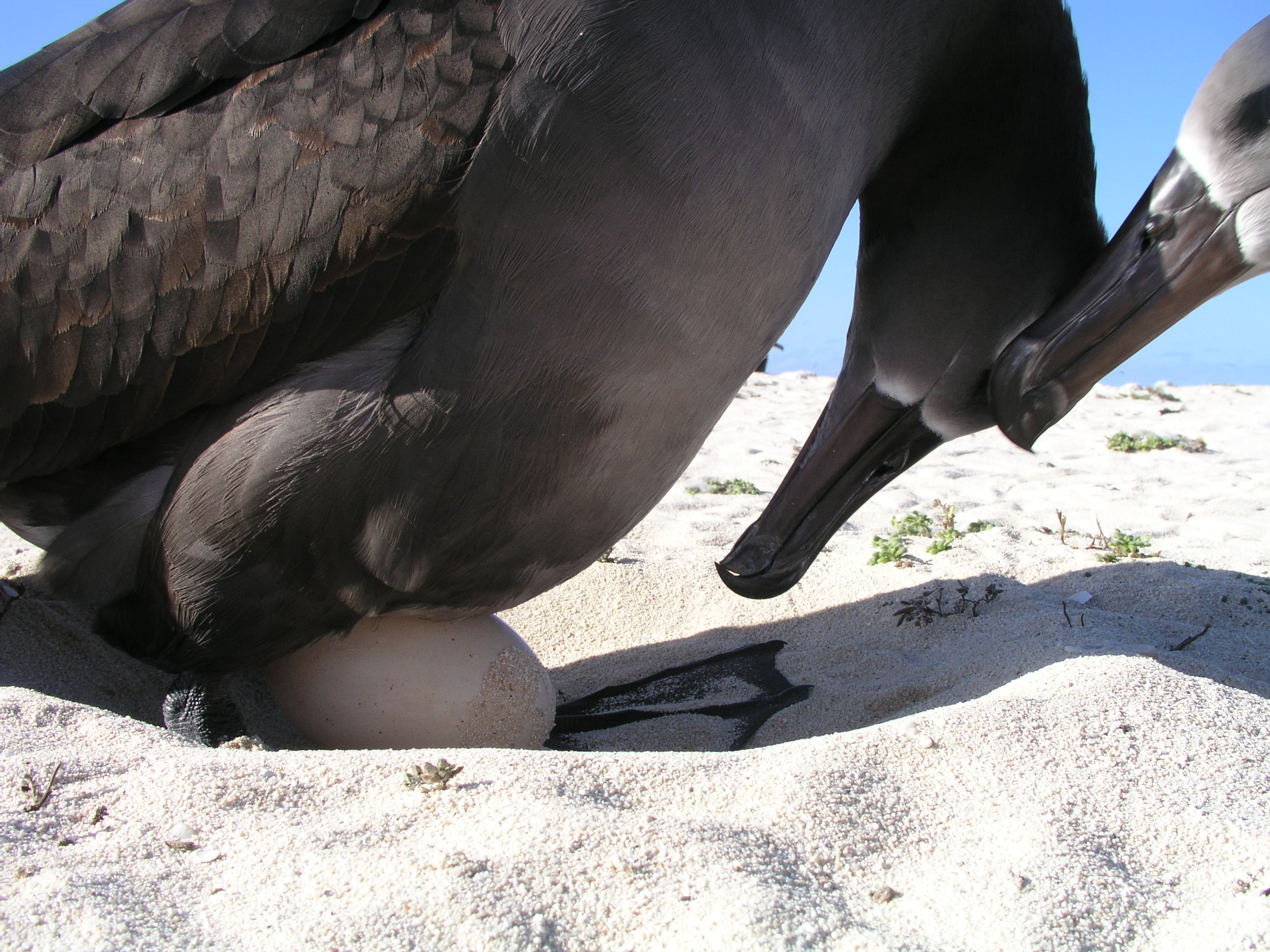 My study site was located in one of the earliest major conservation areas protected in the United States.  Human exploitation of seabirds (particularly Laysan P. immutabilis and Black-footed Albatrosses) on the breeding grounds in the forms of guano mining, egg collection for albumin used in photography, and then feather hunting for stuffing mattresses started afflicting the populations of these birds in the Northwestern Hawaiian Islands in 1891.  In 1903 Teddy Roosevelt, moved by public outcry about the destruction caused by the feather hunters coming from Japan, placed the islands under Navy protection stationed at Midway Atoll and in 1909 declared the entire northern end of the archipelago from Nihoa 1200 miles [1930 km] north to Kure as the Hawaiian Islands Bird Reservation.

Through the years, the name, the boundaries, and the mission have changed and today this area is known as the Papahānaumokuākea Marine National Monument. This enormous no-take Marine Protected Area protects the islands and waters out to the 200-mile [320-km] Exclusive Economic Zone boundary and is 583 000 square miles [1.5 million square km] in area.  It is managed by a Board containing the United States Fish and Wildlife Service, National Oceanic and Atmospheric Administration, State of Hawaii, and the Office of Hawaiian Affairs.  I work for the Department of Interior in the U.S. Fish and Wildlife Service as a wildlife biologist and am responsible for advising the Refuge Managers on technical issues that will help them make management decisions and monitoring populations and habitats in the Marine National Monuments of the central tropical Pacific. 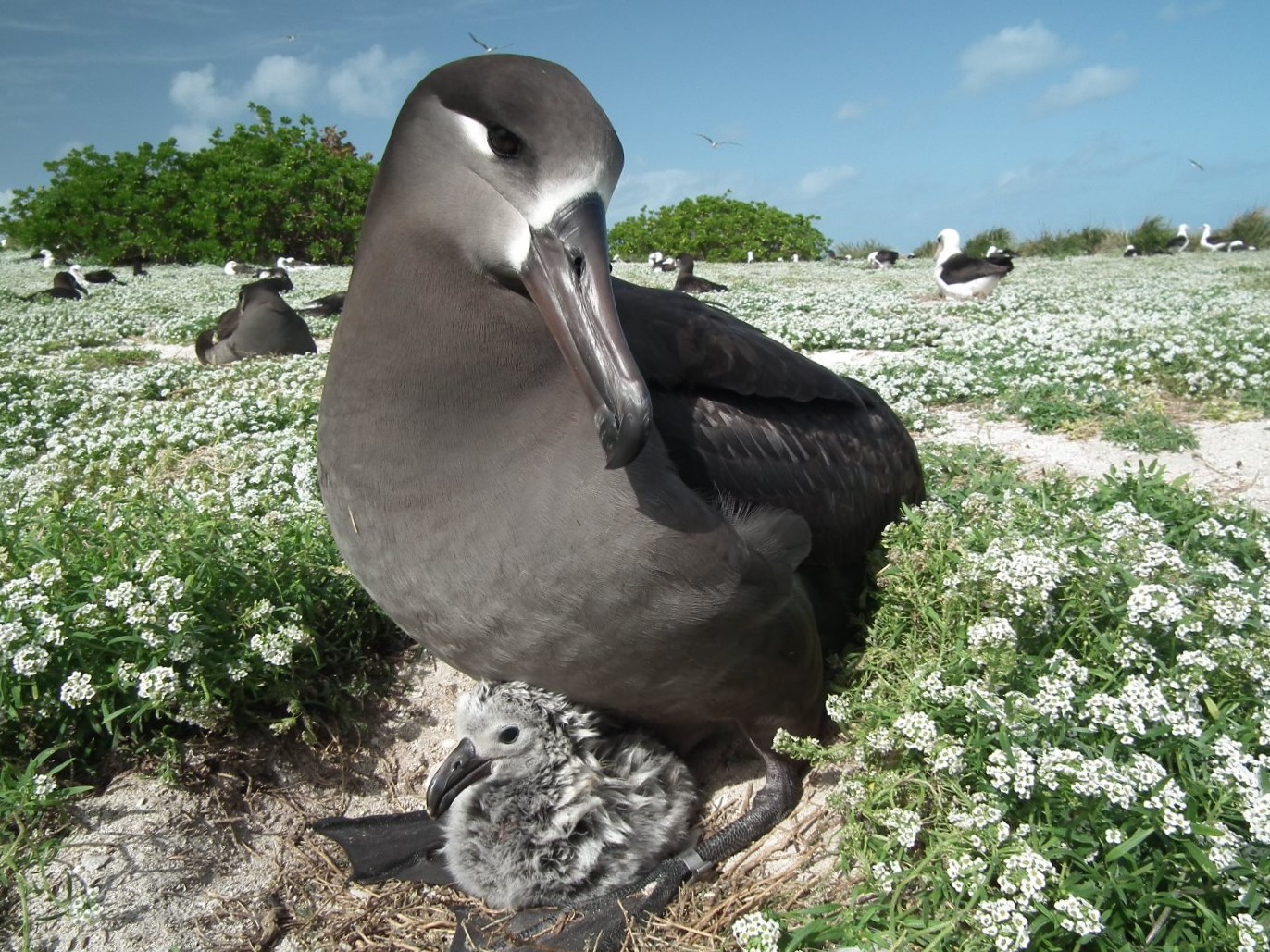 Although these islands are remote and most can only be reached by ship, they are much less rugged than are the breeding homes of many other species in this photo essay series.  A fair amount of research has been undertaken on the breeding biology, movement ecology, effects of contaminants, demography and survival rates of the Black-footed Albatross.  Tens of thousands [have been banded by refuge staff since the middle of the last century.  Citizen scientists have made a huge contribution to monitoring population size by undertaking a complete census of all the albatrosses at Midway Atoll each year since 1992.

Over a century of land and sea-based protection has enabled these populations to recover from the insults of the beginning of the 20th century and current populations are stable.  As with the majority of seabird species, the dominant population level threats for Laysan and Black-footed Albatrosses are introduced predators in the breeding colonies and fisheries interactions.  For almost 30 years the Fish and Wildlife Service and their partners have been tracking the effects of commercial fishing on Black-footed Albatross survival rates and working with colleagues to minimize the negative interactions between this species and fishing gear.  While other more localized problems also exist, it has become increasingly clear that the threat that will eclipse all others for Black-footed Albatrosses is climate change.

Six of the sixteen Black-footed Albatross breeding islands in the world accommodate more than 95% percent of global population of less than 70 000 pairs and are lower in elevation than 25 metres above sea level.  These low islands are already showing periodic inundation due to storms of increased frequency and intensity and accelerating erosion and loss of entire islets.  At French Frigate Shoals three of 10 islets have already washed away completely during storms, rendering thousands of pairs of Black-footed Albatross homeless.  Adults and chicks in the colonies are also exhibiting increased levels of thermal stress and dying in greater numbers from heat injury and the birds face disruptions in prey availability due to hot water events and ocean acidification. 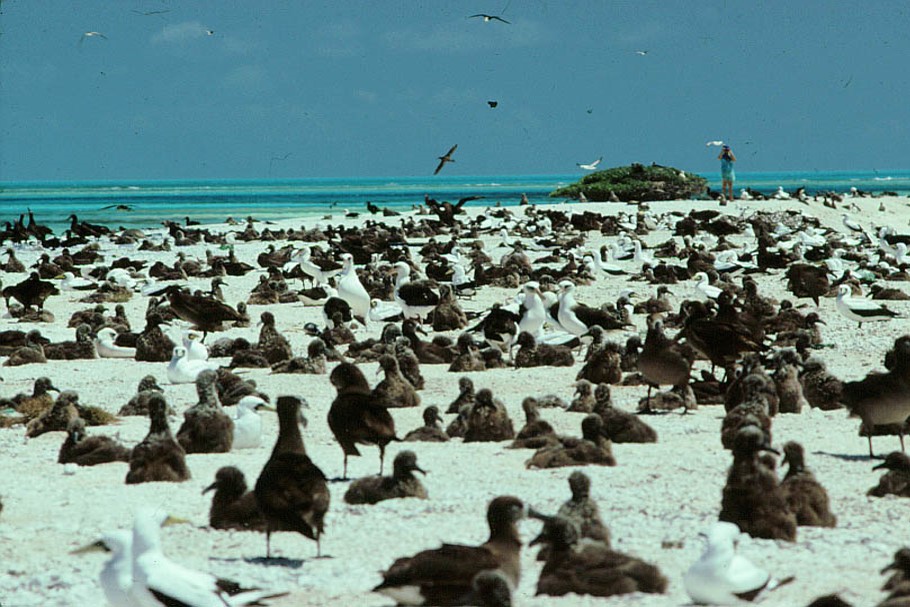 Black-footed Albatross colony (with Latsan Albatrosses and Masked Boobies) on Whaleskate Island at French Frigate Shoals in the spring of 1980.  The entire island was washed away in the 1990s 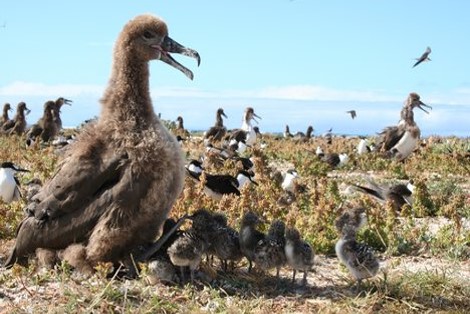 A Black-footed Albatross chick works hard to stay cool with Sooty Tern chicks taking advantage of its shade.  Northern hemisphere albatrosses (Black-footed, Laysan and Short-tailed P. albatrus) are winter breeders, possibly as a phylogenetic holdover from their relatives in the southern hemisphere or perhaps because they breed in the subtropics and tropics so cannot manage ambient temperatures in the summer months at their breeding sites.  Increasingly, there is high mortality when the adults return to the colony during the hot, windless days of early autumn or in the late spring when chicks die by the thousands

Colonial seabirds have had difficulty withstanding the many ecological insults caused by the rampant success of Homo sapiens.  Albatross-like seabirds have moved across the face of the earth for upwards of 60 million years.  They have persisted during sea levels more than 100 metres higher than today.  In some ways these birds possess characteristics that might make us predict they will be better equipped to survive the coming climate troubles than many more sedentary species.  They possess extraordinary mobility and forage over the entire North Pacific Ocean.  They will likely be able to adjust to changed conditions on their foraging grounds.  However, safe breeding sites for birds that cannot withstand mammalian predators have become rare during the age of man.  For Black-footed Albatrosses to persist into the future we may need to restore high islands at latitudes with appropriate thermal conditions by ridding them of rodents, ungulates and carnivores and resort to assisted colonization to help this species through the troubled times to come. 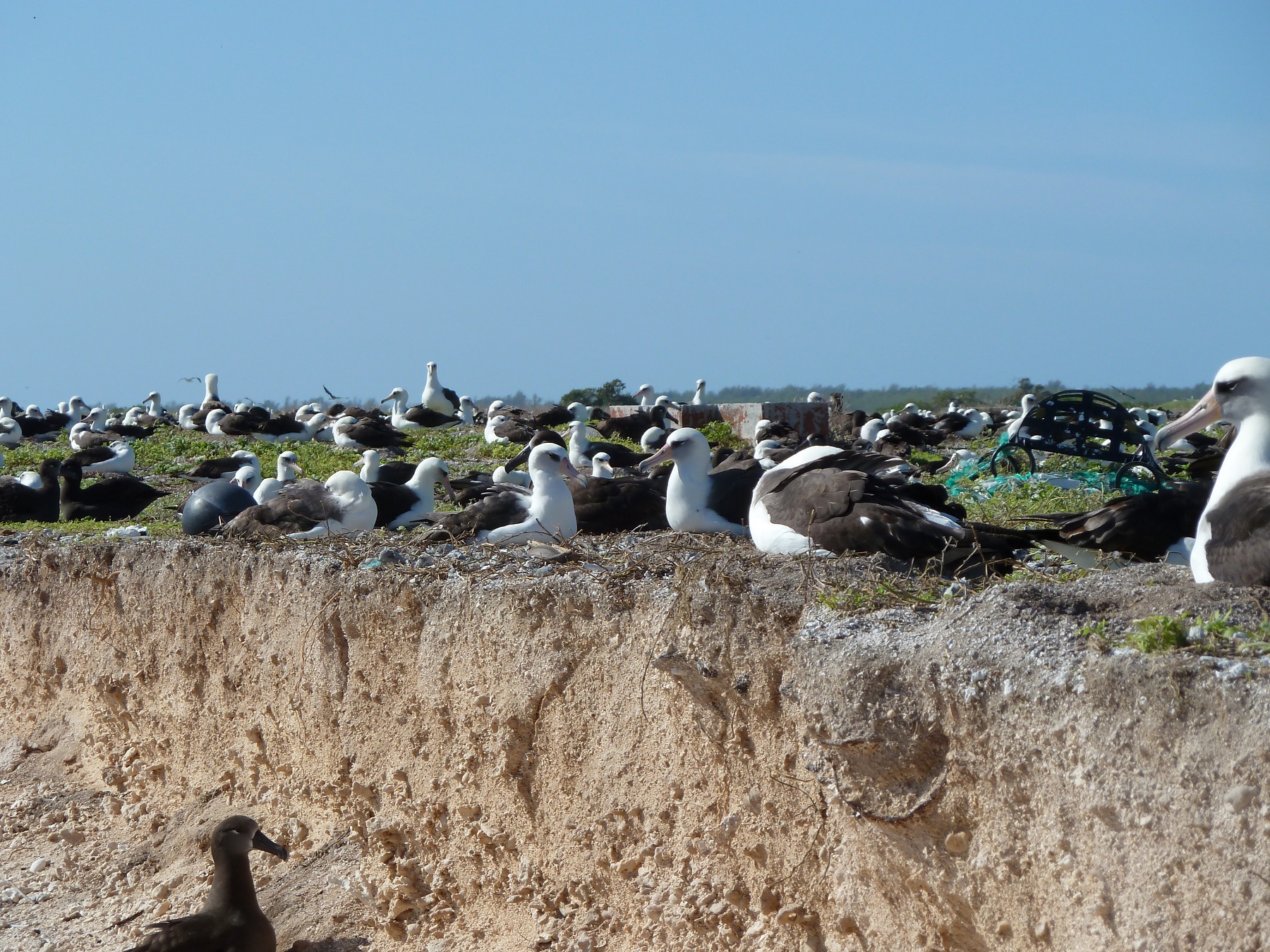 Erosion at Midway Atoll has eliminated hundreds of albatross nests.  Black-footed Albatrosses tend to nest closer to the sea than do Laysan Albatrosses, so were likely affected disproportionately

A partnership involving U.S. Government Departments and NGOs such as Pacific Rim Conservation is implementing an innovaticonservation effort to establish new breeding colonies for seabirds affected by sea level rise and increased storm intensity.  A total of 511 chicks of four species (Laysan Albatross, Black-footed Albatross, Bonin Petrel Pterodroma hypoleuca and Tristram’s Storm Petrel Hydrobates tristrami) has been translocated to a predator-proof fenced area at the James Campbell National Wildlife Refuge on Oahu, primarily from low islands in the Papahānaumokuākea Marine National Monument, over the last six years.  Of those, 471 (92%) have fledged and adult birds of all four species have returned to the site.  Translocated Bonin Petrels have already started breeding and successfully fledging chicks from the refuge.  This conservation effort provides a climate-resilient nesting habitat for species threatened by sea level rise in the low-lying areas of the Monument.  Motivated by the same reasons as described above, USFWS and Pacific Rim Conservation, together with Mexico’s Comisión Nacional de Áreas Naturales Protegidas (CONANP) and the Mexican environmental NGO Grupo de Ecología y Conservación de Islas (GECI) collaborated to reintroduce Black-footed Albatrosses from the USA’s Midway Atoll National Refuge to Guadalupe Island Biosphere Reserve, Mexico.  In early 2021, they transferred 21 eggs and nine chicks to Guadalupe and the 27 surviving chicks were expected to fledge in June.  More birds will be moved in 2022 and 2023. 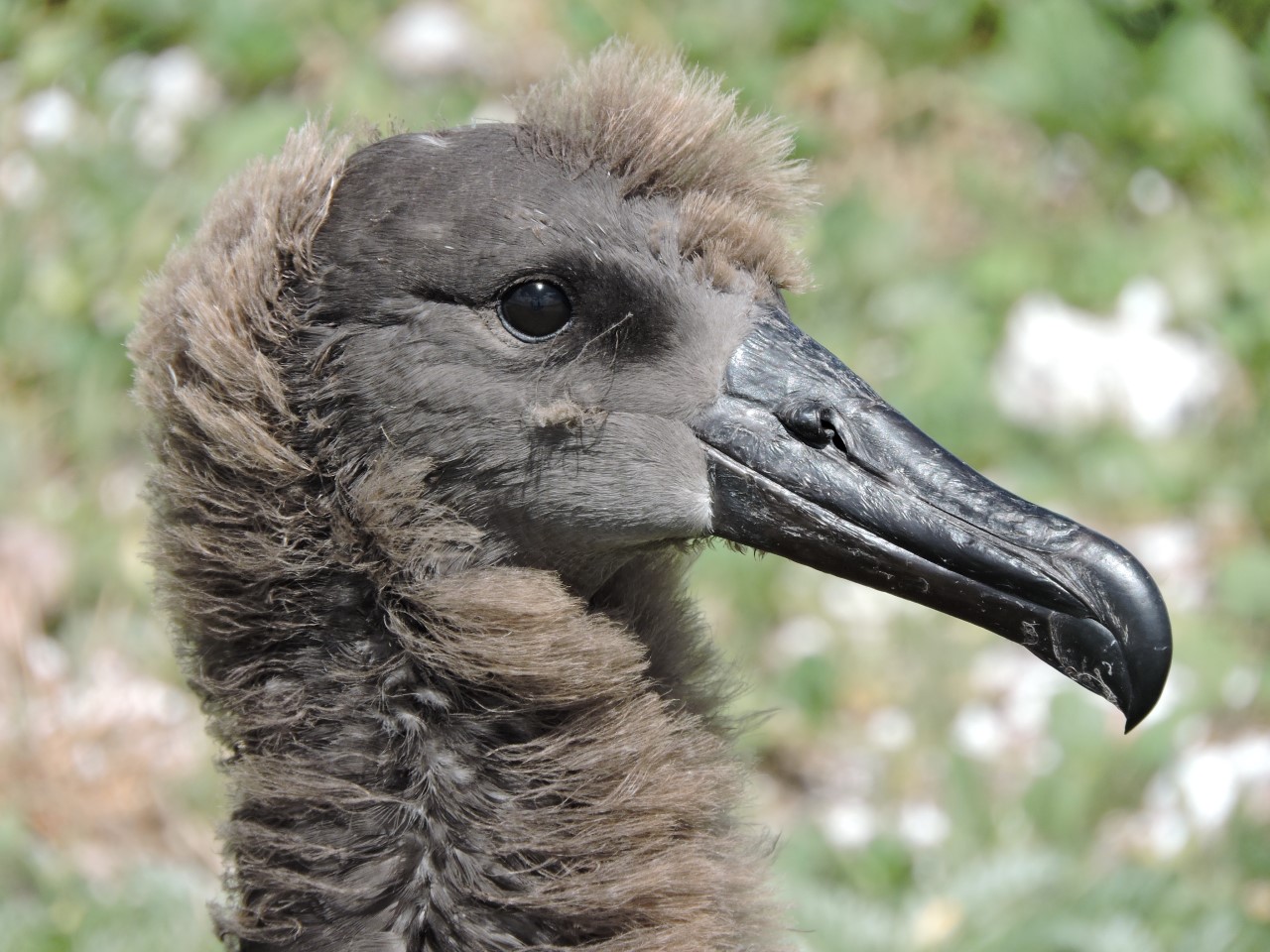