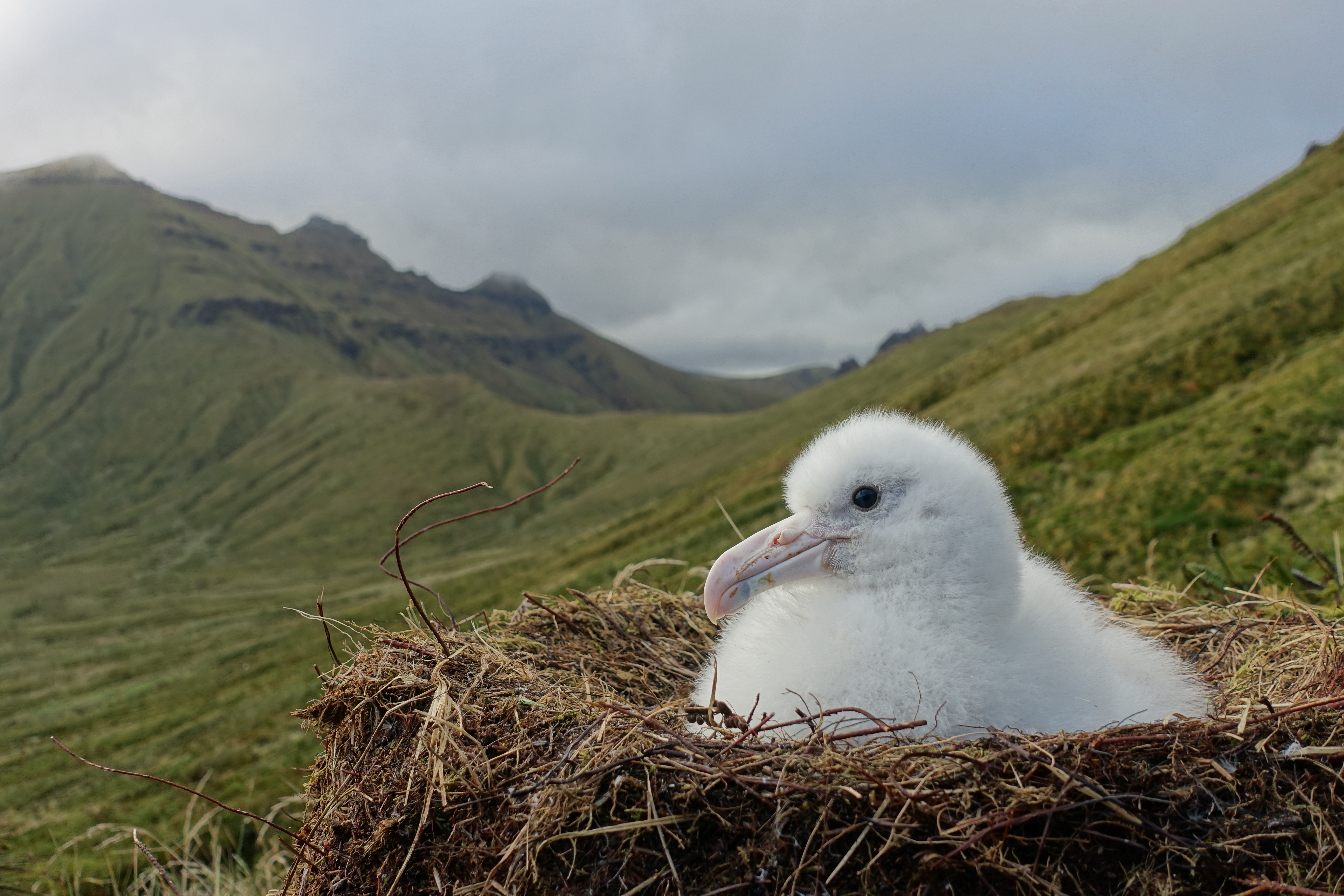 A Tristan Albatross chick in the Gonydale monitoring colony on Gough Island, now safe from mice?  Photograph by Michelle Risi

How have Critically Endangered Tristan Albatrosses Diomedea dabbenena been fairing on Gough Island since the completion of the bait drop against introduced House Mice Mus musculus by the Gough Island Restoration Programme (GIRP) earlier this year?  Seems there has been improvement in breeding success in some areas but not in others, as explained in a recent blog post:

“Every year our Overwintering Team conduct their ‘round island’ count at this time to establish how many Tristan albatross chicks survived the winter to reach a size and age at which they are likely to go on and fledge (in December). This year the weather was too poor for the team to complete the check in one (three-day long) trip and so we were made to wait on tenterhooks for a few days longer than usual. But the numbers are now in and it is fair to say it is a mixed bag.

We always expected chicks would still be lost this year, but we hoped to be able to start baiting before the worst of the winter hardships hit the mice – and consequently, the albatross. During incubation and for the first couple of months of its life, Tristan albatross chicks have a parent close by at all times. At the end of this brood-guard phase, the parents are (largely) both away at sea, returning to provision the chick but not to stay with it. It is possible that albatross chicks are particularly vulnerable at this point, and on Gough this vulnerability is likely exacerbated as it coincides with the start of winter when food options for mice begin to run out.

Our team do two round island counts – one at the start of the year and one in Sept/Oct. But between those times, they also make regular (approximately monthly) checks at two colonies that are closer to home – Tafelkop and Gonydale. At these two colonies, no fresh mouse wounds were observed after the first baiting in the area and chick survival was high. The figures from these sites are amazing – 70.9% at Gonydale and an astonishing 92.9% at Tafelkop – far higher than we’ve recorded before.

But all in all, breeding success for this year across the whole island comes in at 39.7% - not much higher than last year’s 37.2%.

It is crucial to appreciate that this is NOT indicative of the outcome of the eradication operation – most likely merely a reflection of the point at which we were able to distribute bait combined with the end of the brood-guard phase. Importantly, high breeding success across the island would not have been indicative of success either – if mice are still present on the island, they are likely to be few in number and may not need to attack albatross chicks to survive. This is part of the reason why we won’t be able to ascertain whether the eradication attempt was successful for at least two years. Hopefully we will, however, be able to report on greatly improved Tristan albatross breeding success before then.”

Note:  The ACAP Information Officer (with the essential help of friends and colleagues in the field) established the Gonydale and Tafelkop monitoring colonies by staking nests and colour- and metal-banding incubating adults of the two Tristan Albatross demi-populations over the consecutive summers of 2006/07 and 2007/08.  The news of vastly improved breeding success in these two study colonies is thus especially pleasing to him.