The Shy Albatross Thalassarche cauta is endemic to Australia, breeding on only three small islands around Tasmania.  It currently has a global status of Near Threatened, although a long, ongoing review By BirdLife International is considering whether it should be uplisted to Vulnerable.

In Australia, it was already categorized as nationally Vulnerable, but has now been uplisted to Endangered on the country’s threatened species list by the Federal Government.

The Federal Minister for the Environment the Hon. Sussan Ley MP said in a media release: “although significant progress had been made in mitigating threats, through the protection of breeding sites and reductions in bycatch from commercial longline fishing, significant threats still remained.  Bycatch in other commercial fisheries, disease and competition with other seabirds were all key factors in my decision to list the species as endangered.”  The reassessment was conducted “by the independent expert Threatened Species Scientific Committee, which recommended that I uplist the species because of its limited breeding range and population decline.” 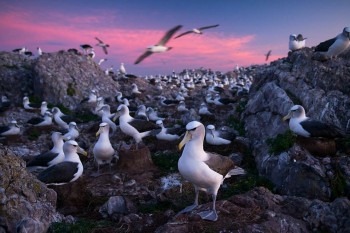 The Minister made the announcement on World Albatross Day last month, writing on her Facebook page:

“On the first international day dedicated to the albatross I have upgraded the threatened species listing for Australia’s Shy Albatross from vulnerable to endangered.  As Australia’s only endemic albatross species, the Shy Albatross breeds on just three islands in the world – all off the coast of Tasmania.  Significant progress has been made in abating threats to the Shy Albatross, including the protection of breeding sites, but bycatch in commercial fisheries and disease were all key factors in my decision.

World Albatross Day is held on 19 June to mark the anniversary of the signing of the international Agreement on the Conservation of Albatrosses and Petrels (ACAP) in Canberra in 2001 - Australia was at the forefront of establishing ACAP to achieve and maintain a favourable conservation status for threatened albatrosses and petrels.”

The global threat status of the Shy Albatross, along with those of all the ACAP-listed species, were considered at last year's meeting of ACAP's Population and Conservation Status Group (PaCSWG5 Doc 03).

The Shy Albatross is included in both Australia’s National Recovery Plan for Threatened Albatrosses and Giant Petrels (2011) and the Threat Abatement Plan for the Incidental Catch (or Bycatch) of Seabirds during Oceanic Longline Fishing Operations (2018).

Read a popular report of the uplisting.

With thanks to Jonathon Barrington, Australian Antarctic Division.