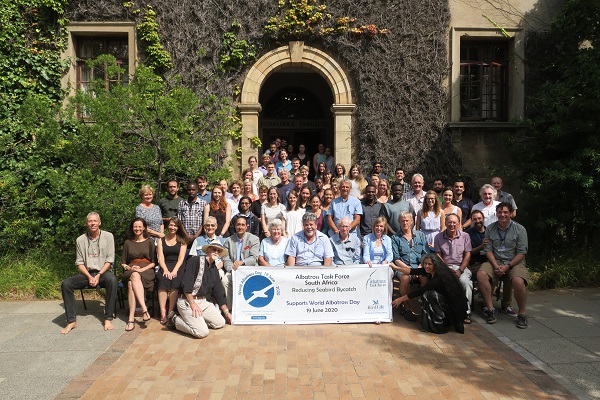 Attendees at the Fitztitute 2020 AGM with a World Albatross Day banner, held by ACAP's Information Officer and Andrea Angel

The FitzPatrick Institute of African Ornithology (known as the ‘Fitztitute’), located within the Department of Biological Sciences at the University of Cape Town, South Africa, is widely regarded as one of the world’s premier bodies for avian research.  Established in 1959, the Institute was identified as a Centre of Excellence (CoE) by the South African Department of Science and Technology and the National Research Foundation in 2004.  It houses the Niven Library, surely Africa's most comprehensive ornithology collection of books, journals and papers.

Peter Ryan, the Fitztitute’s current (and fifth) Director, is the only A-rated ornithologist in the country.  His wide-ranging research interests have centred on seabirds and islands.  ACAP Latest News approached Peter with the request the Institute lends its support for this year’s inaugural World Albatross Day – which was readily granted.  Earlier this month, the Fitztitute held its Annual General Meeting, when postgraduate students give talks to the Institute’s Board and interested university staff and students.  A group photo is a traditional part of the AGM.  Fitztitute graduate Andrea Angel, who is Leader of BirdLife International’s Albatross Task Force in South Africa, brought along a World Albatross Day banner to photograph with the AGM attendees and with albatross researchers currently based at the Fitztitute.

In addition to the photo opportunity, statements of support for ‘WAD2020’ have come from past and present Fitztitute personnel who have worked with albatrosses as set out below:

“It's always a stirring sight to see an albatross, whether soaring over the open ocean, or displaying at their breeding islands.  I hope that World Albatross Day will bring them to the attention of the many people who are unable to see them in the wild”. - Peter Ryan, Director, FitzPatrick Institute.

“Albatrosses are the most threatened group of seabirds.  The biggest threats to their survival are incidental bycatch in fisheries, climate change and invasive alien species at their breeding colonies.  World Albatross Day is a fantastic way to shine a spotlight on these majestic birds and to make people aware of how we can conserve them.” - Kim Stevens, Ph.D.student, FitzPatrick Institute (The foraging ecology and breeding success of Grey-headed Albatross Thalassarche chrysostoma).

“My passion for albatrosses stems from my life-changing experience of spending a year on Gough Island in 2003/04.  There I was awe struck by their beauty, their immense size and grace in the air.  As the stillness, that only remote places have, is broken by the whoosh of the wind through a Tristan Albatross’s flight feathers one can only be humbled.  I count myself as immensely privileged to have had the opportunity to come close to albatrosses and to dedicating the past 15 years of my career to safeguarding them.” - Andrea Angel, Albatross Task Force, BirdLife South Africa.

“I found it fascinating getting to know individual albatrosses while doing colony checks of incubators at their breeding colonies – it may sound a bit odd, but just like pets in our homes, albatrosses have their quirks – some would nibble your glove, some would unfold their leg to helpfully reveal their band, while others were  always snappy!  They’re so elegant and really are remarkable birds”. - Ben Dilley, Postdoctoral Fellow, FitzPatrick Institute. 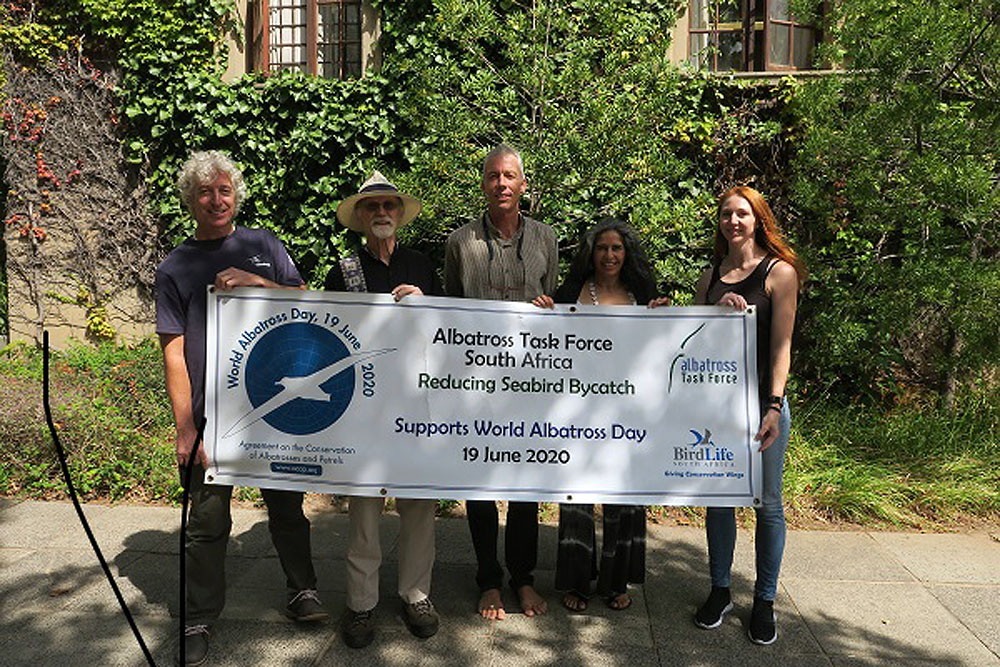 Note:  this meeting and photo opportunity took place shortly before COVID-19 reached the Western Cape, and thus before social distancing became part of the 'new normal'.