A feral cat Felis catus was photographed and videoed feeding from the corpse of a White-capped Albatross Thalassarche steadi chick (Near Threatened) on its nest at South-West Cape on New Zealand’s Auckland Island on 25 and 26 August this year (click here). 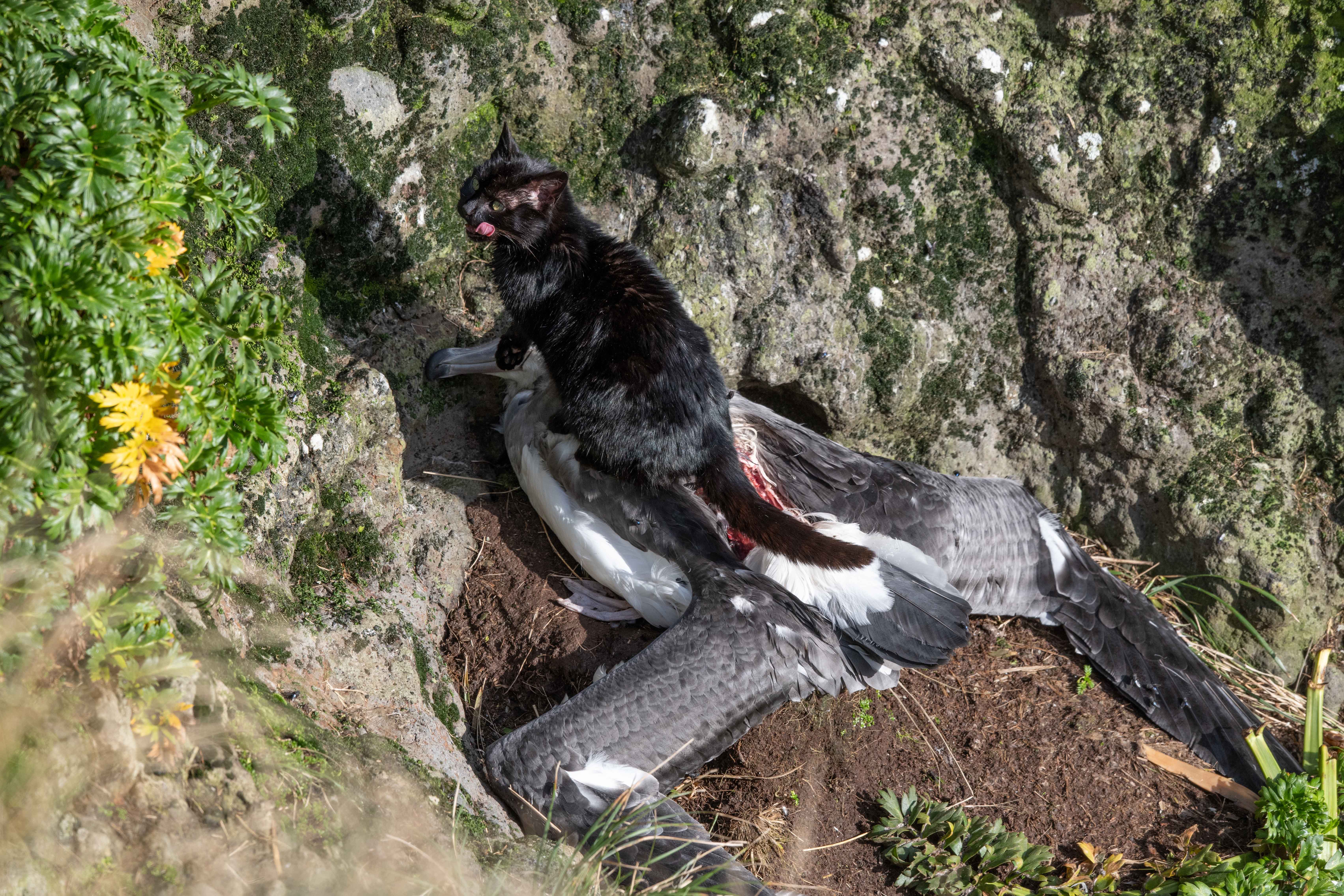 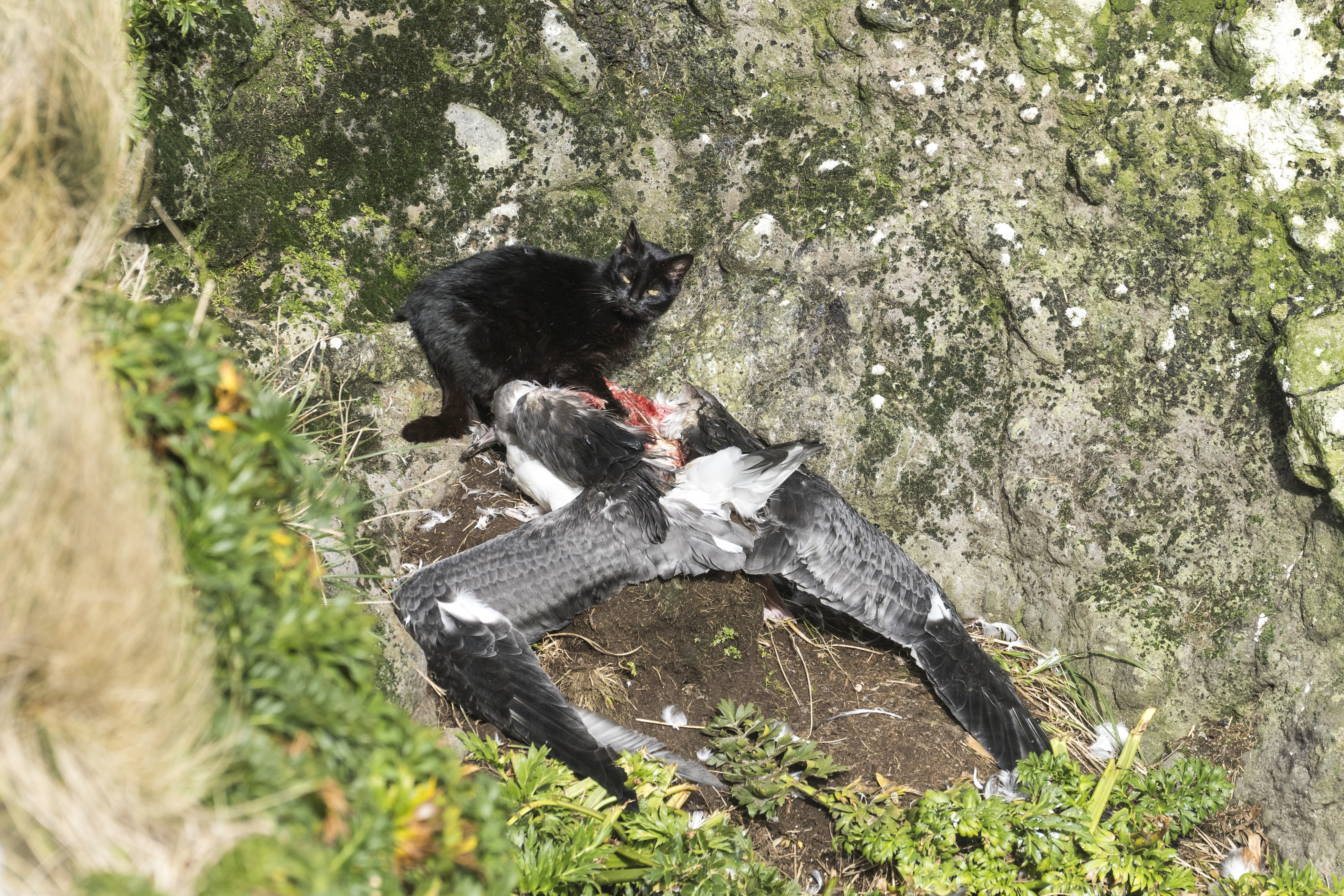 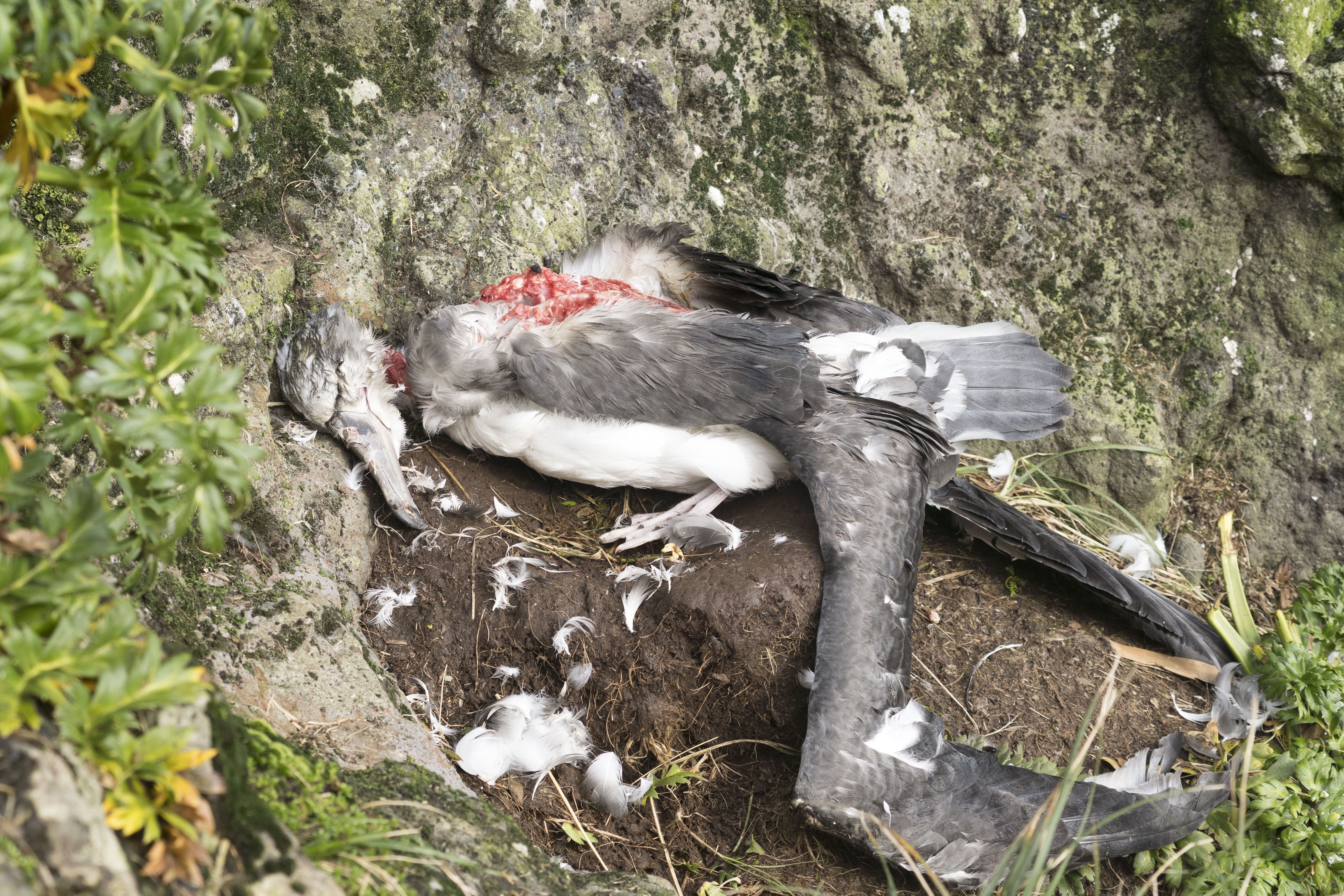 “The cat was first seen basking in the sun about 5 to 10 metres from the dead bird and the photographers waited for a couple of hours before it strolled down the hill and resumed feeding on it and they got the photos.  It was still there the next day.  Unable to say if it was just scavenging or had killed it.  The neck muscles had all been eaten and it was feeding on the back, no damage to the breast at that stage.”

There appear to be few records of feral cats attacking albatrosses (and in this case the cat may have come across a corpse rather than acted as a predator).  A feral cat was seen feeding on the corpse of a Light-mantled Sooty Albatross Phoebastria palpebrata chick on (now cat-free) Marion Island in 1981.  Cats have been thought to have killed a number of Laysan Albatross Phoebastria immutabilis chicks on the Hawaiian island of Kauai in 2015 (click here), although definite evidence of predation appears to be lacking.  A more exhaustive literature search may turn up more records from localities where albatrosses and feral cats co-exist – or once did.

Field work continues on Auckland Island towards the eradication of its cats, as well as of feral pigs Sus scrofa and House Mice Mus musculus (click here).  The most recent field team had photographed and videoed the cat feeding on the albatross.  Maukahuka Pest Free Auckland Island Project Manager Steve Horn reports that the team tested potential cat baits, with three of the four meat baits tested proving appealing to cats.  The winter team's monitoring also found that mouse numbers on the island had exploded after tussock seeding last summer, which appeared to have also caused an increase in the numbers of young cats.  The field team put GPS collars on 11 cats, adding to the 20 animals already being tracked from last summer.  The tracking has revealed cats range up to 70 square kilometres in search of food and move to steep coastal areas when seabirds, including the White-capped Albatross, have their young.

With “Eradicating Island Pests” as the chosen theme for next year’s inaugural World Albatross Day, ACAP Latest News will continue to post on the fortunes of the Maukahuka - Pest free Auckland Island project.  A report on the feasibility of the project is due to be considered by the Department of Conservation's Island Eradication Advisory Group in the coming weeks.

With thanks to Keith Broome, Finlay Cox and Stephen Horn.

Berruti, A. 1981. The status of the Royal Penguin and Fairy Prion at Marion Island, with notes on feral cat predation on nestlings of large birds. Marine Ornithology 9: 123-128.