The Australian Antarctic Division (AAD) at Kingston in Tasmania holds a weekly seminar programme open to the public where it showcases the work of the Australian Antarctic Program.  This month’s lecture “The Secret Lives of Southern Giant Petrels” is presented by Barbara Wienecke (AAD) on the 14th and 15th on behalf of her co-workers John van den Hoff, John McKinlay, Sasa Otovic and Madalyn Riley.  Barbara is a seabird ecologist who has studied mainly penguins over the years.  Her seminar focuses on a study of Southern Giant Petrels Macronectes giganteus in Antarctica  that was based on images obtained from automated cameras that operated all year long. 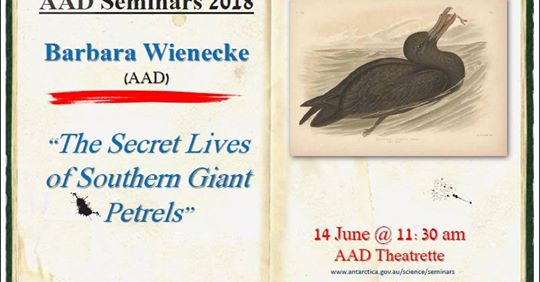 “Southern Giant Petrels (SGPs) are the largest flying birds that breed in Antarctica.  Although they have a circumpolar distribution, only four small colonies are known in East Antarctica; three of those are in the Australian Antarctic Territory and all are located in Antarctic Specially Protected Areas (ASPAs).  Each ASPA has a management [plan] that is reviewed every few years.  Since these birds are easily disturbed by the presence of humans, we are trying to find non-intrusive ways to obtain data that help to determine whether the management plans are successful in protecting the values of the Areas.  This talk reports on the efforts to test the utility of automated camera systems — already successfully deployed near Adélie penguin colonies — to collect data on the phenology of SGPs and the potential to monitor these birds long term with minimal human impact in a cost effective way.  Automated cameras were deployed at Hawker Island (near Davis station) and at Nelly Island (near Casey station).  We analysed of information from images obtained over a 3-year period and compared our findings between the two islands.  The cameras allow us to gain interesting insights into the behaviours of SGPs and deliver some beautiful images as well!”