Sofía Copello (Instituto de Investigaciones Marinas y Costeras, Mar del Plata, Argentina) and colleagues have written on the effect of a fishing closure on albatross and petrel distribution and bycatch in Argentine waters in the journal Marine Policy.

“Fisheries management may impact on a range of seabirds’ traits such as foraging behavior.  There is an extensive hake fishing closure in Argentine waters (HFC) where trawling is banned.  The concentration of fishing effort in the boundary of this area triggered the question of a potential negative effect of seabird bycatch in such area.  The distribution of seabirds attending vessels and their bycatch rates was explored as well as the foraging behavior of Black-browed albatrosses (BBA, Thalassarche melanophris) and Southern Giant Petrels (SGP, Macronectes giganteus) in relation to the HFC.  For this, 55 satellite transmitters were deployed on the birds and discrete behavioral mode was inferred using state-space models.  Seabird attendance at trawlers and bycatch data were obtained from on-board observers.  The spatial distribution of the birds’ bycatch was concentrated in the boundary of the HFC and the distance to the boundary had a significant effect on the interactions. The spatial modeling of seabird attendance revealed a similar pattern with core areas in the margins of the HFC.  The bulk of the core foraging areas of BBAs and SGPs were concentrated in waters adjacent to the HFC.  Besides, the time spent foraging in the boundaries of the HFC was greater than inside the HFC.  The study highlights that the “exporting effect” due to the concentration of fishing effort and seabird foraging in bordering areas may increase seabird bycatch in the neighboring waters.  Hence, the design of management measures for seabird bycatch should contemplate regulations to address these negative side effects.” 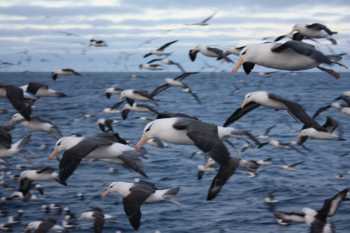 Black-browed Albatrosses congregate behind a fishing vessel in the South Atlantic, photograph by Graham Parker