Feeling bugged out? Caterpillars like nests of the Wandering Albatross

“On the South Indian Ocean Province Islands of the sub-Antarctic, most nutrients are processed through a detritus-based food web.  On Marion Island, larvae of the moth Pringleophaga marioni are one of the key decomposers. Abundance of these caterpillars is higher in newly abandoned Wandering Albatross (Diomedea exulans) nests than other habitats, and this observation has been explained by hypotheses regarding the thermal and nutrient advantages of nests.  These hypotheses require a mechanism for increasing the abundance of caterpillars, since nests are an ephemeral resource, and here, we determine whether caterpillars respond to chemosensory and thermal cues using a laboratory choice chamber approach.  Caterpillars show no significant preference for newly abandoned nest material over no other choice, old nest material, and the common mire moss Sanionia uncinata.  Caterpillars that are acclimated to warm (15°C) conditions do prefer lower (5°C) to higher (15°C) temperatures, perhaps reflecting negative effects of prolonged exposure to warm temperatures on growth.  Caterpillars also show significant avoidance of conspecifics, possibly because of incidental cannibalism previously reported in this species.  Thus, we find no empirical support for nest-finding ability in caterpillars based on chemosensory or thermal cues.  It is possible that adult females or very early instar caterpillars show such ability, or high caterpillar density and biomass in nests are an incidental consequence of better conditions in the nests or deposition by the birds during nest construction.” 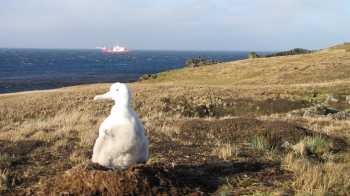 A Wanding Albatross chick on its nest at Marion Island