“The census is undertaken by using maps of previous surveys and counting off each nest with an egg in it (or sitting bird).  In the forest this is hard work but relatively easy compared to the cliffs which comprise nearly the entire coastline; here binoculars are used and counts all written down and cross referenced statistically later.”

A Buller's Albatross at The Snares, photograph by Paul Sagar

“The 2014 census resulted in around 8,000 pairs of Southern Buller’s being counted - remarkably similar to the 2002 count and around double the number reported breeding in 1969.”  This is the first complete census of the species at The Snares since 2002.

Four birds banded on The Snares in 1972 were resighted, 42 years ago, on the trip.  Click here to read of other old albatrosses at The Snares – and elsewhere in New Zealand.

Lise Ruffino (Section of Ecology, Department of Biology, University of Turku, Turku, Finland) and colleagues have published in the journal Pest Management Science on a rat and plant eradication programme on a French Mediterranean island that supports a small colony of 8-15 pairs of Vulnerable Yelkouan Shearwaters Puffinus yelkouan – a candidate species for listing within ACAP.  A few pairs of Scopoli’s Shearwaters Calonectris diomedea have bred on the island in the past.

“Black rats, Rattus rattus, and mat-forming iceplants, Carpobrotus aff. acinaciformi and Carpobrotus edulis, are pervasive pests on Mediterranean islands.  Their cumulative impacts on native biotas alter the functioning of island ecosystems and threaten biodiversity.  A report is given here of the first attempt to eradicate both taxa from a protected nature reserve in south-eastern France (Bagaud Island).  In order to minimise unwanted hazardous outcomes and produce scientific knowledge, the operations were embedded in a four-step strategy including initial site assessment, planning, restoration and monitoring.

Trapping, which resulted in the removal of 1923 rats in 21 045 trap-nights, made it possible to eliminate a substantial proportion of the resident rat population and to reduce the amount of rodenticide delivered in the second stage of the operation.  Forty tons of Carpobrotus spp. were manually uprooted from a total area of 18 000 m2; yet careful monitoring over a decade is still required to prevent germinations from the seed bank.

Two years after the beginning of the interventions, both eradication operations are still ongoing.  Biosecurity measures have been implemented to reduce reinvasion risks of both taxa.  With the long-term monitoring of various native plants and animals, Bagaud Island will become a reference study site for scientific purposes.”

“Hydrogen isotopes have significantly enhanced our understanding of the biogeography of migratory animals.  The basis for this methodology lies in predictable, continental patterns of precipitation δD values that are often reflected in an organism’s tissues.  δD variation is not expected for oceanic pelagic organisms whose dietary hydrogen (water and organic hydrogen in prey) is transferred up the food web from an isotopically homogeneous water source.  We report a 142 ‰ range in the δD values of flight feathers from the Hawaiian petrel (Pterodroma sandwichensis), an oceanic pelagic North Pacific species, and inquire about the source of that variation.  We show δD variation between and within four other oceanic pelagic species: Newell’s shearwater (Puffinus auricularis newellii), Black-footed albatross (Phoebastria nigripes), Laysan albatross (Phoebastria immutabilis) and Buller’s shearwater (Puffinus bulleri).  The similarity between muscle δD values of hatch-year Hawaiian petrels and their prey suggests that trophic fractionation does not influence δD values of muscle.  We hypothesize that isotopic discrimination is associated with water loss during salt excretion through salt glands.  Salt load differs between seabirds that consume isosmotic squid and crustaceans and those that feed on hyposmotic teleost fish.  In support of the salt gland hypothesis, we show an inverse relationship betweenδD and percent teleost fish in diet for three seabird species.  Our results demonstrate the utility of δD in the study of oceanic consumers, while also contributing to a better understanding of δD systematics, the basis for one of the most commonly utilized isotope tools in avian ecology.”

100 pairs of Scopoli's Shearwaters breed on Rachgoun Island, Algeria in the absence of Black Rats

Ahmed Taibi (Department of Agronomy, Aboubekr Belkaid University of Tlemcen, Algeria) and colleagues write in the journal Advances in Environmental Biology on the Scopoli’s Shearwaters Calonectris diomedea that breed on rat-free Rachgoun Island in the Mediterranean.

Rachgoun Island is one of the largest islands of Algeria with more than 26 hectares.  It houses one of the largest colonies of Cory’s shearwater Calonectris diomedea in Algeria.  A shipping of four days (21 to 25 June 2013) followed by several periodic visits were organized on the island and have as objectives to study the reproduction and distribution of this rare species.  The reproductive success is high because of the absence of the rats on the island.  30 nests were studied by reason of one egg per nest.  The nests are dug in the ground with an average opening of 26.9 cm and a total length equal to 95.3 cm.  The egg is deposited to an average of 67.3 cm from the opening.  Nests are placed at a distance of 26.1 m from the sea and at an altitude of 20.9 m. Eggs whitish color have the greatest length of 67 mm and the largest width of 46.3 mm.  The average of volume and weight of eggs are respectively 68.58 cm3 and 62.2 g.

Dani López-Velasco has published on-line a report of a Birdquest tour to Australian and New Zealand sub-Antarctic islands last austral summer in which 48 species of procellariiform seabirds were seen (click here).

Over 18 days aboard the Spirit of Enderby visits were made to the Snares, the Auckland Islands, Macquarie Island, Campbell Island, the Antipodes Islands, the Bounty Islands and the Chatham Islands.  The detailed report contains accounts and photographs of 12 species of ACAP-listed and five species of ACAP-listed petrels: over half the total number of ACAP listed species. 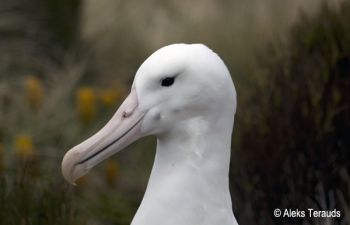