Wisdom, the World’s oldest and most well-known albatross, loses her egg on Midway Atoll

ACAP Latest News has regularly reported on Midway Atoll’s Wisdom, a Laysan Albatross Phoebastria immutabilis, the World’s oldest known albatross calculated to be at least 63 years old (click here).  Wisdom and her partner have bred successfully in the last few years and have been attempting breeding again this year (click here). 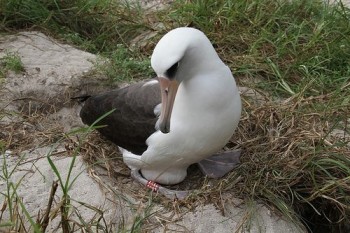 However, news from Midway’s website is that the pair's latest breeding attempt has failed at the egg stage, as described below:

“There comes a time when nature reminds us when there is life, there is death.  As of January 6, 2015 Deputy Refuge Manager Bret Wolfe observed Wisdom, the world’s oldest known albatross, sitting on her nest without an egg, (she and her mate were both sharing incubation duties for most of December 2014).

So what’s up with the missing egg? Of the over 694,000 albatross nests counted on Midway Atoll National Wildlife Refuge during December 2014 a percentage of those nests with eggs have not hatched and some eggs have disappeared.  The island’s natural egg predators such the ruddy turnstones or bristle-thighed curlews can actually take eggs that are not closely attended.  Cockroaches and other scavengers such as mice can quickly move in to clean house and devour shell remnants of damaged eggs.  When this happens the albatross pair abandons their [sic] nest and tries again next year.  Additionally, Laysan albatross occasionally skip a year or even two as they use their precious energy resources to complete a full molt while at sea or simply take a breather to replenish their energy after accomplishing an exhaustive seven-month incubation and chick rearing effort.  Wisdom and her mate have been sighted and they appear to be fine.  Don't forget that Wisdom has maintained a record-breaking track record for rearing chicks beyond an age that humans understood was possible. We are therefore hopeful Wisdom and her mate will return next year to start nature’s cycle of rearing chick number 30 something!”