Several scientific journals and bulletins are dedicated to publishing articles on seabirds, and most contain material of relevance to the biology and conservation of ACAP-listed species. A list follows.  Readers are requested to e-mail the ACAP Information Officer with information on relevant publications not listed.  A separate listing is available for newsletters that deal with procellariiform species and/or bycatch issues. 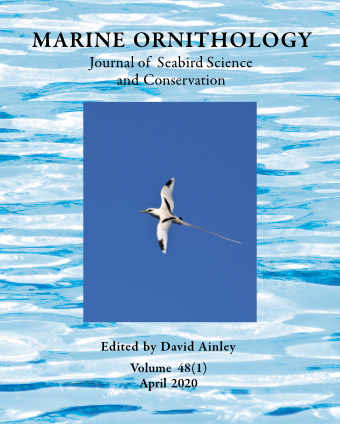 Was published three or four times a year by the (UK) Seabird Group and the Dutch Seabird Group (Nederlandse Zeevogelgroep) in eight volumes from 1999 to 2006 (but last issue mailed in 2008). ISSN 1388-2511.  No longer published.  PDFs of whole issues may be viewed here.

Published nominally twice a year by the Australasian Seabird Group, a special interest group of Birds Australia.  First issue January 1973. From Issue 52 in November 2010 it was replaced by an eBulletin with approximately quarterly issues.  Editor: Lorna Deppe.

Published twice a year by the Pacific Seabird Group (www.pacificseabirdgroup.org).  First issue (as Pacific Seabird Group Bulletin) January 1974.  "Beginning in 2014, spring and fall issues were combined in one volume and published at the end of the calendar year and printed copies were no longer produced. " Editor: Jennifer Lang: editor@pacificseabirdgroup.org.  ISSN 10899-6317.  Published in both paper copy  until 2013 and on line from Vol. 36 of 2009.  Main articles are refereed.  Latest issue Vol. 46, No. 2 of 2019..

Published annually by the Seabird Group. Editor: Richard Sherley (r.sherley@exeter.ac.uk). Published (as Seabird Bulletin) from August 1965 until 1998 (Vol. 20 as Seabird) when replaced by Atlantic Seabirds and has recommenced publication from Vol. 21 for 2008.  Current issue Vol. 31 of 2018. All back numbers available online.  Articles are refereed.  ISSN 1757-5842.

Published by the Dutch Seabird Group (Nederlandse Zeevogelgroep).  Twelve volumes published from 1987 to 1998.  Replaced by Atlantic Seabirds.  Sula recommenced publication as a quarterly from Vol. 21 in 2008.  Current issue: Vol. 28 of 2020.  ISSN 0926-132X. Editor: Guido Keijl.  Mainly in Dutch with English summaries.  Not refereed.