Research on Sooty Albatrosses on Gough Island: are they at risk to mice?

In October 1982 I set up a small study of ACAP-listed Sooty Albatrosses Phoebetria fusca on Gough Island in the South Atlantic during the annual relief of the South African weather station.  With colleagues at the University of Cape Town’s FitzPatrick Institute I colour- and metal-banded incubating birds along the coastal cliffs in Transvaal Bay near the weather station.  The study continued annually until the 1989/90 season (click here).  In two years meteorologists at the weather station followed the fortunes of the nests marked in September/October until the surviving chicks fledged the following year - with markedly different results.  In 1982/83 10 chicks fledged out of 11 eggs laid (giving a breeding success of 91%), but in contrast in 1984/85 only two fledglings survived out of again 11 eggs (15%).

In 2012 the study was resuscitated in much the same section of coastal cliffs (click here).  This time 23 nests in which eggs appeared were followed through the breeding season, from which only eight chicks fledged this year (34.8%).  In four years within the period 2000 to 2010 monitored areas in which counts of nests at the time of egg-laying and again at pre-fledging were made breeding success averaged 48 ± 5% (click here). 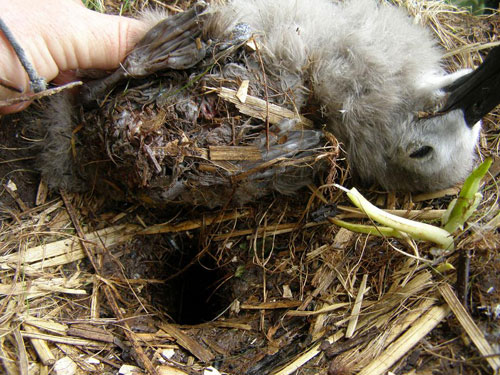 Is the sometimes poor breeding success caused, at least in part, by attacks from Gough’s predatory House Mice Mus musculus that resulted in the deaths of two Sooty Albatross chicks in 2008 as was reported this year in the journal Antarctic Science (click here)?  The second year of the new study is now underway with the first study egg appearing on 27 September.  Hopefully breeding success will be better once the mice are eventually eradicated from the island.

Click here to read of extra-pair copulation in Gough’s Sooties observed in 2012.

With thanks to Mara Nydegger for information.

Research on ACAP-listed species on the outer islands of Tristan da Cunha is funded by the UK's Overseas Territories Environment Programmeand the Darwin Initiative Programme via the Royal Society for the Protection of Birds and by the FitzPatrick Institute, University of Cape Town.  It is conducted with the support and approval of the Tristan Conservation Department and the logistic support of the South African Department of Environmental Affairs.