From low to high: translocating Black-footed Albatross chicks from Midway to Oahu to combat sea-level rise

ACAP Latest News has previously reported on plans to move Black-footed Albatross Phoebastria nigripes chicks from low-lying Midway Atoll to be artificially reared in the James Campbell Wildlife Refuge on Oahu.  The aim of the project is to create a new breeding colony that will not be at risk to sea-level rise (click here). 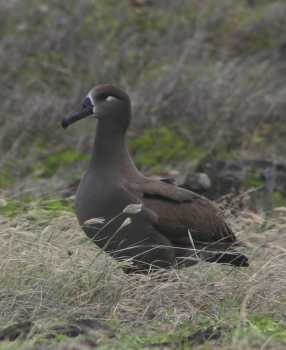 We can now report that 15 chicks were collected on Midway last week from nests close to the sea’s edge and thus deemed to be at risk to wash-over by big waves from storms by members of the environmental NGO Pacific Rim Conservation.  Following a flight and a blessing, the downy chicks are now safely ensconced in their new home.

The chicks will be raised for the next five months in the hopes of starting the first Black-footed Albatross colony on a main Hawaiian island.  The exercise is intended to be repeated for the next three to five years “in order to move enough birds to start a new colony that is safe from sea level rise, and protected from predators within a newly fenced, predator-free area”. Click here for the full story and a suite of illustrations.

Pacific Rim Conservation is already involved in hand-rearing Laysan Albatross P. immutabilis chicks  in the James Campbell Wildlife Refuge that been hatched from eggs collected on the island of Kauai, with the third year of translocations now underway (click here).  In time, if all goes as planned, the refuge will support breeding populations of two albatross species safe from climate change.