The Sixth Albatross and Petrel Conference went off well in Spain last month. Whither IAPC7?

The 6th International Albatross and Petrel Conference (IAPC6) was held in Barcelona Catalonia, Spain, from 19-23 September 2016 in the historic Paranimf (Paranymph) of the University of Barcelona.  About 150 researchers from all over the World, including 50 MSc and PhD students, attended.  Among the delegates were ACAP's Science Officer and several members of its Advisory Committee and working groups. 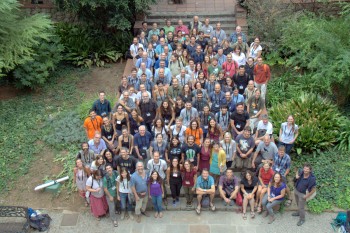 Approximately 100 oral presentations were given and 51 posters displayed, with notably more offerings on studies on the smaller, burrowing procellariiforms (especially shearwaters) than during the previous five albatross and petrel conferences.  Heading each oral session was one of 12 keynote presentations and there were two poster sessions.

Hadoram Shirihai spoke on the discovery and rediscovery of six petrel species at the opening reception and Frank Zino closed the conference with an account on conserving the Endangered Zino’s Petrel Pterodroma madeira.  Awards were given to students to recognize excellence in oral and poster presentations at the closing ceremony.

With general agreement that IAPC6 under the Chair of Jacob González-Solís and his Local Organizing Committee was an enjoyable and well-organized meeting, thoughts will now start to turn to where (and when) next?  It seems that an offer to host an IAPC7 in four to five years’ time is likely to be welcomed by the procellariiform community.

Oral and poster presentations on ACAP-listed species and bycatch issues are given below by presenting author and title.  Click here to access the programme and abstracts booklet.  Videos of the opening and closing talks, keynote presentations and workshops may also be found on the IAPC6 website here.

Arcos, J.M.  A new scenario for Mediterranean fisheries: where do seabirds fit?

Boulinier, T.  Infectious diseases as a threat to albatrosses and petrels: from basic immuno-ecology to perspectives for conservation

Bourret, V.  Testing a vaccine against avian cholera in albatrosses: combining observational and experimental data in a remote seabird community

Bretagnolle, V.  A quick overview of the forthcoming “Albatrosses, petrels and shearwaters of the world: a handbook to their taxonomy, identification, ecology and conservation”

Carneiro, A.P.B.  Sex differences in movements, distribution and habitat use of white-capped albatrosses from New Zealand during the nonbreeding period

Debski, I.  Prioritising research and management of at-sea threats to New Zealand seabirds

Gianuca, D.  Influence of fisheries, climate and environmental cycles on the survival and breeding success of giant petrels

McInnes, J.C.  Methods to assess albatross diet past, present, and future – assessing priorities across their range

Oro, D.  What can research on albatrosses and shearwaters teach us about the population dynamics of long-lived organisms?

Pardo, D.  Demographic buffering in declining populations: can pre and non-breeders save the grey-headed albatross?

Ponchon, A.  At-sea activity patterns of black-browed albatrosses during the breeding and non-breeding season

Reyes-González, J.M.  Multi-year tracking of seabirds as a tool to develop adaptive management strategies: the case of

Welch, A.J.  New approaches to an old question: exploring the evolutionary history of albatrosses and petrels

Afán, I.  Where to head? Investigating the role of wind and productivity patterns in driving the foraging destinations in a critically endangered seabird [Balearic Shearwater]

Barbosa, A.  A review of the parasites of Antarctic albatrosses and petrels

Waugh, S.M.  Filling blanks on the map: Where do Westland petrels feed and how does marine protection in New Zealand assist their conservation?