Candling of Near Threatened Laysan Albatross Phoebastria immutabilis eggs by Pacific Rim Conservation has commenced to determine which will be selected for translocation next year from the Pacific Missile Range Facility (PMRF) at Barking Sands, Kauai to the James Campbell National Wildlife Refuge on Oahu in the USA’s Hawaiian Islands.  Twenty of 24 eggs candled so far were deemed to be fertile (click here).  This is the second of three planned seasons to establish a new breeding colony.  Ten hand-fed chicks hatched from artificially-incubated eggs successfully fledged earlier this year (click here and follow the string backwards).

“PMRF’s runway area has swift wind conditions and wide, open topography that make for perfect albatross breeding terrain.  The problem is that the birds pose a collision hazard in the runway zone, putting themselves, the aircraft and flight crews at risk.”  Because of this about 70 eggs are removed annually.  Some of the fertile eggs have been given to incubating birds elsewhere on Kauai that have infertile eggs, some laid by female-female pairs.  Along with removing eggs from the runway area about 200 birds are moved each year to elsewhere on the island.  Read more on the translocation of Laysan Albatrosses and their eggs here. 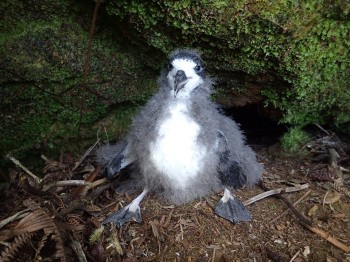