Tropical Shearwater found breeding for the first time on Desroches Atoll, Seychelles - in the presence of rats

Desroches is a sandy 324-ha atoll in the outer Amirantes Group of the Seychelles in the western Indian Ocean, managed by the Islands Development Company and containing a five-star hotel from 2007 along with a conservation centre and a team from the Island Conservation Society (ICS).

On a recent visit this year James Russell of the University of Auckland surveyed the island’s Wedge-tailed Shearwater Puffinus pacificus colony with Gérard Rocamora and Pep Nogués of the ICS .  While counting occupied burrows the call of a Tropical Shearwater P. bailloni (Least Concern) was heard, allowing an incubating bird to be found and photographed.  This constitutes the first definite breeding record of the species for the Amirantes Group. 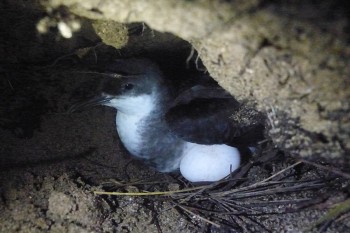 Desroches supports Black Rats Rattus rattus and it is thought surprising that the shearwaters have commenced breeding in their presence, although local control of rats around the hotel complex at the western end of the island does take place.

James Russell considers that eradicating the rats “would be a great initiative for the new hotel owners to take in order to grow tourism and restoration on the island.  Until then, ongoing control of rats around both the eastern and western points of the island would guarantee the longevity of these shearwater colonies, one of the few native bird species on the island”.

Read more on the discovery here.

With thanks to James Russell for information.