Having developed from egg to fledgling over the last seven to eight months, the Black-browed Thalassarche melanophris and Grey-headed T. chrysostoma Albatross chicks at Bird Island, South Georgia (Islas Georgias del Sur)* have been departing recently on their inaugural flights over the Southern Ocean.  It is rare to see the precise moments of their first flights, but albatross zoological field assistant Lucy Quinn witnessed just such an event from one of the colonies near the research station, where the albatross populations have been monitored for more than 30 years.  She reports to ACAP Latest News:

"The first flight of one Black-browed Albatross fledgling was ungainly and, unfortunately, was to be its last.  It was not flying particularly strongly, flapping rapidly just to stay airborne, but was at least heading out to sea. However, within 10 seconds of take-off two Subantarctic Skuas Catharacta antarcticus appeared (based on their degree of coordination they were likely a pair), and took it in turns to harass the fledgling and peck at its back.  They were quickly joined in flight by three Northern Giant Petrels Macronectes halli.  Apparently trying to escape, the fledgling turned back towards land.  As the skuas continued to harass the albatross from above, one of the giant petrels came from below to seize its tail, eventually downing the bird.  The giant petrels landed, followed closely by the skuas.  In total, the entire predation event took less than six minutes from the time the chick left its nest.  The giant petrels then killed and consumed the fledgling. 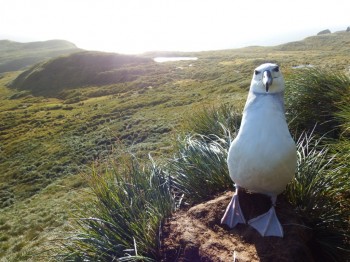 A Black-browed Albatross chick close to fledging in a study colony on Bird Island, photograph by Lucy Quinn 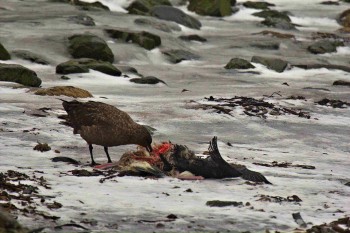 A Subantarctic Skua feeds on the carcass of an albatross chick on Bird Island, photograph by Lucy Quinn 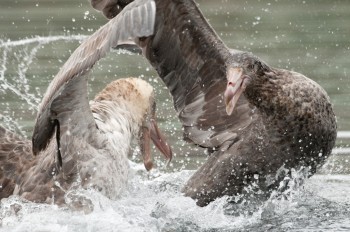 Giant petrels are the main predators of albatross chicks on Bird Island around the time of fledging, photograph by Alastair Wilson

Another fledgling was seen being harried in flight later the same day.  This behaviour has not been reported before at Bird Island and begs the question as to how many albatross chicks are depredated shortly after fledging, either on their first flight or close to land before their flying skills are well developed."

With thanks to Andy Wood.