Feral cats are thought to be causing a decline of Streaked Shearwaters on Japan’s Mikura Island: what to do with them? 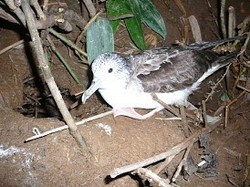 “A Chiba Prefecture-based research institute is looking for cat lovers to adopt kittens of feral cats inhabiting a Tokyo island in a bid to protect seabirds that nest there.

Some 90 percent of the streaked shearwater, a species of seabird, is found in Japan, and Mikura Island, a Tokyo island about 5 kilometers in diameter, is the largest home to the species. They inhabit the island from around March to November each year. In recent decades, the seabird's numbers have been falling mainly as feral cats living on the island feed on them.

Senior researcher Nariko Oka at Yamashina Institute for Ornithology expresses concern over the safety of the species, saying that seabirds like the streaked shearwater that breed in groups may face risk of drastic decline in number if we overlook possible causes, in the way the albatross was driven to become an endangered species.

In a Tokyo Metropolitan Government study conducted in 1978, the number of the streaked shearwater living on Mikura Island was estimated to be between 1.75 million and 3.5 million. According to an Environment Ministry study in 2007, however, the figure had dropped to 880,000, and then to 770,000 in 2012, meaning that the figure has been falling by some 20,000 a year.

Since fiscal 2005, the municipal government of Mikura Island has captured a total of 389 feral cats, neutering or spaying them to reduce their numbers, but most of them are released on the island after their operation.”

“Oka says, ‘Leaving feral cats that have high hunting ability will put numerous kinds of wild animals on the island in danger of extinction.’

The institute is using measures taken on the Ogasawara Islands, a UNESCO world heritage site, as an example, and is looking for people outside Mikura Island who can offer new homes to those feral cats.

According to the Environment Ministry, feral cats feeding on wild animals has become a serious concern on remote islands across the country, including Teuri Island in Hokkaido, Kagoshima Prefecture's Amami Oshima islands and Tokunoshima Island, as well as the northern part of the main island of Okinawa Prefecture.

Oka says feral cat adoption is scheduled to begin on Mikura Island this fall with cooperation from the municipal government, the Tokyo Veterinary Medical Association and other parties. As a trial, the institute is looking for homes off the island for kittens as they adapt to living with humans relatively easily.”