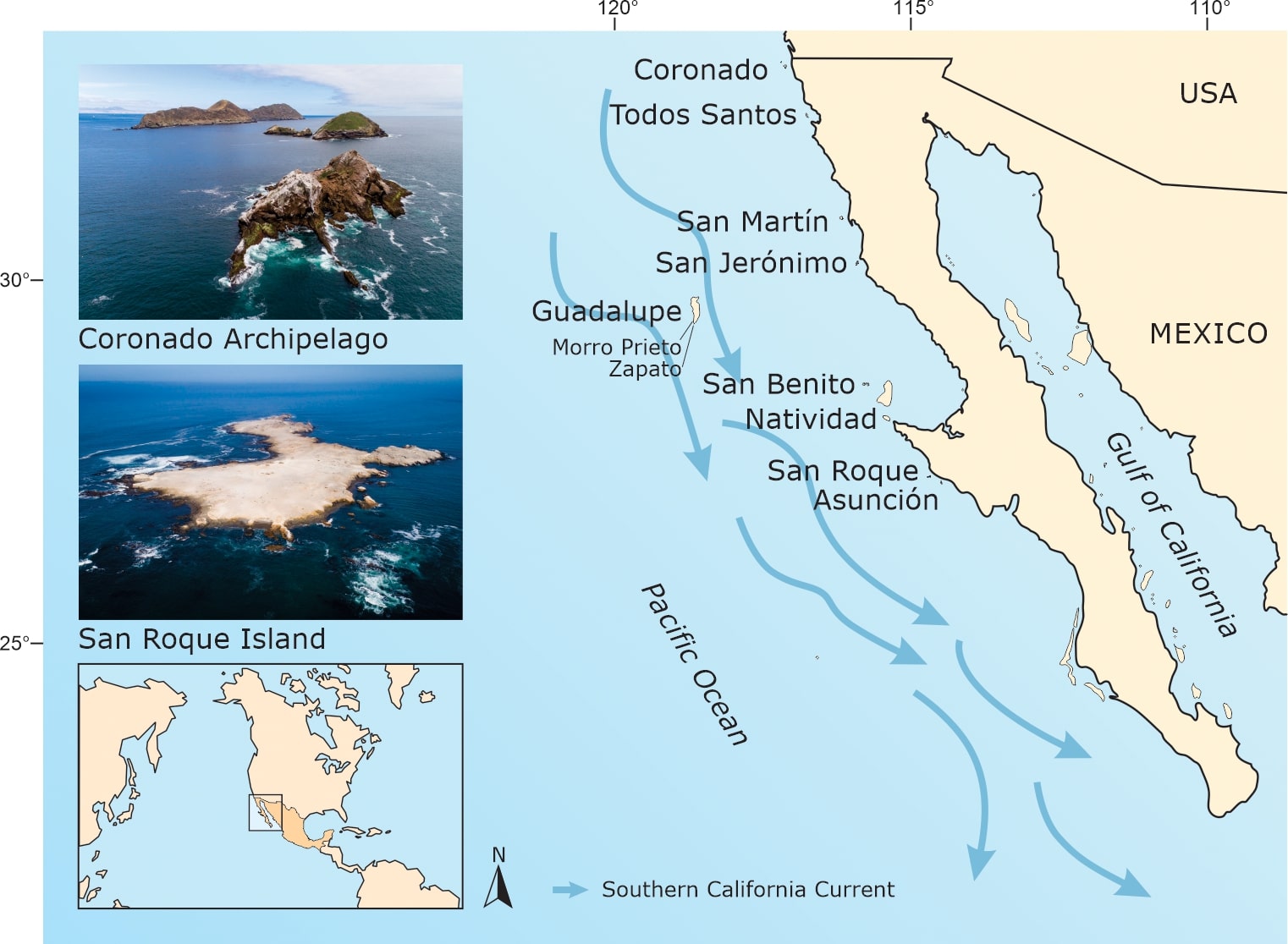 Map of the Baja California Pacific Islands, a seabird hotspot where breeding populations have been systematically monitored for almost two decades.

A study on population trends of seabirds on islands in the Mexican Pacific off the Baja California Peninsula has found that a holistic approach to conservation has had a cumulative positive effect on seabird populations including Albatross, Petrel and Shearwater species.

The creation of protected areas, the eradication of invasive alien species, active restoration with social attraction techniques, and long-term monitoring were conservation and restoration measures enacted within the island group and identified in the research drivers behind the islands becoming a safe haven for seabirds.

“The Baja California Pacific Islands (BCPI) is a seabird hotspot in the southern California Current System supporting 129 seabird breeding populations of 23 species and over one million birds annually. These islands had a history of environmental degradation because of invasive alien species, human disturbance, and contaminants that caused the extirpation of 27 seabird populations. Most of the invasive mammals have been eradicated and colonies have been restored with social attraction techniques. We have recorded the number of breeding pairs annually for most of the colonies since 2008. To assess population trends, we analyzed these data and show results for 19 seabird species on ten island groups. The maximum number of breeding pairs for each nesting season was used to estimate the population growth rate (λ) for each species at every island colony. We performed a moving block bootstrap analysis to assess whether seabird breeding populations are increasing or decreasing. San Benito, Natividad, and San Jerónimo are the top three islands in terms of abundance of breeding pairs. The most widespread species is Cassin’s Auklet (Ptychoramphus aleuticus) with 14 colonies. Thirty-one populations of 14 species are significantly increasing while eleven populations of seven species are decreasing. We did not find statistical significance for 19 populations, however, 15 have λ>1 which suggest they are growing. Twelve of the 18 species for which we estimated a regional population trend are significantly increasing, including seven surface-nesting species: Brandt’s Cormorant (Phalacrocorax penicillatus), Brown Pelican (Pelecanus occidentalis), Caspian Tern (Hydroprogne caspia), Double-crested Cormorant (P. auritus), Elegant Tern (Thalasseus elegans), Laysan Albatross (Phoebastria immutabilis) and Western Gull (Larus occidentalis), and five burrow-nesting species: Ainley’s (Hydrobates cheimomnestes), Ashy (H. homochroa) and Townsend’s (H. socorroensis) Storm-Petrels, and Craveri’s (Synthliboramphus craveri) and Guadalupe (S. hypoleucus) Murrelets. The BCPI support between 400,000 and 1.4 million breeding individuals annually. Our results suggest that these islands support healthy and growing populations of seabirds that have shown to be resilient to extreme environmental conditions such as the “Blob”, and that such resilience has been strengthen from conservation and restoration actions such as the eradication of invasive mammals, social attraction techniques and island biosecurity.”