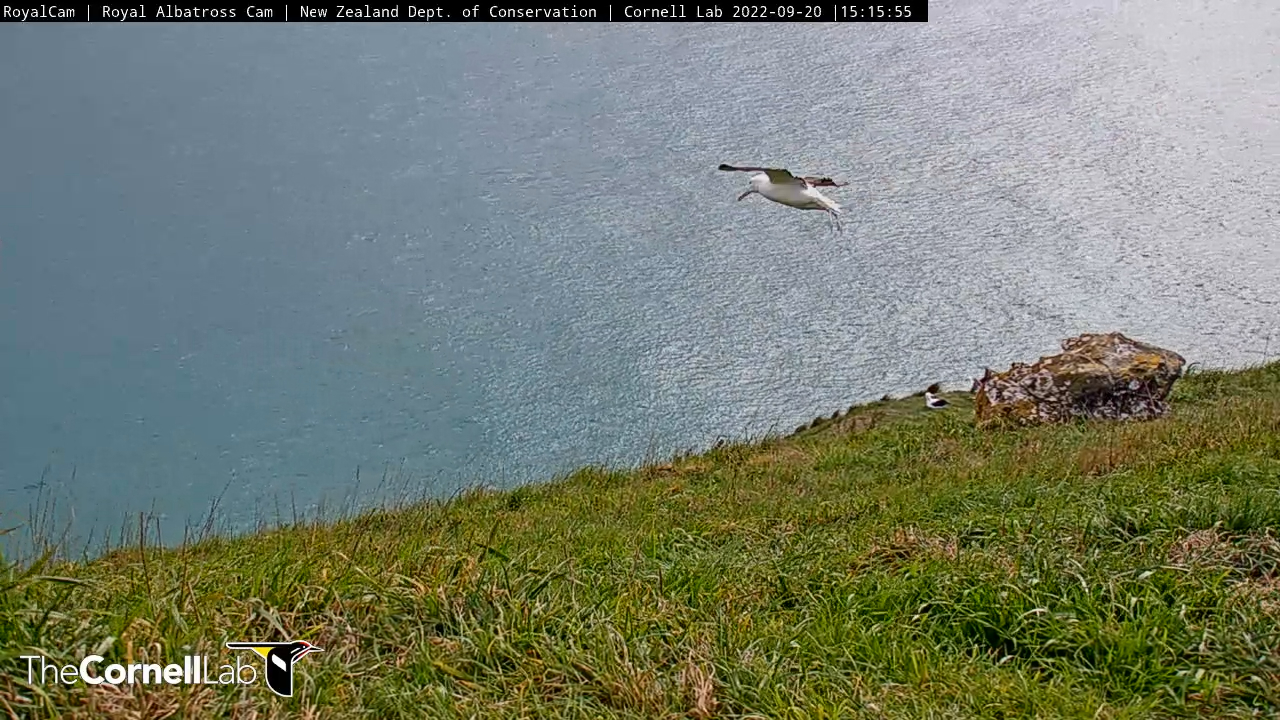 Northern Royal Albatross, OL (Orange/Lime), comes in to land at Taiaroa Head, heralding the new season for the world's only mainland breeding colony; a still photograph taken from RoyalCam

The tradition of ringing in the return of Northern Royal Albatrosses Diomedea sanfordi to Dunedin continued this year with the city’s bells chiming yesterday at 1 pm in celebration. 12-year old female, OL (Orange/Lime) was seen on the headland by Department of Conservation rangers on Tuesday, and spotted flying in from the live stream known as Royalcam.

Otago Peninsula Trust Ecotourism Manager Hoani Langsbury, said there could never be a more appropriate time for the return of a Royal to Pukekura, than the day after Queen Elizabeth’s Tangi. Between 35 - 50 breeding pairs were expected to return this year, Mr Lansbury said in his welcome address to The Royal Albatross' bell-ringing event. He attributed the number to the healthy marine environment surrounding the peninsula, saying, "the peninsula sticks out about 30 kilometres out in the ocean, so we are a little like an offshore island so it’s a good indicator to us how healthy the place is".

Nadia Wesley-Smith, Chair of Te Poari a Pukekura Co-Management Trust Board joined the Royal Albatross Centre in celebrating the return of the first toroa for the season saying the annual return reminded the board of their ongoing responsibilities around the entire living system of the headland that contributes to the health and conservation of the Northern Royal Albatross.

Dunedin’s Northern Royal albatrosses at Taiaroa Head on the Otago Peninsula are the only mainland breeding colony in the world. Birds arrive in September to nest just as the previous year’s chicks, now juveniles, are fledging. Currently 16 out of 25 chicks are yet to fledge. Department of Conservation Ranger Sharyn Broni said OL was spotted spending time with a potential mate last summer and advised only time will tell if OL breeds during the 22/23 season.

Northern Royal Albatrosses are globally Endangered and have been selected as one of ACAP’s featured species for next year’s World Albatross Day, marked on 19 June. ACAP has chosen, “Plastic Pollution” as next year's theme, highlighting the ever increasing presence of plastic in our environment. Albatrosses are affected by a range of pollutants, of which plastics, whether ingested and then fed to chicks or causing entanglements, are certainly the most visible and well known to the general public.  However, albatrosses face other significant pollutants, including heavy metals, (such as mercury) and POPs (persistent organic pollutants, such as insecticides).  ACAP will therefore include these and other categories of pollutants along with plastics in promoting “WAD2023”.

Royalcam is a collaboration between the Department of Conservation and the Cornell Lab of Ornithology to raise awareness world-wide of the lives and challenges of the royal albatrosses.