Featuring ACAP-listed species and their photographers: the White-capped Albatross by Graham Parker 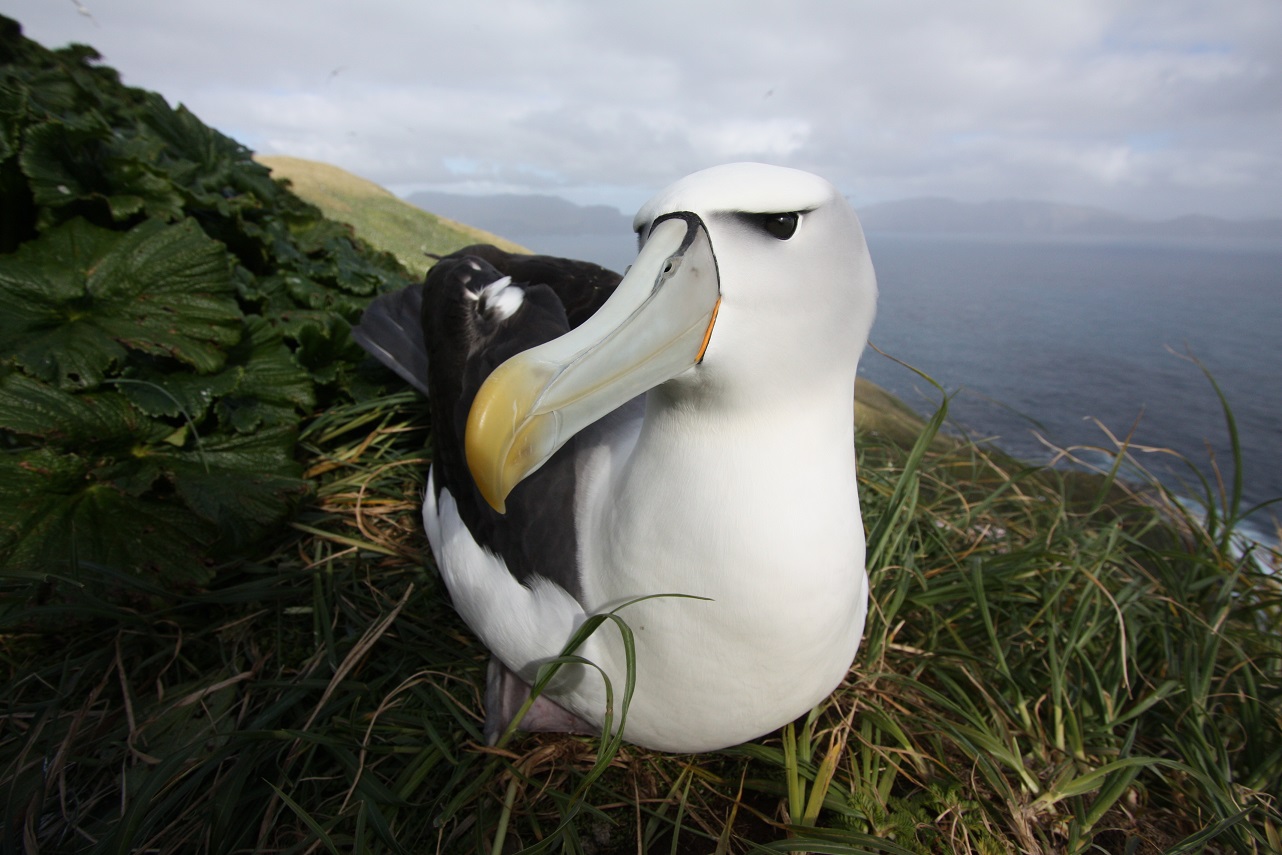 A White-capped Albatross on its nest on Disappointment Island

NOTE:  This post continues an occasional series of photo essays that features photographs of the 31 ACAP-listed species, along with information from and about their photographers.  Here Graham Parker of the environmental consultancy Parker Conservation writes about the field work he has conducted on the globally Near Threatened and nationally Declining White-capped Albatross Thalassarche steadi on New Zealand’s sub-Antarctic Auckland Islands.  Access accounts for all the species covered so far in the series in the Photo Essays section on this website. 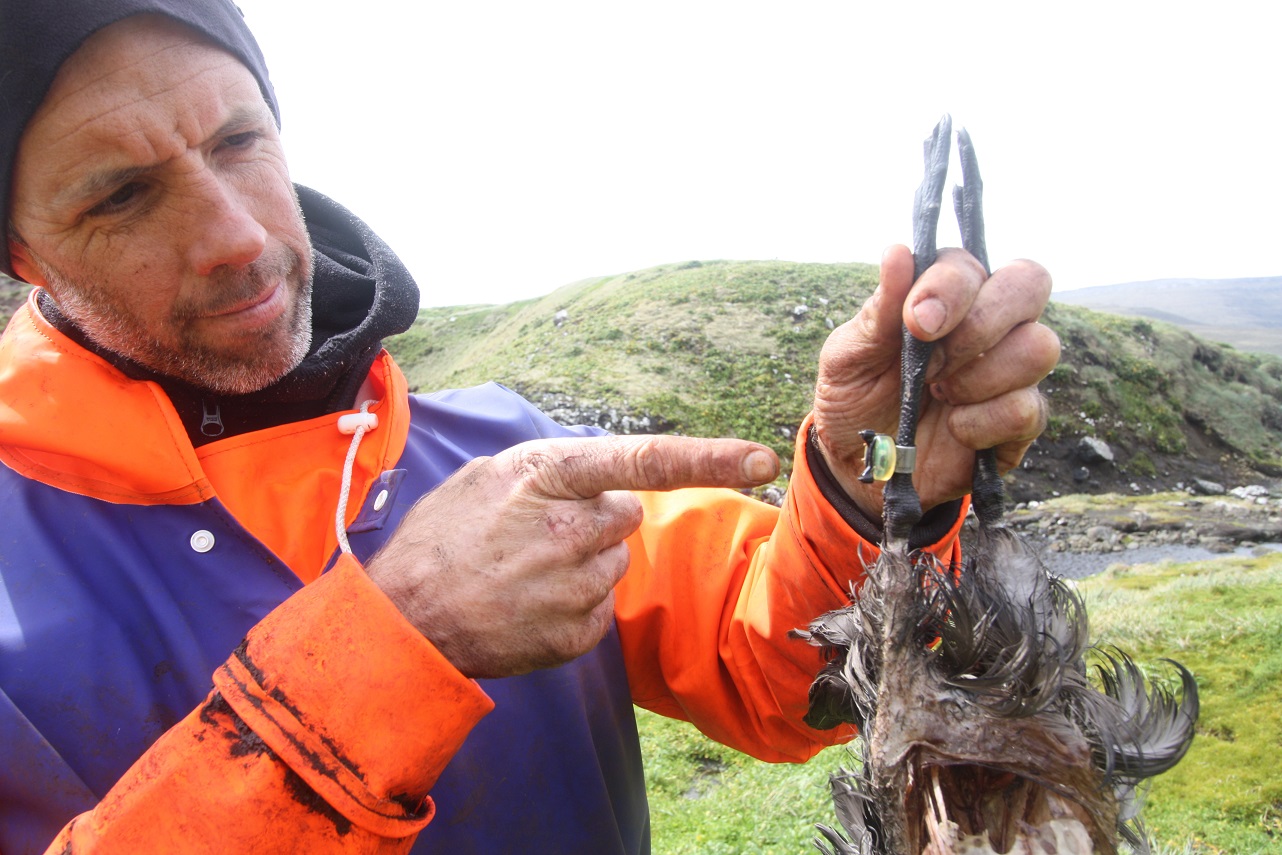 Graham Parker with a tagged White-chinned Petrel corpse killed by a skua on Adams Island, photograph by Kalinka Rexer-Huber

Long before I became an wildlife biologist with a strong interest in seabirds, I worked as a commercial fisher.  Whilst fishing I experienced firsthand the impact fishing gear can have on wildlife through incidental capture in nets and lines.  As is well recognised, wildlife interacting with fishing gear frequently results in mortality to the animals involved.  I never worked with any fishers that took this for granted, but equally it was frequently accepted as just part of fishing.  In my later twenties I went to university as a mature student, having left school at a young age some 12 years earlier.  I was interested in pursuing studies in wildlife management and applying my education and life experience to areas where wildlife interacts with natural resource extraction, in part due to my experience as a fisher.  I now run a small family business called Parker Conservation with my wife, Kalinka Rexer-Huber and brother, Kevin Parker, where much of my work focuses on wildlife interactions with commercial fisheries, plantation forestry and farming. 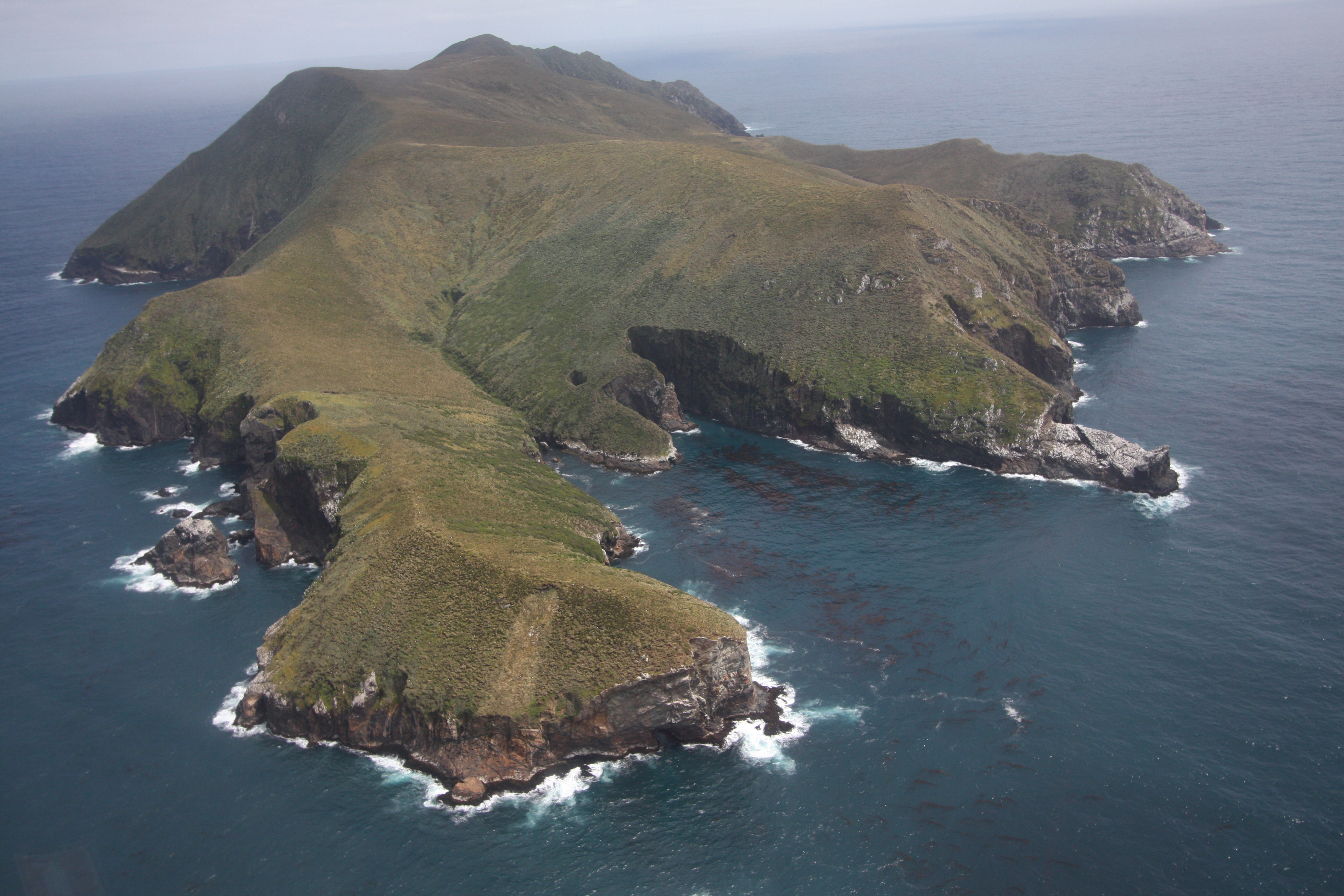 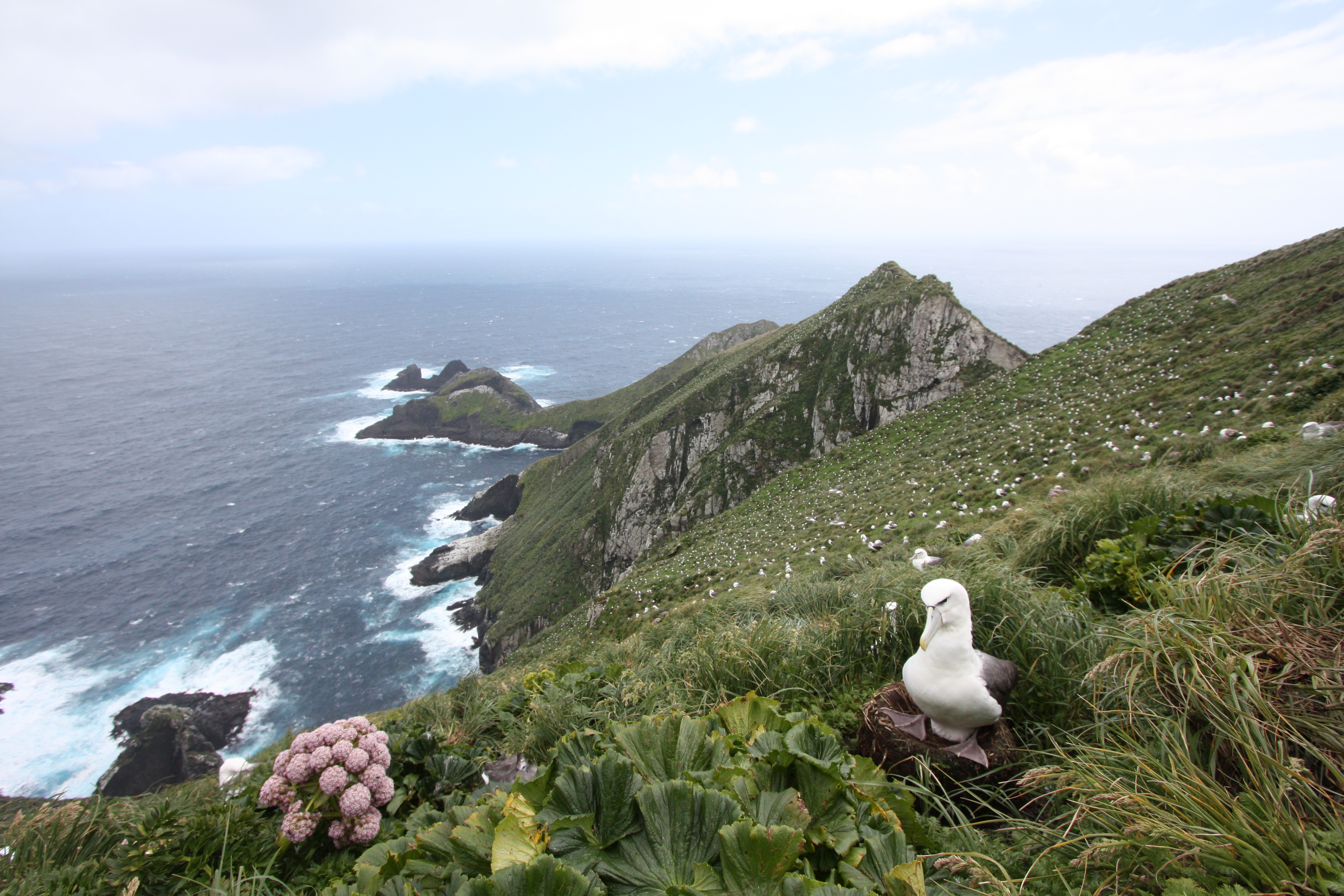 A White-capped Albatross breeding colony among megaherbs on Disappointment Island

I have had the privilege of working on the conservation of White-capped Albatrosses over the past eight years.  My work with this species has been two-sided.  Firstly, working with Igor Debski of New Zealand’s Department of Conservation (DOC) and Paul Sagar and David Thompson of NIWA, Kalinka and I have been collecting population and phenological data for the species.  We established a leg-banded population of White-capped Albatrosses on Disappointment Island to allow survival rates and the breeding population size for the species to be estimated over time.  Estimating survival rates and population trends through repeated breeding population estimates are critical to understand the degree of management required for the species and the impact of incidental bycatch in commercial fisheries.  In addition we have deployed GLS tracking devices on breeding birds to understand their spatial and temporal use of the marine environment.  Lastly, trail cameras taking time-lapse photos for a year, have allowed us to describe basic phenology that was previously not known with any confidence. 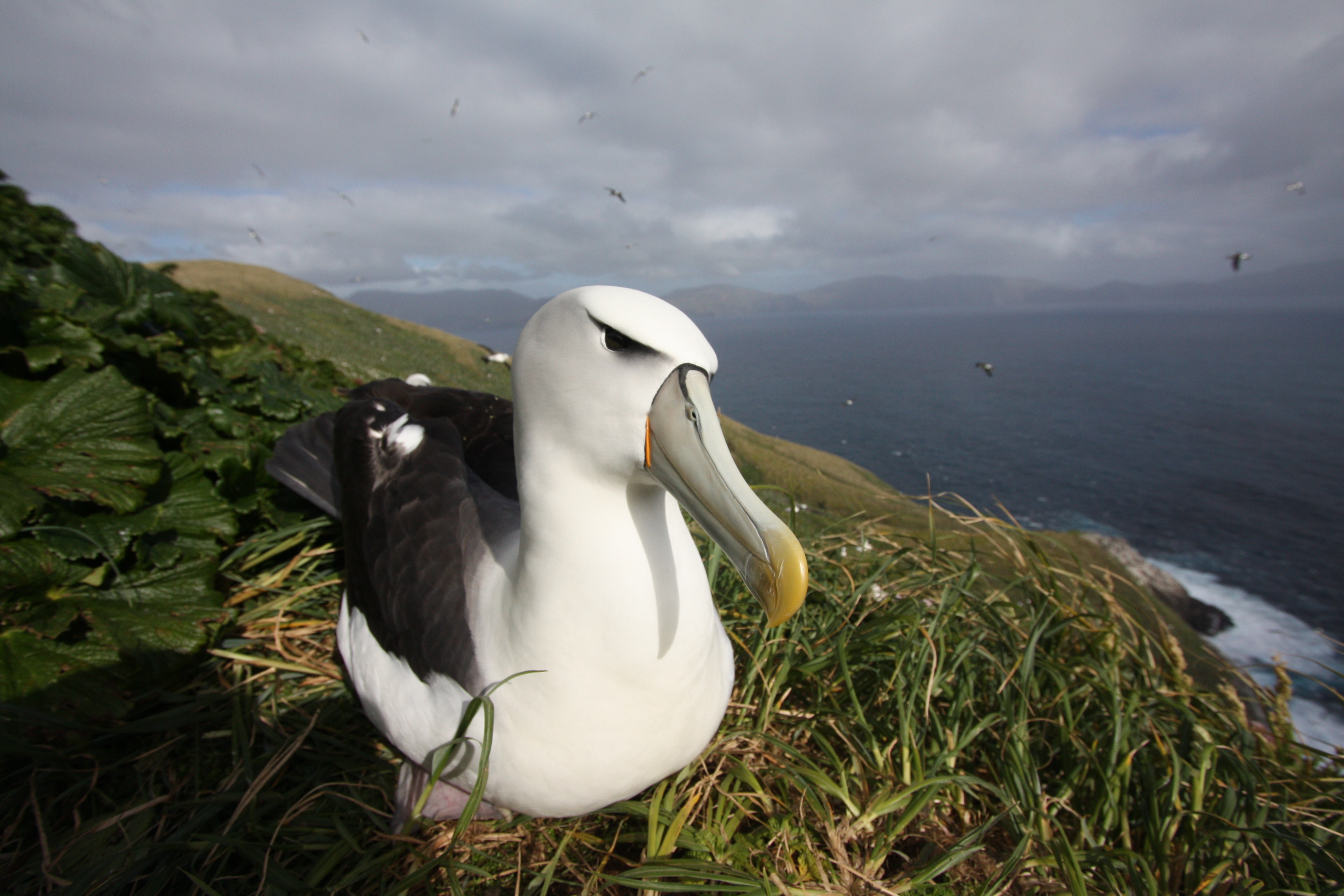 A White-capped Albatross on its nest on Disappointment Island

The second side of my work with White-capped Albatrosses is reducing the bycatch of the species in inshore commercial trawl and bottom longline fisheries in southern New Zealand.  Many of New Zealand’s inshore fisheries are very poorly observed, yet we know White-capped Albatrosses interact with bottom (demersal) surface (pelagic) and trawl fisheries throughout New Zealand’s entire EEZ.  Through a DOC Liaison Programme I work with inshore fishers to refine their fishing gear and practices to mitigate interactions with protected species such as seabirds and marine mammals.  Mitigation of protected species captures in inshore trawl fisheries is entirely voluntary in New Zealand.  Because White-capped Albatrosses exploit foraging opportunities as these vessels discard non-commercial fish species and fisheries waste they are at risk of trawl warp strike and net capture.  Likewise, the species is also vulnerable to capture on longline hooks.  Educating fishers about why albatross species like the White-capped are so vulnerable to population declines as a result of capture in commercial fisheries is an important part of my work. 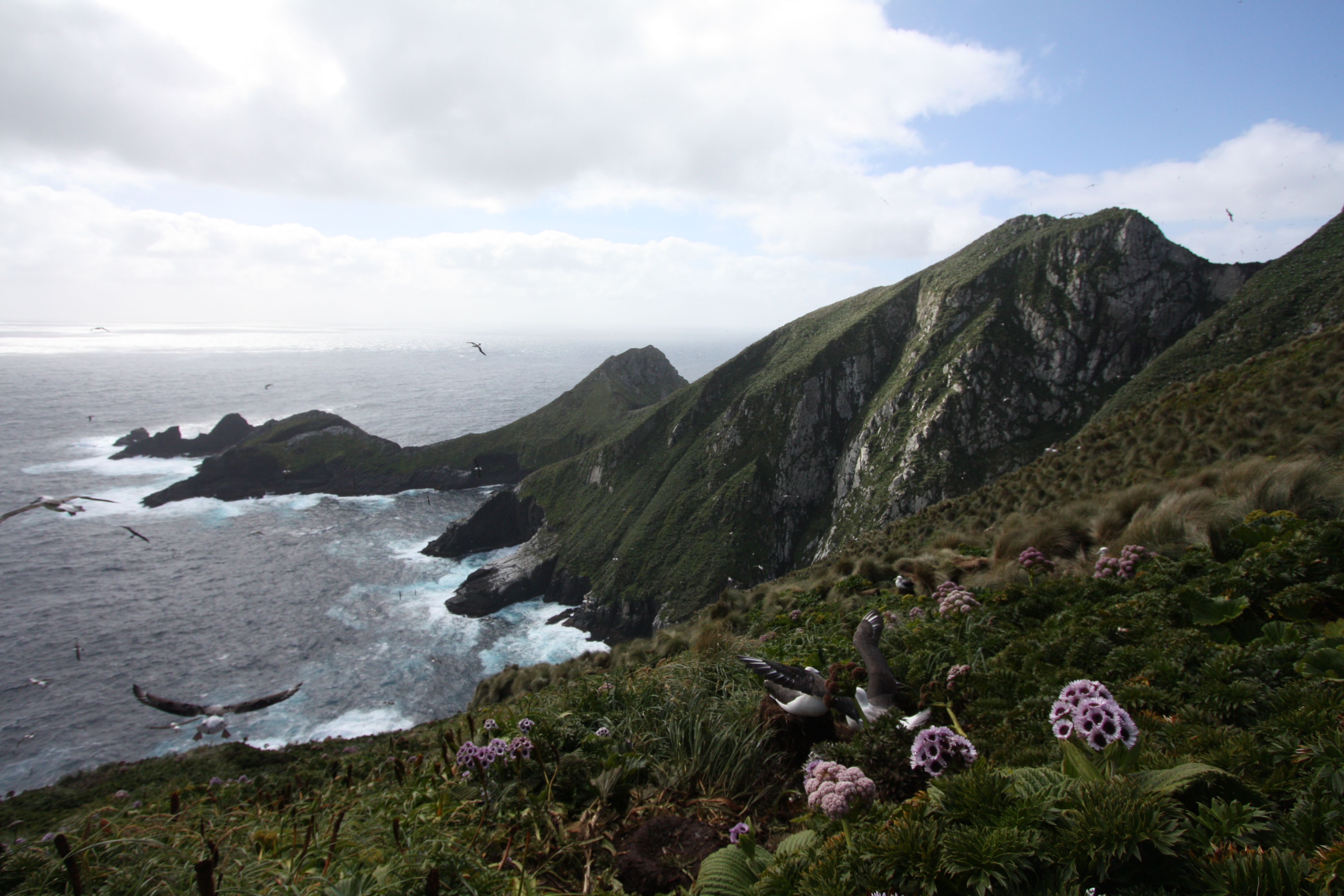 It is a huge privilege to be able to spend time at seabird breeding colonies collecting data vital for conservation management.  Disappointment Island is one of the most spectacular seabird breeding colonies I have worked on.  There are some 100 000 breeding pairs of White-capped Albatrosses on a c. 380-hectare island. The island is also home to numerous other seabirds, so many that when Kalinka and I work on the island we use earplugs to sleep at night.  New Zealand or Hooker’s Sea Lions Phocarctos hookeri commonlyander through the nesting White-capped Albatrosses, as do New Zealand Fur Seals Arctocephalus forsteri on the coast.  The Gibson’s subspecies of the Antipodean Diomedea antipodensis gibsoni and Light-mantled Phoebetria palpebrata Albatrosses also call the island home.  Whilst I relish time spent on these wildlife packed islands, I also feel good when leaving them as they are not really for humans.  Our presence, although justified in the short term to collect important data, is disruptive to the locals.  Be that a Yellow-eyed Megadyptes antipodes or an Eastern Rockhopper Penguin Eudyptes filholi returning from a day’s fishing, a White-chinned Petrel Procellaria aequinoctialis displaying on a wet tussock at dusk, or an Antarctic Prion Pachyptila desolata disturbed by my headlamp as I make dinner after a long day in the White-capped Albatross colony. 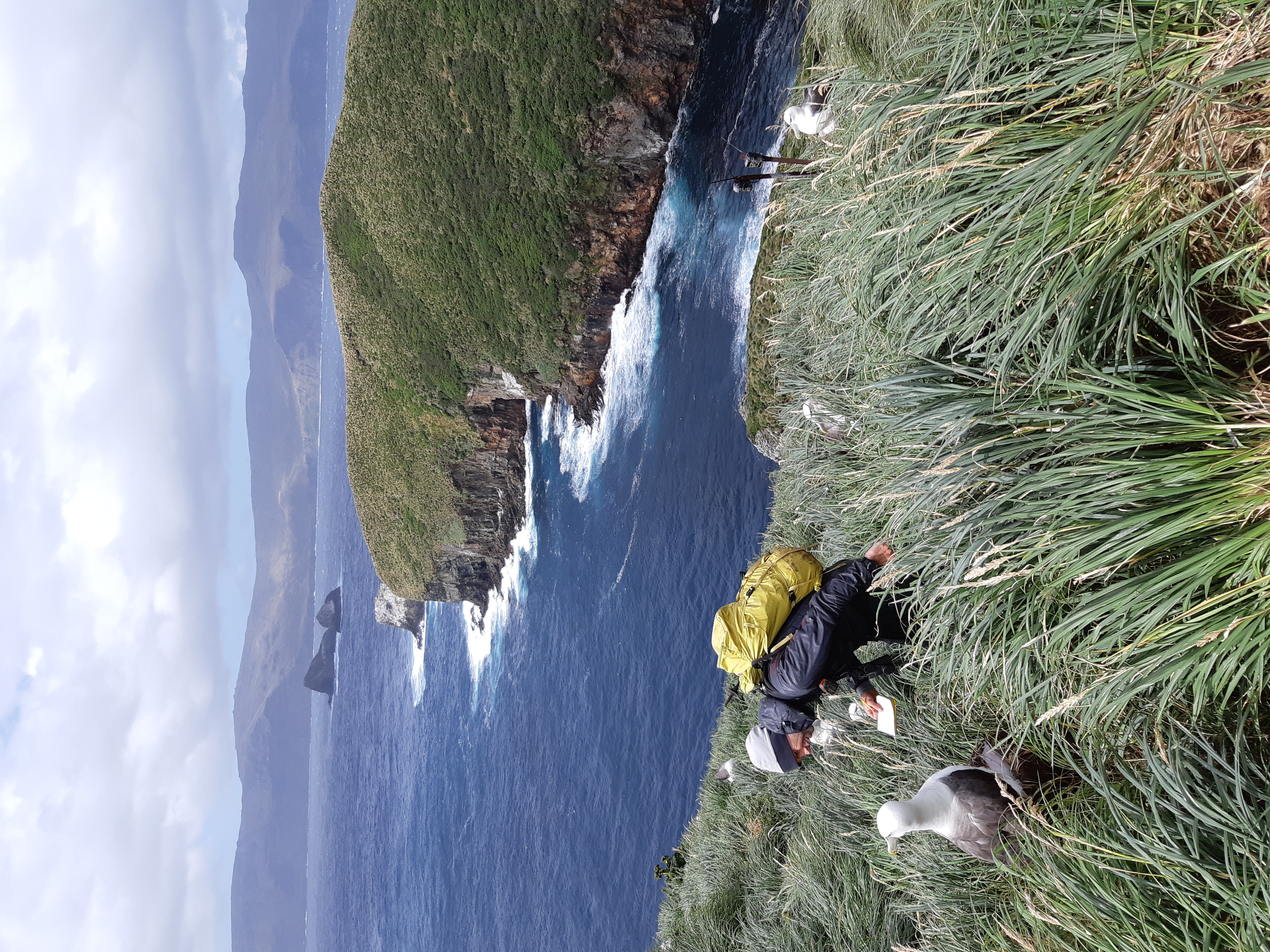