Albatrosses and petrels can accumulate chemicals from ingested plastics 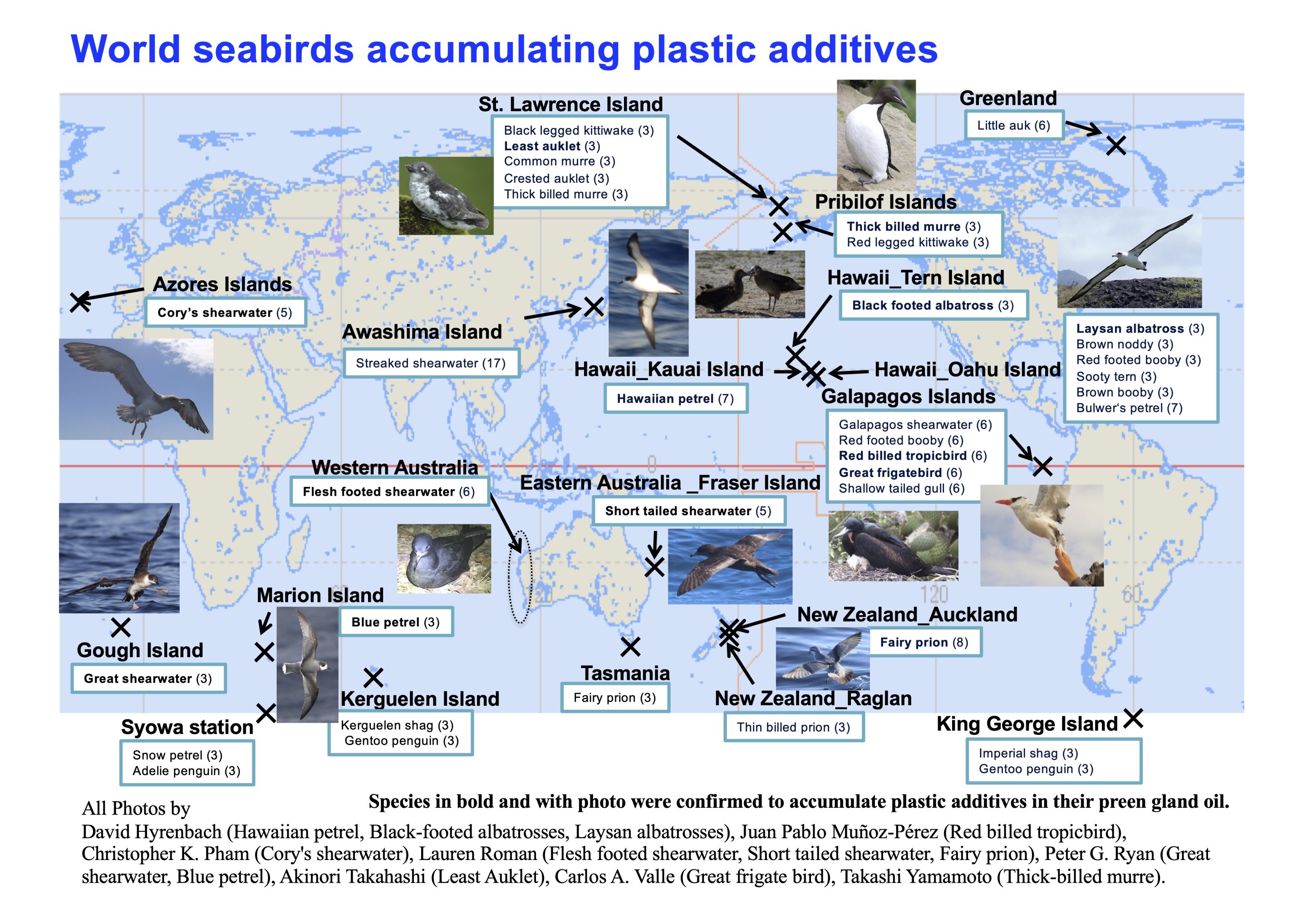 Figure from the publication

Rei Yamashita (Laboratory of Organic Geochemistry, Tokyo University of Agriculture and Technology, Japan) and colleagues have published open access in the journal Environmental Monitoring and Contaminants Research on the levels of pollutants in preen gland oil of albatrosses, petrels, shearwaters and other seabirds.

“Plastic pollution, and its associated impacts on marine fauna due to chemical contamination, is an area of growing global concern. We analyzed 145 preen gland oil samples from 32 seabird species belonging to 8 families with different foraging habits and life history strategies from around the world for plastic additives and legacy persistent organic pollutants. The additives included two brominated flame retardants (decabromodiphenyl ether, BDE209; decabromo diphenyl ethane, DBDPE) and six benzotriazole UV stabilizers (BUVSs; UVP, UV326, UV329, UV328, UV327, and UV234). Polychlorinated biphenyls (PCBs) and organochlorine pesticides (Dichlorodiphenyltrichloroethane and its metabolites: DDTs and hexachlorocyclohexane: HCHs) were detected ubiquitously. High concentrations of PCBs (up to 20,000 ng/g-lipid) were observed in the seabirds from higher-trophic level taxa. These patterns can be attributed to PCB exposure via their diet and associated biomagnification. DDT concentrations showed strong positive correlations with PCB concentrations, suggesting that DDTs in seabirds are also a result of diet and biomagnification. Plastic additives were detected sporadically as BDE209 and DBDPE were detected in 16 seabirds from 10 species (range: 3–379 ng/g-lipid) and BUVSs were detected in 46% (67) of the examined individuals (range: 2–7,055 ng/g-lipid). UV stabilizers were more frequently detected than flame retardants because UV stabilizers are more widely applied to plastic products. None of the plastic additives were correlated to the presence of PCBs, nor were they explained by the foraging area or trophic level. High concentrations of additives were detected in the species with high levels of plastic in their digestive tracts. In some of these species, such as Hawaiian petrels (Pterodroma sandwichensis) from Hawaii and flesh-footed shearwaters (Ardenna carneipes) from Western Australia, plastics were directly observed in the stomach. For other species, including great shearwaters (Ardenna gravis) from Gough Island, blue petrels (Halobaena caerulea) from Marion Island, and black-footed and Laysan albatrosses (Phoebastria nigripes and P. immutabilis) from Hawaii, plastic ingestion has been documented in literature. These patterns can be explained if the additives are mainly from ingested plastics rather than diet. The detection of BFRs and BUVSs demonstrated that a significant proportion of the examined seabirds accumulated chemicals from ingested plastics.”