Featuring ACAP-listed species and their photographers: the Westland Petrel by Kerry-Jayne Wilson 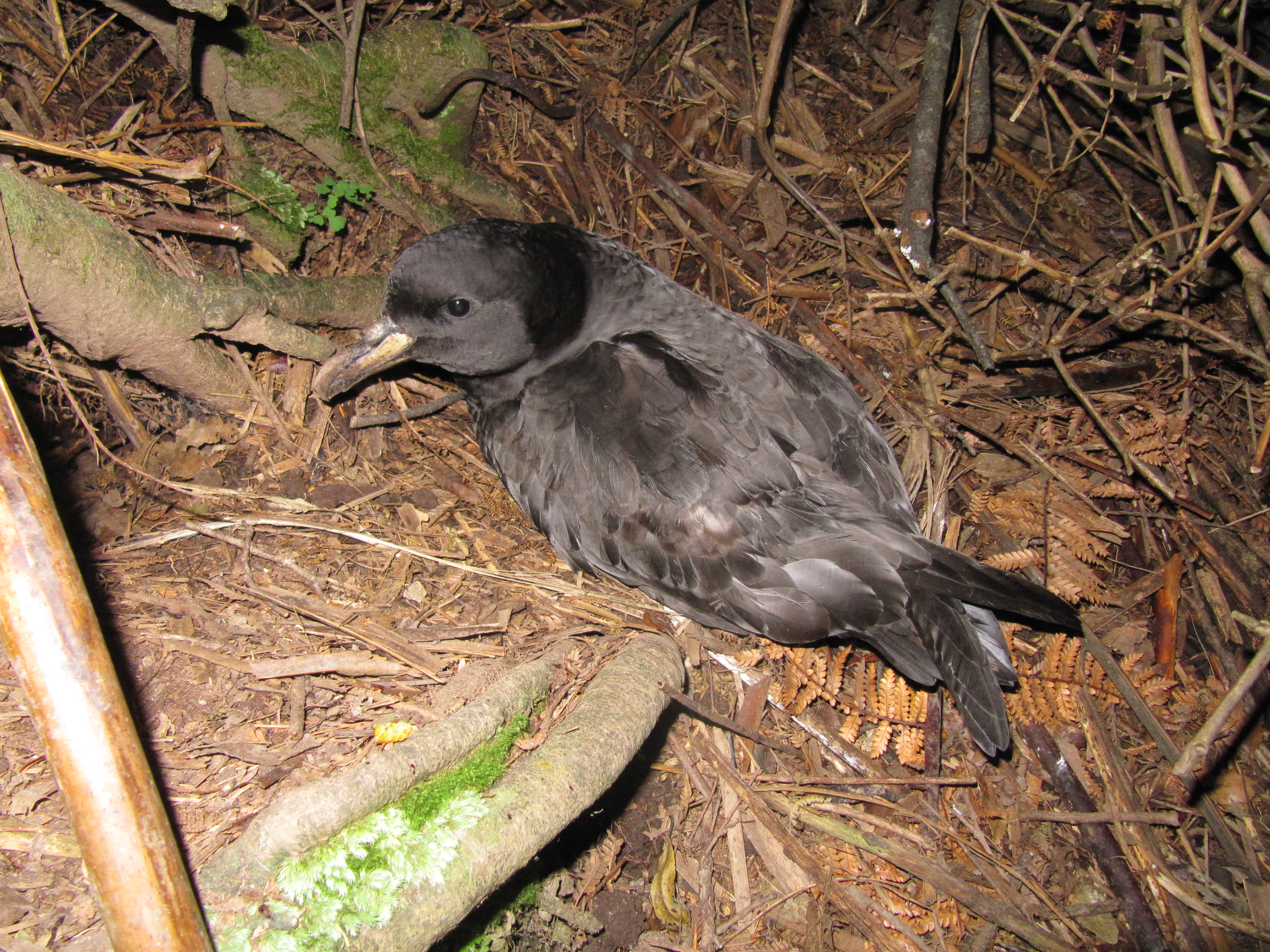 A Westland Petrel in the breeding colony

NOTE:  This post continues an occasional series that features photographs of the 31 ACAP-listed species, along with information from and about their photographers.  Here, Kerry-Jayne Wilson MNZM* of the West Coast Penguin Trust features the globally Endangered and nationally Naturally Uncommon Westland Petrel or Tāiko Procellaria westlandica, endemic to New Zealand.  Because of the difficulty of photographing the bird at night in its densely forested breeding sites, photographs taken by Kerry-Jayne’s colleagues are included.

* Member of the New Zealand Order of Merit (click here). 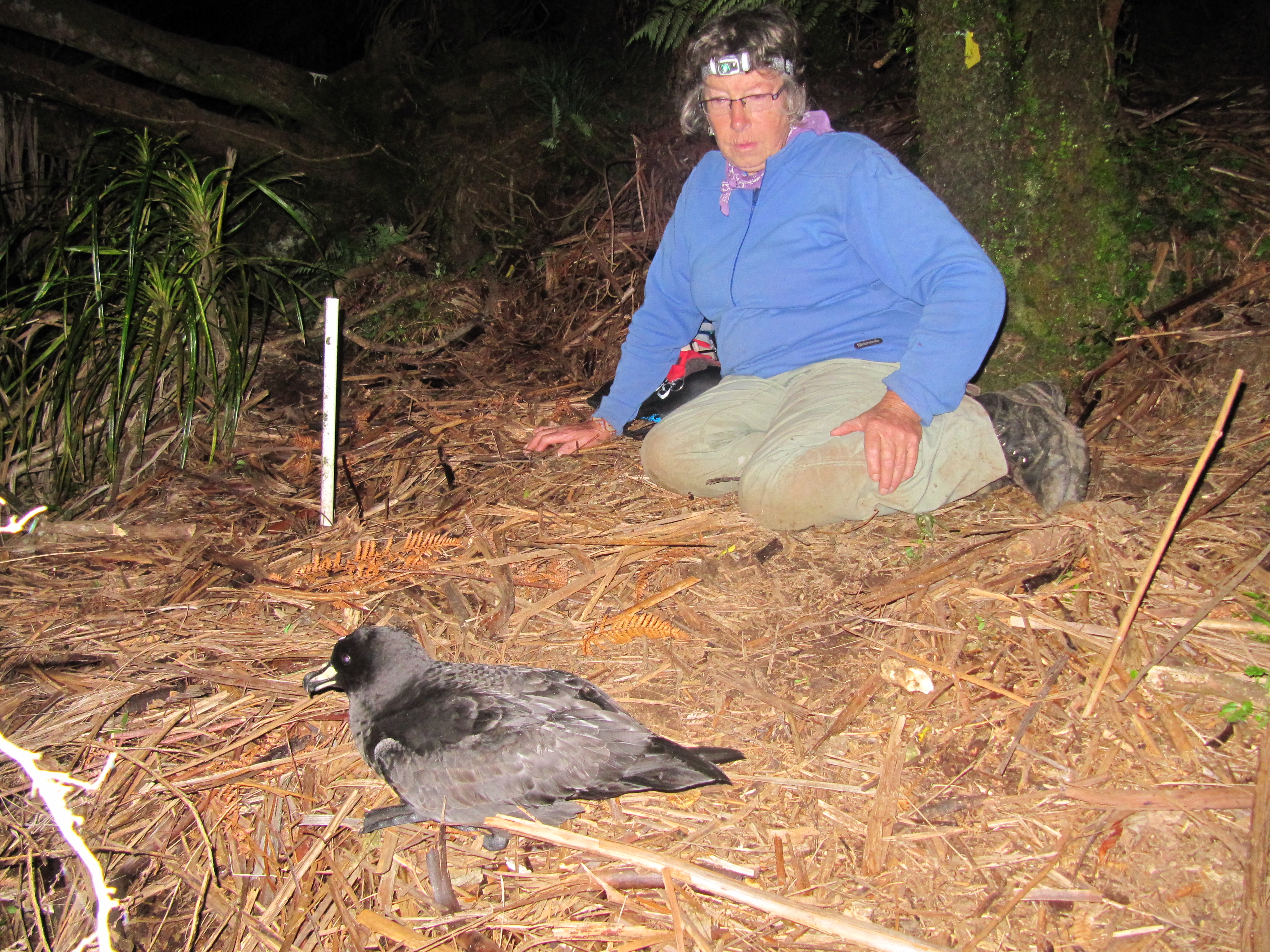 Kerry-Jayne Wilson with a Westland Petrel, photograph by Susan Waugh

The Westland Petrel (Māori name Tāiko) only nests in mixed podocarp forest in the foothills of the Paparoa Mountains a few kilometres south of the tourist town of Punakaiki on the west coast of New Zealand’s South Island.  It is considered the tenth most threatened seabird by fisheries in New Zealand waters - and that is just one of many threats facing the species. 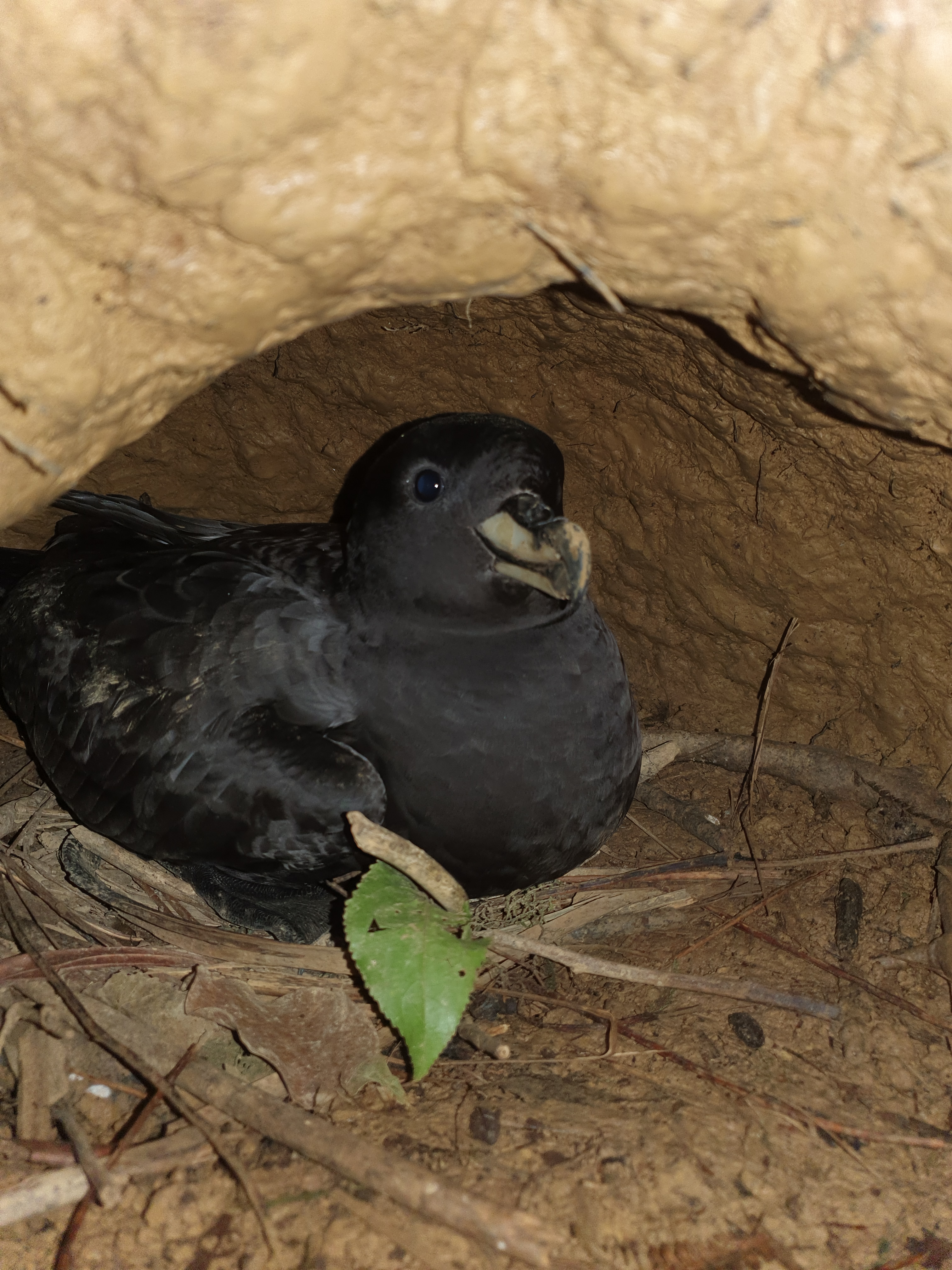 An adult Westland Petrel inside its burrow, photograph by Kate Simister

The all-black petrel was only brought to the attention of scientists in 1945 when Bob Falla (later Sir Robert Falla KBE CMG, 1901-1979) gave a talk on muttonbirding on national radio.  He told of the muttonbirders heading to the breeding islands in April and May.  The children of the tiny, rural Barrytown School told their teacher that Falla must be wrong because their dads go muttonbirding (illegally) in November.  They wrote to Falla, who not knowing of a petrel that would fledge young in November, investigated and ‘discovered’ and then named the Westland Petrel. 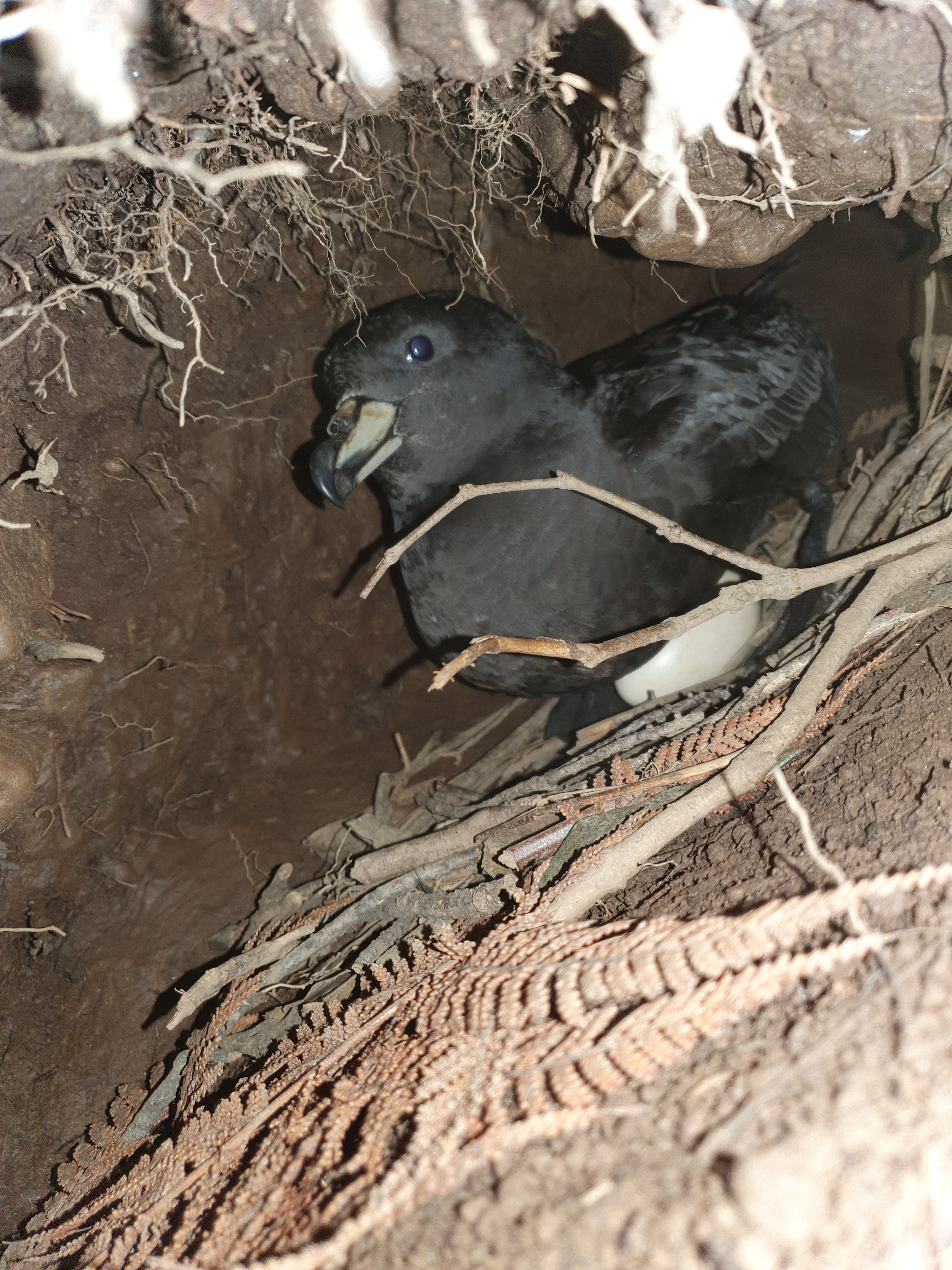 A Westland Petrel guards its egg, photograph by Kate Simister

The Westland Petrel came to my own attention in the 1970s when I went caving at Punakaiki.  At the time a mining company had established their plant directly beneath the main flyway used by the petrels when traversing between sea and colony.  They were prospecting for gold, titanium and other minerals in the adjacent Barrytown Flats and if economic the brightly lit processing plant would have operated 24 hours a day.  Sandy Bartle, then a curator at the then national Museum of New Zealand, was researching the petrels and began a one-person campaign to raise awareness and protect the birds.  As more people came on board the dispute continued for decades until eventually the company gave up plans to mine and gifted the land and disused buildings to the Department of Conservation. 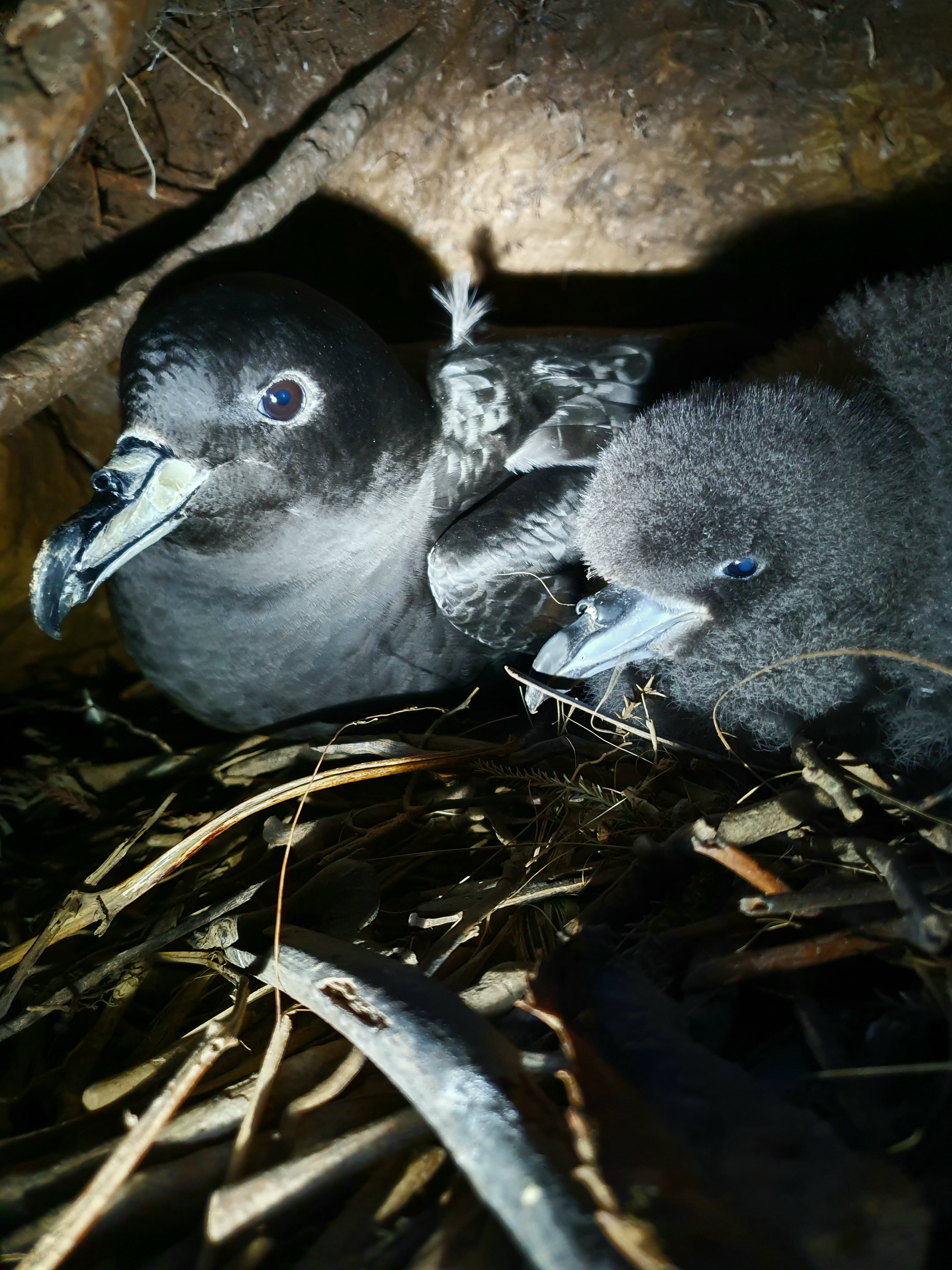 A female Westland Petrel with its month-old chick, photograph by Kate Simister

The annual banding begun by Sandy in the 1970s continues; like a relay the baton handed from person to person.  In 1995 my student Amanda Freeman began her PhD thesis on the petrels.  This was my chance to get involved with a species that had interested me for 20 years.  Over the next few years we spent some memorable days and nights in the colony.  We became the first people to track something smaller than an albatross at sea.  There were some anxious times when one tracked bird did not return for 14 days.  To our enormous relief we did eventually retrieve the borrowed US$ 5000-unit it was carrying.  The Department of Conservation (DOC) managed the banding until Susan Waugh, then employed at the Museum of New Zealand Te Papa Tongarewa began her demographic studies.  By then I had taken early retirement, living in nearby Charleston.  I took every opportunity to join Sue in the field and filled in for her when work commitments kept her in the office.  During our watch the area was struck by three ex-tropical cyclones, two of which caused extensive treefall and landslides in the petrel colonies.  A third of one study colony was lost to a single landslide, with treefall obliterating part of what remained.  So much for further demographic studies.  Fortunately, the main study colony lost a few trees and some minor landslides around the perimeter, but few birds were killed or nesting burrows lost.  Once Sue Waugh moved on from Te Papa and my aging hips precluded further fieldwork in the steep, tangled rainforest in which they breed the baton was returned to DOC with fieldwork led by a young super-fit, super-keen ranger by the name of Kate Simister.  Under her guidance the annual banding begun by Sandy Bartle in the 1970s continues. 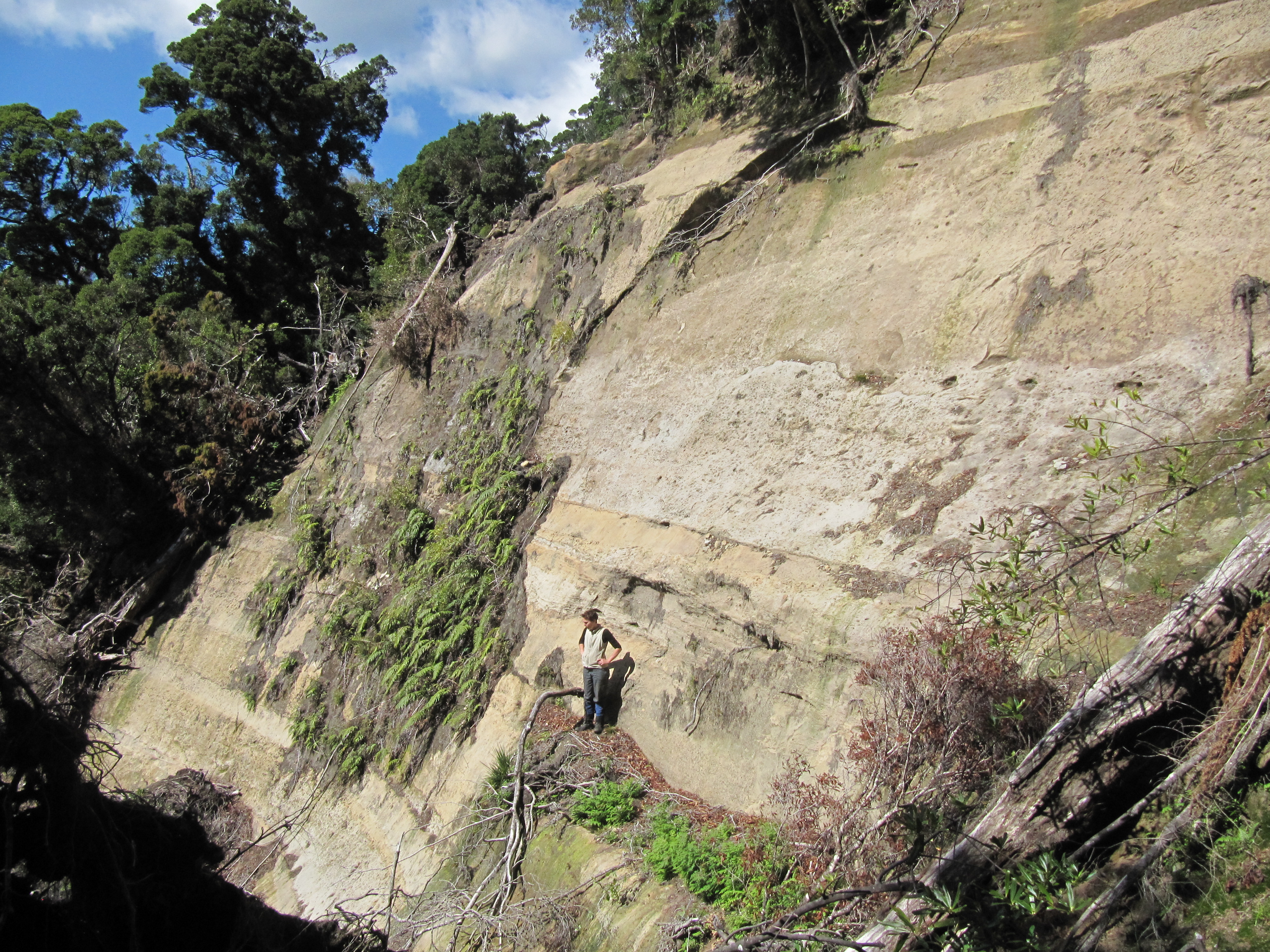 Stripped to bedrock.  A landslide caused by an ex-tropical cyclone; note person for scale 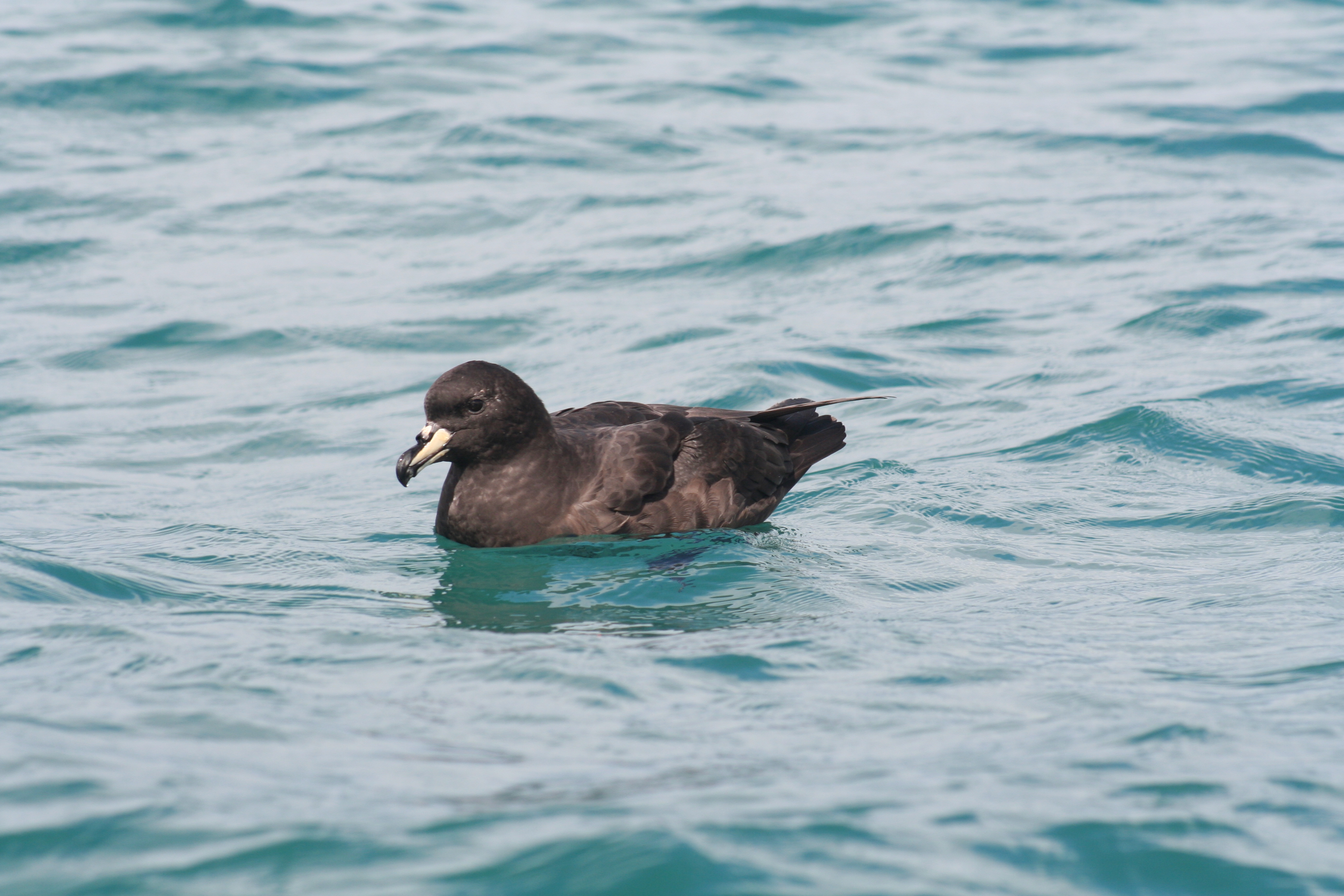 Westland Petrel at sea
Photographs by Kerry-Jayne Wilson, unless stated

In 2015 the annual Taiko Festival began to welcome the Westland Petrels home from their sojourns in South American seas.  The weekend festival begins with a walk down to the beach to wait beneath the flightpath for the birds to fly over at dusk.  While we wait, I give a talk about the birds, describing where they might have been and what they will do once ashore.  The birds have never let us down with several hundred appearing on cue, a sight to remember for the 80 or so people waiting below.  Next day there is a market, tree planting, clowns, and a children’s programme.  Late afternoon the music starts with a succession of bands, over the years attracting some of New Zealand’s biggest acts.  Between bands I take to the stage with another talk about the petrels, this time to hundreds of punters there for the music. 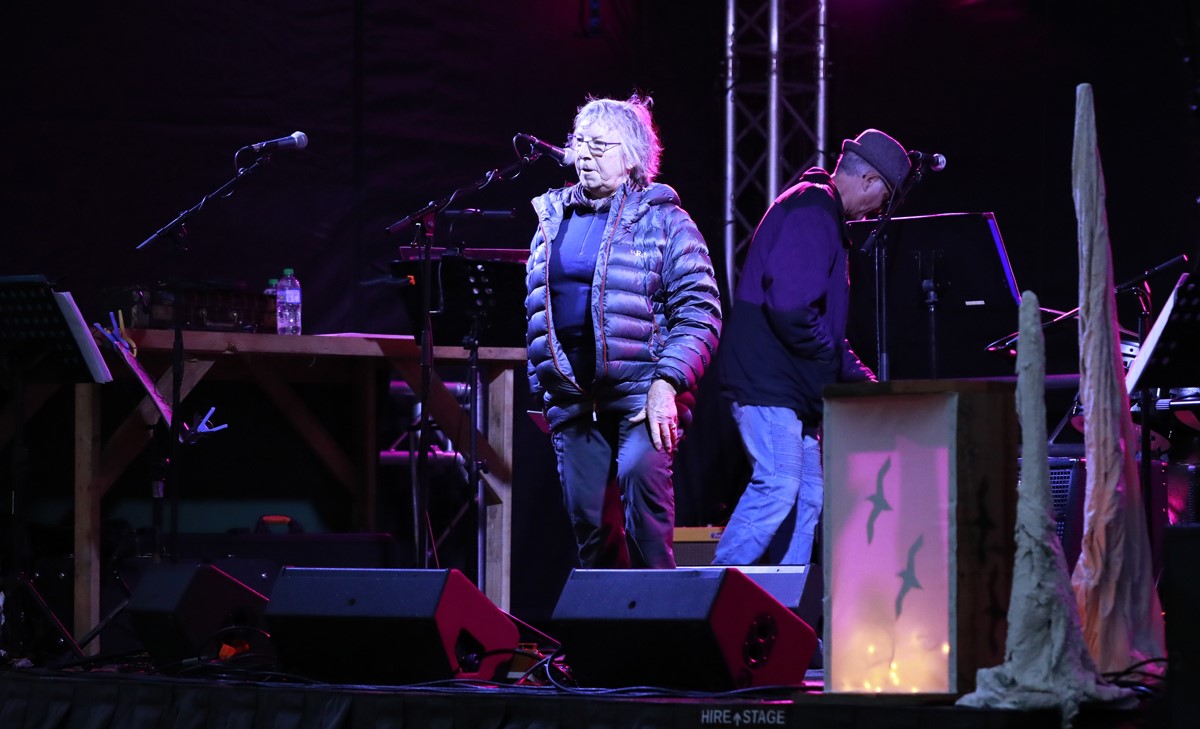 On stage at the Taiko Festival: Kerry-Jayne lectures on Westland Petrels, photograph by Jed Findlay

The Westland Petrel is unique among the 31 ACAP species breeding on the mainland just 2.5 km from a town.  Streetlights and road collisions, dogs, feral pigs and tourism developments pose current or potential threats.  Dogs have entered the colonies from time to time and killed birds, pigs have been released nearby by aspiring hunters but so far they have been killed before reaching the petrels.  Conservation on the colonies relies on the goodwill of locals, including Paparoa Nature Tours and the Westland Petrel Conservation Trust.  Perhaps the Taiko Festival has done more than anything else to raise their profile and engender among the local people respect and guardianship of what many now consider ‘their special birds’.

With thanks to Kate Simister, Ranger, Biodiversity, Department of Conservation for photographs.