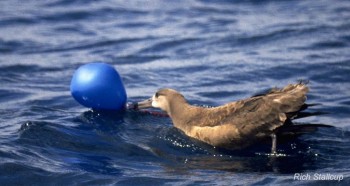 ACAP Latest News has reported on numerous times of albatrosses and petrels ingesting or becoming entangled by helium-filled balloons that had been released in the open air and subsequently returned to earth or sea after bursting (click here).  Unless successfully treated by rehabilitation centres it seems many of the affected birds will have succumbed.   Around the world various NGOs and social media groups have been working assiduously to persuade local, regional or national authorities to ban, or at least limit, the intentional outdoor release of lighter-than-air balloons, with it is fair to say, limited results (for example Balloons Blow and Save Queensland from Balloons).

Significant news then that on 30 June the State of Hawaii banned (as from 1 January 2023, 18 months away) the intentional release of all balloons outside (with the exceptions of hot air, meteorological and research balloons).  “Sea turtles, albatrosses and other marine life that eat squid and jellyfish can mistake balloons in the ocean for food.  This is due to the tentacle like appearance of the plastic ribbons and the balloons which undergo brittle fracture in the air when they burst.  When ingested, balloons become sticky and gooey and are impossible for an animal or bird to move through their digestive system.  Blockages of the gastro-intestinal tract caused by balloons leads the animal or bird to starve to death.  The plastic ribbons attached to balloons are also a danger as they can cause injury or death to marine life that become entangled in them or ingest them” (click here).

It remains to be seen whether Hawaii’s lead will be copied by other states in the USA, or in other parts of the world where balloons have been reported leading to the death of albatrosses and petrels.  However, it seems the pressure groups will continue to work towards more bans.