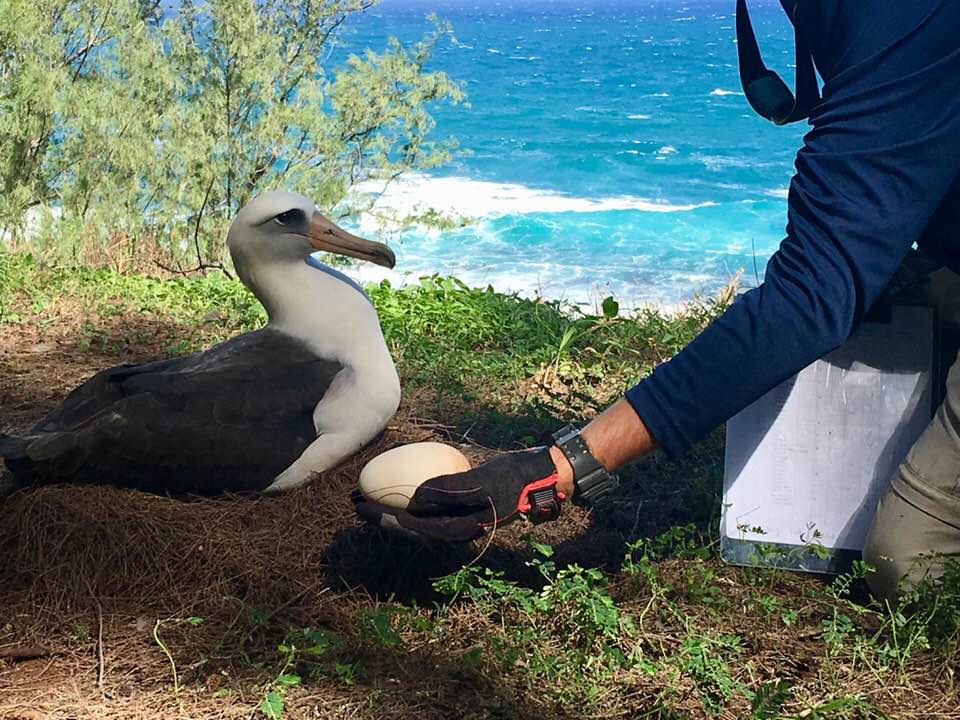 Activities directed at improving the conservation status of the Near Threatened Laysan Albatross Phoebastria immutabilis in the USA’s Hawaiian Islands have included working towards eradicating predatory House Mice on Midway Atoll, predator-proof fencing an existing breeding colony and attempting to create a new colony safe from predicted sea-level rise on Oahu and giving fertile eggs to female-female pairs to incubate and rear the ensuing chicks as their own on Kauai.  The conservation work with Kauai’s Laysan Albatrosses has now been recognized with an award, as described below.

“The U.S. Department of Agriculture’s Animal and Plant Health Inspection Service (APHIS) received this year’s Presidential Migratory Bird Federal Stewardship Award, in recognition of the Wildlife Services program’s efforts to conserve large native migratory birds and protect people in Hawaii.  APHIS Wildlife Services conducted a joint research-operational project with the goal of reducing human-wildlife conflicts associated with two bird species of cultural significance: the Hawaiian goose, or nēnē, and the Laysan albatross, or mōlī.  Because of their large size, both species pose a potential aircraft strike risk near airfields in some areas of Hawaii.  Wildlife Services research and operations personnel collaborated with numerous partners not only to reduce aircraft strike hazards presented by these species, but also to identify, preserve, enhance, and support important breeding and foraging habitats for the birds elsewhere on the island. The project employed innovative nonlethal management tools, such as canine teams for dispersing birds, mitigation translocation, and egg swaps, and conducted research to gauge the impact and effectiveness of these tools, which will guide future management strategies.

Laysan albatross, the Pacific region’s second-largest seabird, commonly return to the same site for breeding and nesting year after year.  Since the 1970s, nesting Laysan albatross have frequented a naval airfield on the island of Kauai, creating hazardous conditions for both birds and military aviators.  The U.S. Navy’s Pacific Missile Range Facility (PMRF) began partnering in the 1980s with Wildlife Services to reduce wildlife hazards at the facility including the relocation of adult Laysan albatrosses.  Since 2009, Wildlife Services has collected more than 600 albatross eggs, transferring them to conservation partners with expertise in raising eggs to hatching and helping albatross chicks establish nesting colonies in more suitable habitats.  The partners hoped that the fledged albatross chicks eventually would return to the adopted nesting site. In 2018, the first albatross, which had hatched at an egg swap location, returned to its adopted site after three years traveling around the Pacific Ocean. Wildlife Services research efforts began in 2018 and use radio-tracking technologies to determine the most effective methods for reducing albatross presence on the PMRF and increasing aviation safety. Research findings provide evidence that mitigation translocation within island ecosystems can benefit both humans and birds.”

Among the many co-applicants named in the award nomination ae two NGOs, Kauai Albatross Network and Pacific Rim Conservation, that over the years, have continued to support ACAP in its efforts to increase awareness of the conservation needs of albatrosses, especially the Laysan. “Mahalo” to them both.