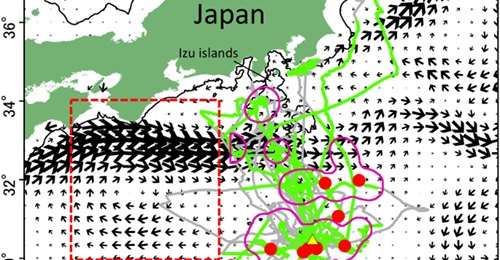 Distribution of marine floating debris (red circles) encountered by Black-footed Albatrosses at sea in relation to their foraging area (purple lines):  GPS tracks of 23 foraging trips made by 13 birds from Torishima (yellow triangle) are shown by grey lines, with green sections symbolizing when video records were available. Black arrows show surface ocean currents (from the publication)

“Anthropogenic marine debris is a threat to marine organisms. Understanding how this debris spatially distributes at sea and may become associated with marine wildlife are key steps to tackle this current issue. Using bird-borne GPS- and video-loggers on 13 black-footed albatrosses Phoebastria nigripes breeding in Torishima, Japan, we examined the distribution of large floating debris in the Kuroshio Current area, western North Pacific. A total of 16 floating debris, including styrofoam (n = 4), plastic pieces (n = 3), plastic sheet (n = 1), fishery-related items (rope or netting, n = 4), and unidentified debris (n = 4), were recorded across the 9003 km covered by nine birds. The debris was concentrated in the southern area of the Kuroshio Current, where the surface current was weak, and the albatrosses were foraging. The albatrosses displayed changes in flight direction towards the debris when at a mean distance of 4.9 km, similarly to when approaching prey, and one bird was observed pecking at a plastic sheet; indicating that albatrosses actively interacted with the debris. This paper shows the usefulness of studying wide-ranging marine predators through the use of combined biologging tools, and highlights areas with increased risk of debris exposure and behavioral responses to debris items.”