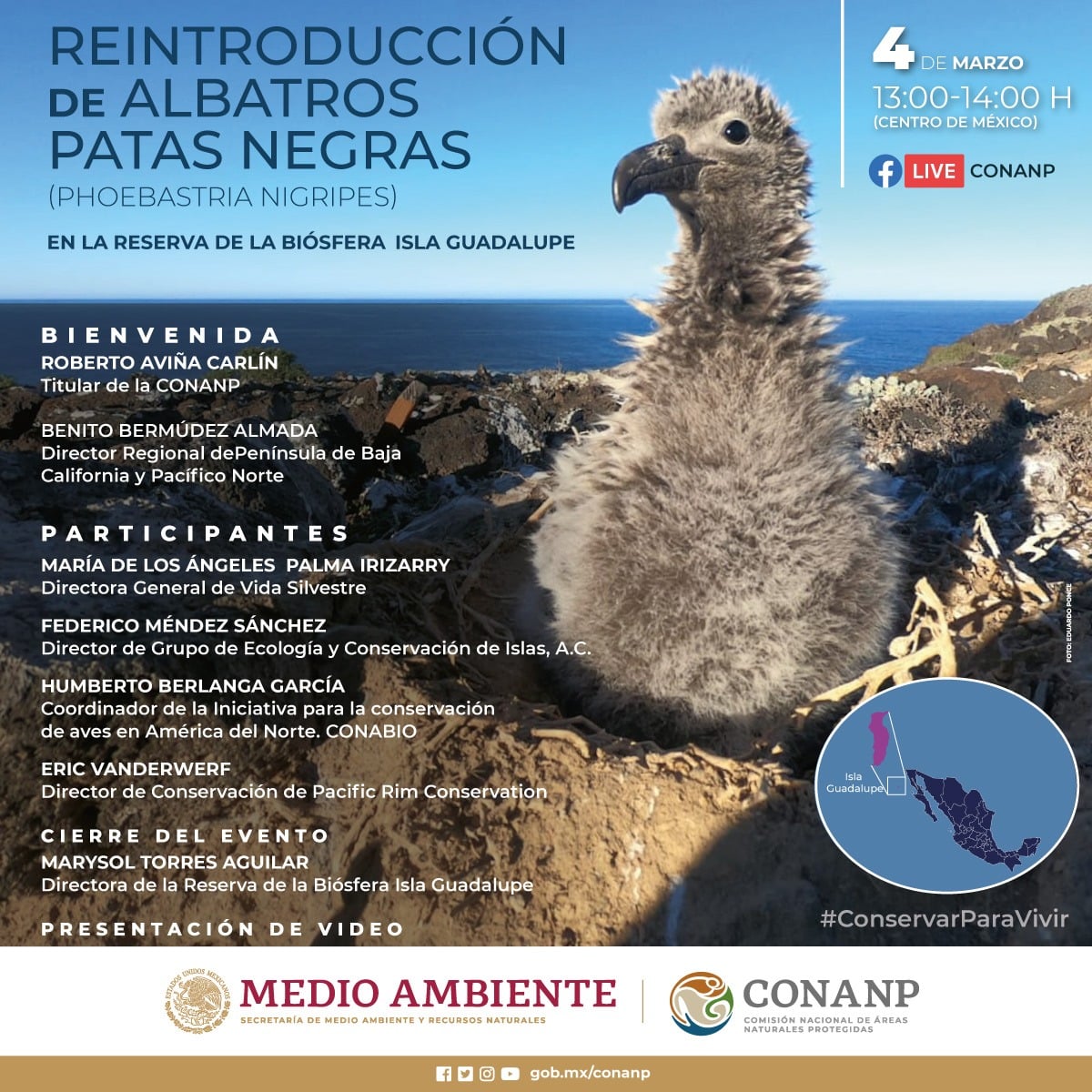 A long-term conservation project: “Reintroduction of Black-footed Albatrosses (Phoebastria nigripes) from Midway Atoll National Refuge, USA to Guadalupe Island Biosphere Reserve, Mexico” has been initiated by the United States Fish & Wildlife Service (USFWS) and Pacific Rim Conservation (PRC), together with Mexico’s Comisión Nacional de Áreas Naturales Protegidas (CONANP) and the Mexican environmental NGO Grupo de Ecología y Conservación de Islas (GECI).  The globally Near Threatened Black-footed Albatross has been reported  breeding in the past (one chick in 1998) on Isla Guadalupe, some 260 km off the west coast of Baja California.  Since 2000 GECI biologists have recorded sightings of individual Black-footed Albatrosses on the island and its islets and many in surrounding waters, but no breeding has been recorded.  Introduced feral cats are now being removed from the island, thus helping the island’s existing populations of Laysan Albatrosses P. immutabilis and other seabirds.  According to GECI's Federico Méndez Sánchez cat eradication is close to completion; good news for all the island's seabirds, including  reintroduced Black-footed Albatrosses. 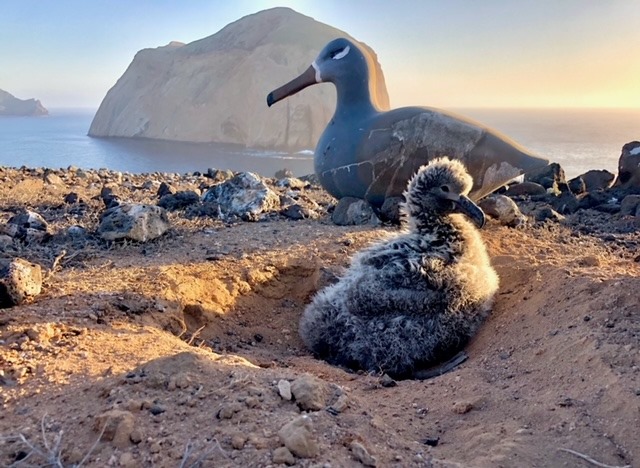 A translocated Black-footed Albatross chick with an adult decoy on Isla Guadalupe, photograph by Robby Kohley

The project has recently produced a media release, parts of which follow describing the translocation activities to date and its plans for the future:

“Reintroduction of the Black-footed Albatross is being carried out through the transfer of eggs and chicks from Midway Atoll National Wildlife Refuge to the Guadalupe Island Biosphere Reserve.  The techniques used in the project are based on the most up-to-date ethical and scientific standards developed and adapted by Pacific Rim Conservation during previous similar projects in the Hawaiian Islands. The Black-footed Albatross eggs will be cross-fostered into Laysan Albatross nests, and the chicks will be hand-raised.  To minimize any impacts to the source population on Midway, the eggs and chicks were collected from nests next to the ocean, where they were at risk of being washed away by high waves." 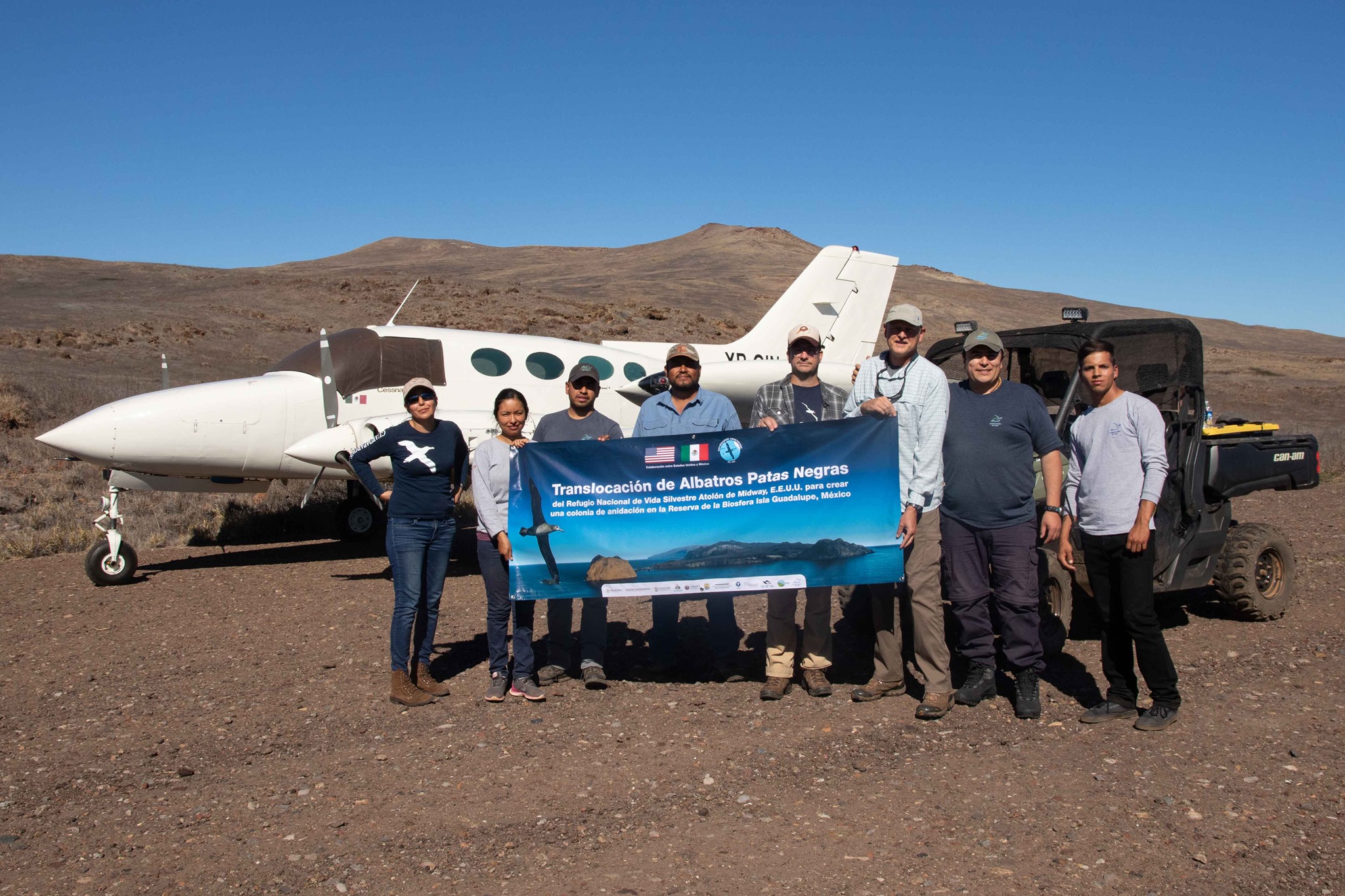 Mexican and USA members of the reintroduction team on Isla Guadalupe

"The first 21 eggs were flown from Midway to Honolulu by the USFWS on 17 January 2021, and then to San Diego, California by PRC. Then, they were imported into Mexico on 18 January and flown to Guadalupe Island by PRC, GECI and CONANP staff.  The eggs were placed in foster nests of Laysan Albatrosses in which the natural egg was infertile.  In early February, 18 of the 21 eggs hatched, representing an 86% hatching success rate, similar to the rate in natural Laysan Albatross nests on Guadalupe and in other inter-island translocation projects in Hawaii by PRC.

On 18 February, nine Black-footed Albatross chicks were imported from Midway and arrived in Mexico and were successfully released on Guadalupe, where they will be raised by a team of biologists and veterinarians from PRC and GEC.  The 27 Black-footed Albatross chicks are expected to fledge from Guadalupe in June.  For the next couple of years (2022-2023), the binational team aims to move up to 42 eggs and 25 chicks per year in order to have at least 100 individuals to form the new breeding colony on Guadalupe." 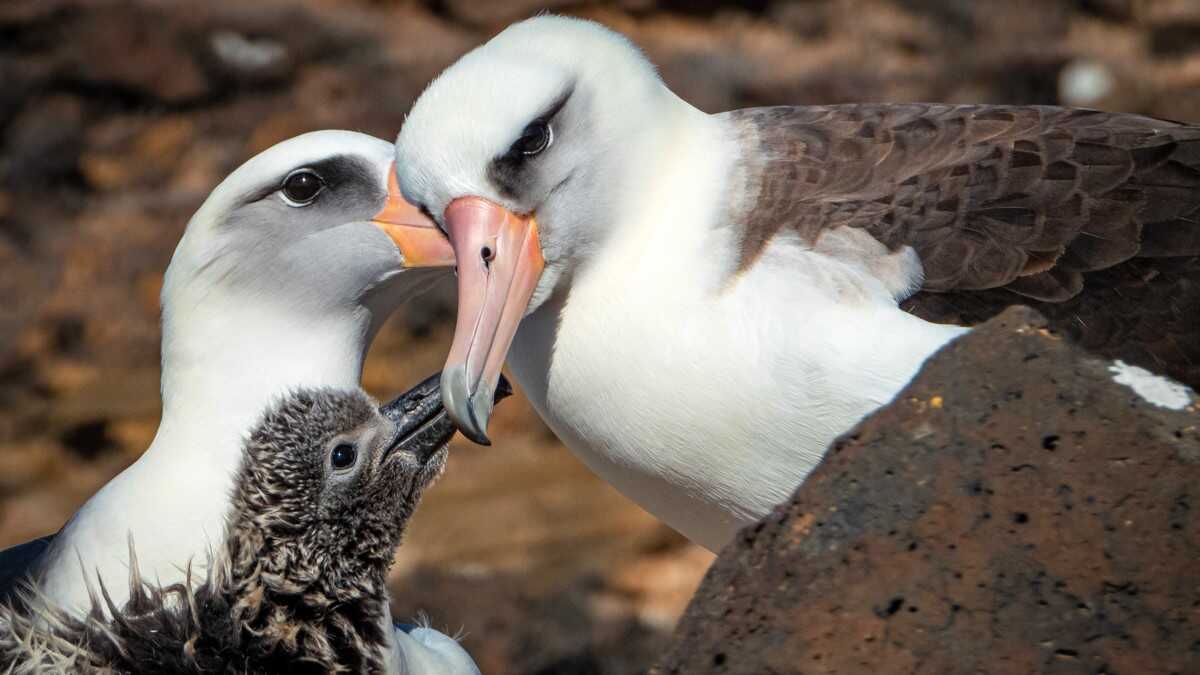 A Black-footed Albatross chick being fostered by a pair of Laysan Albatrosses on Isla Guadalupe, photograph by J.A. Soriano, GECI

"Because Black-footed Albatrosses are faithful to the place where they hatched or were raised from a young age it is expected that this generation of chicks will return to nest on Guadalupe when they are mature.  The reintroduction of Black-footed Albatrosses is a long-term project because albatrosses are long-lived; they will spend their first few years at sea continuously and are expected to begin returning to Guadalupe in three to five years and to begin nesting there in eight to nine years.”

ACAP Latest News will follow the project with interest and bring readers further news as it becomes available.  For a Spanish version of the media release please contact GECI's  This email address is being protected from spambots. You need JavaScript enabled to view it.; see also a report on the reintroduction exercise in Spanish here and watch a news video, also in Spanish, with informative still photos of the translocation exercise included.